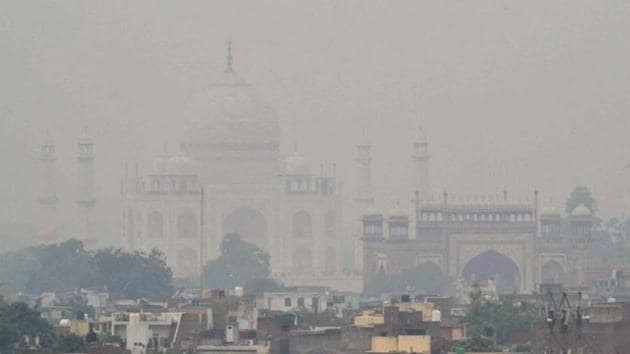 There has been a surge in respiratory problems among residents of Agra. Pic: PTI

Soaring air pollution levels in Agra are playing havoc on one of the wonders of the world. The centuries-old monument, the Taj Mahal, on Sunday (November 7) was enveloped in a smoky haze and was almost invisible to visitors.

Post-Diwali, Agra’s AQI (air quality index) firmly remained in the ‘severe’ category, according to the Central Pollution Control Board (CPCB), said media reports. Delhi too continued to suffer from a post-Diwali hangover, as air quality remained ‘severe’ with the AQI standing at 436, said the System of Air Quality & Weather Forecasting & Research (SAFAR).

The situation has become so dire that the Delhi environment minister Gopal Rai has urged the Centre to hold an “emergency meeting” with Delhi’s neighbouring states to devise a mechanism to deal with crop residue burning, a major reason for the deteroirating air quality.

Meanwhile, Agra reported a surge in the increase of people suffering from respiratory issues. Agra city, known for this beautiful ode to love, has been enveloped in a dense layer of smog since November 4.  Apart from Agra, several cities in Uttar Pradesh such as Baghpat, Bulandshahr, Greater Noida and Ghaziabad too remained in the ‘severe’ air pollution category on Saturday.

Air pollution in cities across the country has plummeted causing concern due to the burning of firecrackers on Diwali, as well as the increased movement of vehicles and stubble burning.n Heal Hg air pollution levels in Agra