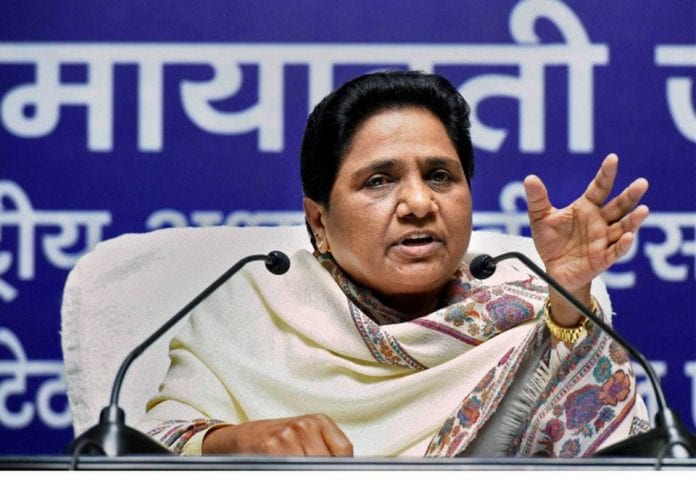 The BSP supremo has emphasised that her party has only tied up with the Shiromani Akali Dal for the Punjab polls, which is also scheduled to be held next year. Pic: PTI

Quelling widespread speculation, Bahujan Samaj Party chief Mayawati tweeted this morning (June 27) that her party will fight the Uttar Pradesh and Uttarakhand state polls, to be held early next year, on their own.

Mayawati’s tweet comes in the wake of media reports claiming that an alliance between the BSP and the Asaduddin Owaisi-led AIMIM in the state is on the anvil.

The BSP supremo further emphasised that her party has only tied up with the Shiromani Akali Dal for the Punjab polls, which is also scheduled to be held next year. The two parties have also finalised the seat-sharing agreement in the 117-member assembly: with SAD contesting in 97 seats and the BSP in 20 seats, the report added.

In her tweet, the BSP leader pointed out that news channels were reporting since yesterday that AIMIM and BSP will fight the upcoming assembly elections in UP together. “This news is completely false, misleading and baseless. There is not even an iota of truth in this and the BSP vehemently denies it,” she tweeted in Hindi.

She added that she would like to make it clear that except for Punjab, the BSP will not contest the UP and Uttarakhand state polls early next year in alliance with any party. The BSP will go at it alone, she said.

Earlier this week, Samajwadi Party chief Akhilesh Yadav said after his bitter experiences with the two big parties like BSP and Congress, that he was also not keen to tie-up with these parties. And, that he would rather team up with like-minded smaller parties.

However, he admitted that a few BSP leaders were in touch with him, but he was certainly not going to repeat the 2019 Bua-Bhatija act with Mayawati since it had flopped badly. According to Akhilesh, the Congress was too weak in UP and they did not have a good experience back in 2017.

SP had given them over 100 seats but they could not win because the people of UP had rejected the Congress, said Yadav.

The Congress managed to win just one seat out of 80 – Sonia Gandhi’s Raebareli seat – in the 2019 Lok Sabha polls. And, the hyped up political combine of Rahul Gandhi and Akhilesh Yadav just fizzled out without much impact.

However, the Congress seems to be placing all their chips on Priyanka Gandhi Vadra. Salman Khurshid, Congress general secretary in-charge of Uttar Pradesh, has underscored that she is their “captain” in UP and will lead the party.

The BJP, has also rolled up its sleeves and is getting ready for the big electoral battle for India’s biggest and most politically important state. Review meetings have been held with BJP state unit leaders and functionaries and the CM Yogi Adityanath also visited Delhi to meet PM Modi and Amit Shah. Former bureaucrat AK Sharma, known to be among Prime Minister Narendra Modi’s close aides, has been made the BJP’s vice president in Uttar Pradesh.

Though, the party state unit has complained about the CM’s functioning, and there were rumours that there will be a change in guard. But for now, the BJP has decided to contest the UP election under the leadership of Yogi Adityanath as CM and Swatantra Dev Singh as the state president.