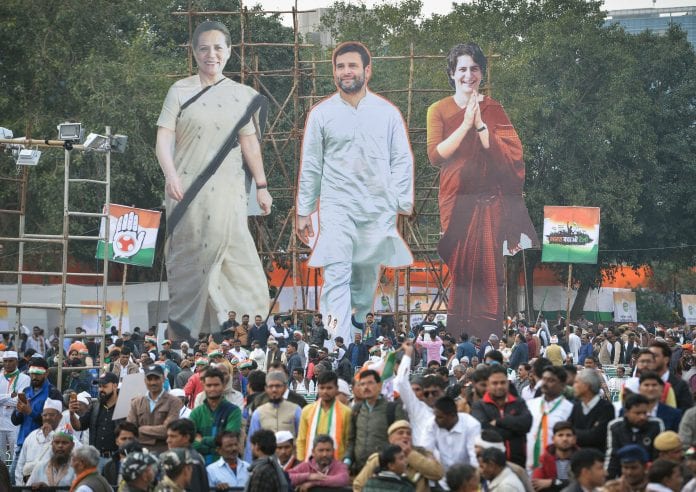 The Congress party’s central leadership seems to have finally run out of patience with Navjot Singh Sidhu, and his tantrums.

A day after the former cricketer stumped his party colleagues by announcing on Twitter his resignation as the Punjab Congress chief, the Congress high command, say sources, has decided against pacifying Sidhu any further. It’s learnt that the party will move on if Sidhu does not budge in a day or two.

Meanwhile, Punjab continues to hog the national limelight with Amarinder Singh having an hour-long meeting with Union home minister Amit Shah, strengthening rumours that the former two-term chief minister could either defect to the BJP or have an electoral understanding with the saffron party which might dent Congress’s prospects in the next Assembly elections.

The Congress’ cup of woes is clearly overflowing.

If Sidhu’s mutiny and Singh’s warm handshake with Shah weren’t enough trouble for the Congress high command to handle, there were also renewed signs of another rebellion by veterans such as Ghulam Nabi Azad, Kapil Sibal and Manish Tewari who, for over a year now, have been urging interim party chief Sonia Gandhi to set the party’s fast imploding house in order.

Azad has written another letter to Sonia, urging her to convene a meeting of the party’s highest decision-making body, the Congress Working Committee (CWC), to discuss the fresh crisis in Punjab and unresolved issues that he and 22 other party leaders had raised in their letter to her last August.

Also read: Decoding Punjab Cong muddle: Why did Sidhu walk out in a huff?

Sibal and Tewari, both part of the so-called G-23 – Sibal said on Wednesday that “at least we aren’t Ji Huzur 23”, implying they weren’t ‘yes men’ for the high command – too went public with their anger over the mess that the Punjab Congress finds itself in after Sidhu’s resignation. Sibal’s criticism was met with protests outside his residence by members of his own party’s youth wing while Azad too is being trolled by Congress workers on social media platforms.

The high command comprising Sonia Gandhi, Rahul Gandhi and Priyanka Gandhi Vadra  —  the latter was instrumental in foisting Sidhu as PCC chief in July despite strident resistance from Amarinder Singh  — has been left both embarrassed and angry over Sidhu’s “betrayal” and strong arm-tactics to have his way in running Punjab Congress and the state government.

However, the absence of Rahul and Priyanka (the former left for Kerala while the latter is on a five-day election tour of UP) who were the principal architects of the ‘oust Singh-bring Sidhu’ campaign, in New Delhi at a time when things clearly were falling apart for the party has also come in for scathing criticism within a section of the party, which has been claiming that the Gandhi siblings “want control over the party but have no roadmap for its revival”.

In Punjab, the high command’s immediate challenge is to resolve the crisis triggered by Sidhu’s resignation and his fresh salvo at newly sworn in CM Charanjit Singh Channi.  Sources say if Sidhu remains adamant on his resignation, the high command is willing to name his replacement “within the next day or two”.

It is learnt that Priyanka had initially made an effort to pacify Sidhu but withdrew her patronage of the rebel leader after he dug in his heels, demanding that some newly appointed ministers and officials in the state government be “sacked immediately”.

What has irked the Congress leadership further, say sources, is the video posted by Sidhu on Twitter on Wednesday (September 29), explaining the reasons for his resignation.

While the Congress is presently being cornered by its political rivals, critics and even colleagues over the crisis, party insiders admit that the repercussions of the present morass may go far beyond Punjab.

“Sidhu was always going to be a difficult person to control because he simply cannot work as a team player. He wants total control. If not the cabinet reshuffle or the administrative appointments – both of which are the prerogative of the chief minister, he would have rebelled over the selection of candidates in the run-up to the elections if the party did not give him a free hand in ticket distribution. The larger problem is the chain reaction that his resignation has triggered. Till Sunday, we were patting our backs over a supposed masterstroke of giving Punjab its first Dalit Sikh CM and isolating Singh, who despite being a tall leader had lost grassroots support. Within 48 hours, we are now fighting on multiple fronts – Sidhu and Singh in Punjab, the G-23 across various states, Mamata Banerjee poaching our leaders and threatening to spoil our electoral chances in Goa and of course, the BJP eager to fish in troubled waters as always,” a senior party functionary told The Federal.

Also read: How Congress’ decay is beneficial to Mamata’s ambition to go national

For now, the Congress has dispatched Harish Chaudhary, the party’s central observer for Punjab, to Chandigarh to find a resolution to the fresh crisis.

Camping at his residence in Patiala, Sidhu, his aides say, has refused to meet Chaudhary or any other party leader unless the ministers and officials he has problems with are sacked. So far, barring half a dozen MLAs and some party functionaries who are loyal to him, a majority of Congress legislators have refused to express any solidarity with Sidhu.

However, the party is wary that if Amarinder Singh opens a front against the Congress and gets an open or even tacit backing of the BJP, several other leaders who are feeling insecure about their victory prospects with the Congress may trigger trouble.

“We had thought that with a change of guard we were back in command. Channi had been told to fast-track fulfillment of poll promises and his cabinet had begun working on that front with announcement of waiver of arrears in electricity bills and ex-gratia for kin of farmers who had died during the farmer protests. Now we have gone back to a phase of uncertainty,” says a veteran Punjab Congress leader.

While the Congress may hope to extricate itself from the situation in Punjab by toughening its stance against Sidhu’s tantrums, appointing a new state unit chief and getting Channi to announce a slew of populist measures, the fission reaction that the fresh crisis has triggered for the party beyond the poll-bound states may be difficult to control if it’s allowed to unravel.

A section of party leaders believes that the only way out for the high command now is to be even more disruptive and pay no heed to in-house critics like Azad and Sibal or to the tantrum-throwing mavericks like Sidhu and Singh.

“The only way is to go on the offensive. The G-23 wants the leadership issue settled so Rahul must take up the challenge and return as Congress chief. This will make the argument of the party working under an interim chief redundant and then the high command can start with an aggressive clean up by ensuring that drawing-room commentators like Azad and gang as well as ideologically fickle leaders who only want post and power are shown the door. There is no other way,” says a party MP close to Rahul.