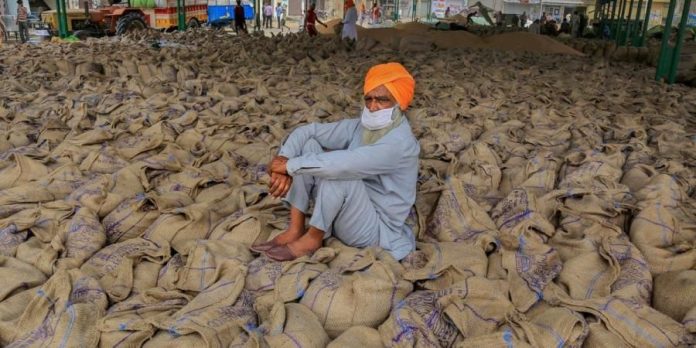 A Punjab farmers sits over sacks of wheat at a mandi in the state. | PTI File Photo

Punjab has surpassed all records in wheat procurement for the rabi season at a time when the farmers’ agitation against the new farm laws is nearly six months old and the state is in the grip of COVID-19.

The Indian Express reported that government agencies have procured 132.08 lakh metric tons of wheat, 2 lakh metric tons more than the target set by the state. More than 9 lakh farmers have received over ₹23,000 crore directly into their bank accounts. It was the first time in Punjab that farmers were paid directly instead of through arhtiyas, or middlemen. This rabi marketing season, which began on April 10 and ended Thursday (May 13), was 12 days shorter than the last year.

Food Corporation of India’s records show that this is the highest wheat procurement in Punjab’s history. The number was under 100 lakh metric tons till 2009-10. At over 9 lakh, the number of farmers who came with their grain to the mandis this year is also higher than the figure of 8.8 lakh last year.

While the procurement was less in the state’s Malwa region, the ground zero of the farmers’ agitation, the hike in the Doaba and Majha regions made up for it. The districts that saw less procurement compared to the last year slightly outnumbered those that saw higher.

The Express quoted Ravi Bhagat, director, Department of Punjab Food Supply and Consumer Affairs, as saying that direct payment into the accounts was one of the main reasons for this. “The government has registered farmers on the Anaj Kharid portal and the money was credited into their accounts, not those of arhtiyas… Punjab has also become the first state where the J Form that carries the details about the crop a farmer sells to the government is included in the Digilocker. He is not dependent on a middleman for getting the J form.”

Bharatiya Kisan Union (Dakaunda) leader Jagmohan Singh also said that one of the important reasons why more wheat came to the mandis was direct payment of MSP into accounts.

A Punjab Mandi Board official was quoted as saying that protesting farmers also wanted to take advantage of the MSP (₹1,975 per quintal), believing it may not last. He said more wheat also landed in government mandis due to less private players in the market due to COVID-19.