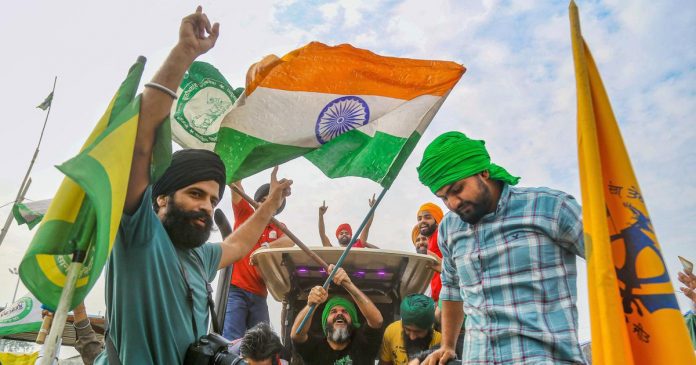 The Samyukt Kisan Morcha, a body of 33 farmers unions, however has distanced itself from the political outfit and said their name should not be used in the election campaign. Pic PTI of farmers struggle

In a highly significant development ahead of the Punjab assembly elections, 22 farmers unions, who had participated in the farm laws agitation under the banner of the Samyukt Kisan Morcha (SKM), are all set to enter the state’s highly-volatile political scene.

This new political party ‘Samyukt Samaj Morcha’ is being led by a senior SKM member, Balbir Singh Rajewa, one of the prominent leaders of the 32 farmers unions that had come together last year to protest against the Centre’s farm laws.

The Samyukt Samaj Morcha, which may team up with the Aam Aadmi Party (AAP), is expected to contest all 117 seats in the February-March Punjab Assembly election. However, the SKM has distanced itself from the political outfit and said their name should not be used in the election campaign, said media reports.

Harmeet Singh Kadian, the leader of the Bharatiya Kisan Union (Kadian) faction told the media that they decided to float a party after there was a lot of pressure from the public. Punjab is facing a lot of problems such as drugs, unemployment and the migration of youth from the state which they want to address, he said.

Kadian said that the SKM, an umbrella body of different groups, had won the agitation against the farm laws. But, when they had returned home there was pressure on them to join politics since here was a feeling that if they could have won that battle, then they could win the election as well, said Kadian, according to news reports.

Meanwhile, farmer leader BS Rajewal too said that they were being pressured to fight the polls. “We will speak to like-minded people who are well-wishers of Punjab,” he stated.

The party had to be strengthened at the village level, said Rajewal, adding that the Aam log (the common people) will be part of the Samyukt Samaj Morcha. He however denied that they were tying up with AAP and dismissed it as only media speculation.

The announcement that the farmers were going to enter the political arena was made after the SKM had completely ruled out any possibility of them contesting any election at this time. The SKM is more of a “platform of more than 400 different ideological organisations” and there was no consensus amongst all the different  organisations. Hence they would not be contesting the polls, the SKM had clarified.

State elections will be held in Punjab (and four other states, including UP) in February-March. Political parties have been going all out to woo the farmers since their votes are seen as crucial to the fate of the current ruling parties in these two states.

Last month, even Prime Minister Narendra Modi had to capitulate after a year-long struggle by the farmers and did a complete U-turn by agreeing to repeal the three offensive farm laws. And this came after his party and he had relentlessly attacked them for being “anti-national”. His grand gesture was viewed as a move to win over the farmers before the state assembly elections in UP and Punjab.