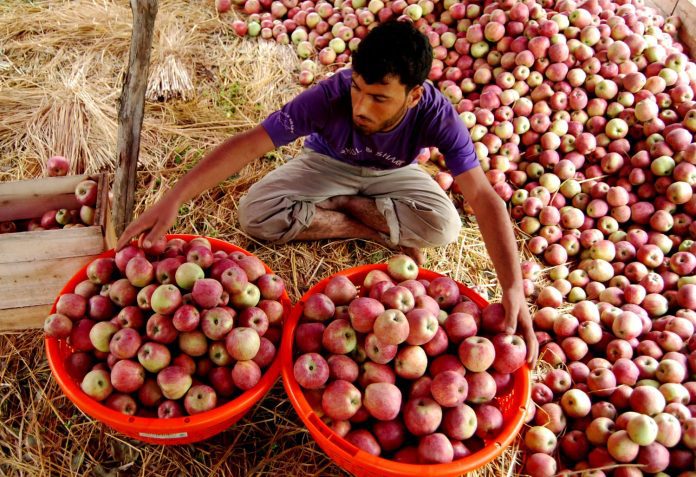 Kashmir is fondly called ‘Iran-e-Sagheer’ (Chhota Iran or prototype of Iran), but the import of Iranian apples into the Indian market has stirred up a raging controversy in the valley.

Apple traders, fruit growers and politicians in the restive region have said that the import of Iranian apples would affect the livelihood of apple growers in the valley and others directly or indirectly dependent on the fruit industry.

Fruit growers and traders say that Kashmiri apples are delicious and are renowned not only for their texture, colour and size, but also because they are not as pricey as American apples, which dominated the Indian markets earlier.

One overriding concern expressed by apple growers in the valley is that the prices of local apples have considerably come down because of the stiff competition from Iranian apples. This is causing economic losses to the local farmers.

Also read: Nearly 170 acres of land in Kashmir to be turned over to armed forces

Abdul Shakoor Wani, a fruit grower and trader from south Kashmir’s Shopian district, told The Federal that fruit mandis are meant for the benefit of the local farmers and their produce, but the presence of Iranian apples was causing a “disruption”.

“Earlier, the Iranian apples were imported and brought to the Indian market via Afghanistan and discreetly marketed as Afghani apples. Afghanistan does not produce apples. Our demand is to stop the illegal entry of Iranian apples into the market,” Shakoor Wani said.

India could manage to get Iranian apples through Afghanistan under the South Asian Free Trade Area (SAFTA) agreement.

The SAFTA draft agreement was discussed at the twelfth summit of the SAARC in the Pakistani capital, Islamabad, in January 2004, thus paving the way for a free-trade area of 1.6 billion people in India, Pakistan, Afghanistan, Bhutan, Nepal, Maldives and Sri Lanka. At the time, the idea was to significantly reduce custom duties on all traded goods among the SAARC members. The SAFTA accord came into force formally on January 1, 2006.

Since both Afghanistan and India are members of the SAARC and have signed the SAFTA agreement, they do not impose duty on imports.

One of the many demands made by Shakoor Wani is that the import of Iranian apples through the “illegal route” must stop. Moreover, according to Wani, “if Iranian apples are brought in legally, then proper taxes should be levied so that no economic losses are incurred on Kashmiri produce.”

According to Kashmiri traders, the Iranian apples were imported to India through Afghanistan earlier, and now from Dubai to Gujarat in ships.

According to Kashmiri apple growers, a 10 kg apple box from Iran costs around ₹600, while a box of the fruit of the same weight, grown in Kashmir, costs between ₹800 and ₹1,000. Other quality apple boxes of 10 kg, each, from north Kashmir’s Sopore and south Kashmir’s Shopian can cost between ₹1,000-₹1,200.

Kashmir’s fruit growers either demand a blanket ban on Iranian apples or the imposition of proper taxes on the imported fruit, with the aim to put a stop on potential losses to Kashmir’s apple industry. “Why no custom duty is imposed on Iranian apples, if these are brought here via sea?” asked one of the local apple growers.

This view is shared by economic experts.

Ejaz Ayoub, Kashmir’s well-known economic analyst, argued that “the downward price shock on account of supply glut of apples from Iran will have a cascading impact spilling beyond the horticulture sector.”

“Besides contraction of the ₹8000-₹10,000 crore apple industry, the impact on the forward integrated manufacturing sector is going to be lethal. Moreover, it will directly impact the size of consumption in the trading sector,” Ayoub told The Federal.

“The trading sector is already hit by demand shock. It is expected to further shed labour from its duties. I see a domino’s effect on demand and employment getting replicated across the economy,” he added.

The aggrieved apple growers contend that the presence of the Iranian apples in huge quantities in the Indian market would jeopardise the Kashmir Valley’s market share in the near future if the imported fruit remains tax free.

Similar complaints are pouring in from Himachal Pradesh, Nagaland and other states. However, there are some voices which understand the issue from a different perspective.

“Trade is all about quality, profit and healthy competition. The Iranian apples are of good quality, and not costly. Why wouldn’t a consumer be interested in buying Iranian apples?” said one of the members of an influential trade body based in Srinagar. Pleading anonymity, he said that “India has trade agreements with many foreign countries. Such decisions are linked to foreign policy and economic interest. We have to understand the bigger picture.”

That said, another concern expressed by the Kashmiri apple growers is about the huge quantity of apples stocked up in cold stores. There is a possibility of their fruit rotting, in case it remains unsold due to tough competition with Iranian apples, the traders fear. Kashmir’s weather conditions allow apples to remain in storage for about four-to-six months.

Unionists in Kashmir have also stepped in to speak up for the apple growers.

The Jammu and Kashmir National Conference (NC) said that the interests of orchardists should be safeguarded. Imran Nabi Dar, NC’s spokesperson, said, “the quantum of cheap Iranian apples entering India illegally is eating into the Kashmiri apple’s market share. Losses incurred due to the illegal import of Iranian apples into Indian markets has resulted in a dip in demand for local apple produce as a result of which over three crore apple boxes are lying unsold in Kashmir division.”

“The situation, therefore, demands that the illegal and tax-free arrival of Iranian apples via Afghanistan/Dubai be regulated in order to save Kashmir’s horticulture industry,” Dar added.