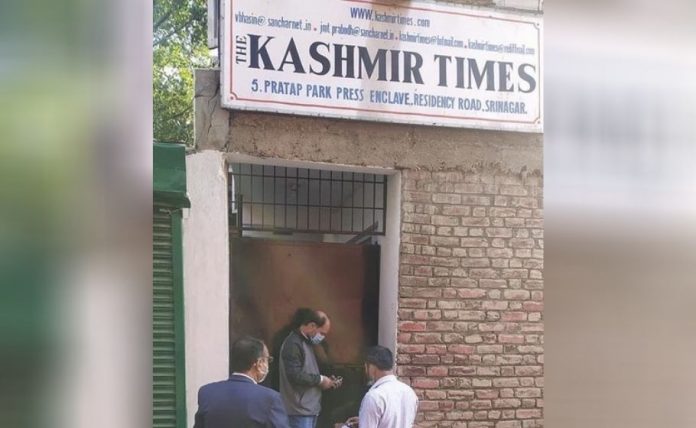 The Estates Department of the Jammu and Kashmir administration on Monday (October 19) sealed the Srinagar office of Kashmir Times, a prominent English daily in the Valley, without stating any reason for the move, reported PTI.

The office space, located at Press Enclave allotted to the daily in early 1990s, according to The Indian Express. This was one of the two properties the daily was allotted, it said. The newspaper is headquartered in Jammu and is published from both the regions of the Union Territory.

Today, Estates Deptt locked our office without any due process of cancellation & eviction, same way as I was evicted from a flat in Jammu, where my belongings including valuables were handed over to "new allottee". Vendetta for speaking out! No due process followed. How peevish! pic.twitter.com/J5P0eKxvbx

The owners of the newspaper, according to PTI, claimed no notice of cancellation or eviction was served on them and “nothing in writing” was given to them. “Our office in Srinagar was locked without any due process of law. No notice whether of cancellation or eviction was served to us,” Kashmir Times owner Anuradha Bhasin told the news agency over phone.

Bhasin said they had heard murmurs about the government planning to evict them from the building at the Press Enclave a month back, but there was no formal communication from the Estates Department. “We had approached the Estates Department and asked them to please serve us the order, but they gave us nothing. Then we approached the court, but no order has been given even there,” she said.

She said the locking up of the Srinagar office of the newspaper was something similar to her recent eviction from a flat in Jammu. “The government has the right to evict an allottee, but there is a certain criteria and they have to follow the due process,” she said.

However, the due process was not followed in my particular case, Bhasin said, terming the move as “vendetta” against her “for speaking out against the government and moving the Supreme Court against media restrictions in Jammu and Kashmir after the Centre abrogated Article 370 in August last year.”

The day I went to court last year, that very day, the state government advertisements to Kashmir Times were stopped, she said.

Officials of the Estates Department, however, said they only “took possession of a house allotted to Ved Bhasin, the late founder of the newspaper, according to The Indian Express.

The department’s deputy director Mohammad Aslam told the newspaper that Ved Bhasin was allotted two buildings, of which one was an office and another a residence. Notices were issued following Ved Bhasin’s death for them to vacate the house, he claimed adding that they themselves had handed over the house to them.

Meanwhile, the move met with criticism from the mainstream political parties with PDP chief and former CM Mehbooba Mufti too terming this as “vendetta”.

Anuradha was one of the few local newspaper editors in J&K who stood upto GOIs illegal & disruptive actions in the state. Shutting down her office in Srinagar is straight out of BJPs vendetta playbook to settle scores with those who dare to disagree https://t.co/yyZYlw4Me8

“Anuradha was one of the few local newspaper editors in J&K who stood upto GOIs illegal & disruptive actions in the state. Shutting down her office in Srinagar is straight out of BJPs vendetta playbook to settle scores with those who dare to disagree,” Mufti said retweeting Anuradha Bhasin’s post.

This explains why some of our “esteemed” publications have decided to become Government mouthpieces, printing only government press handouts. The price of independent reportage is to be evicted without due process. https://t.co/Vs7nfWWd4h

Another former CM and NC vice president Omar Abdullah tweeted: “This explains why some of our “esteemed” publications have decided to become Government mouthpieces, printing only government press handouts. The price of independent reportage is to be evicted without due process.”

National Conference is not ‘Gupkar Gang’ for BJP in Kargil alone