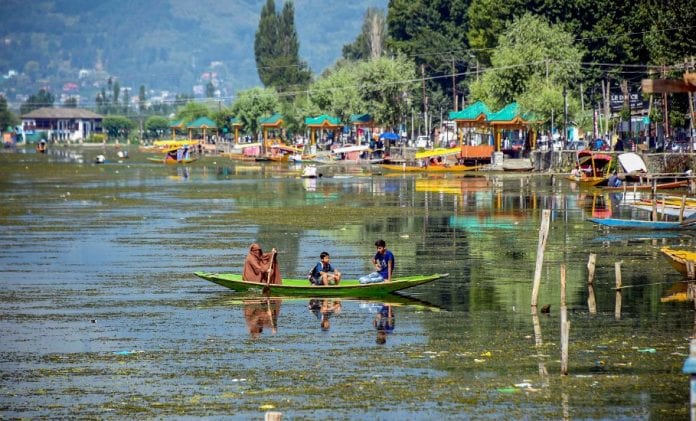 The picturesque Kashmir Valley surrounded by the snow-capped mountain peaks receives over a million tourists and pilgrims annually even with its uncertain political landscape, but less than 18,000 tourists have visited the region since August last year.

With no encouraging signs of the situation limping back to some semblance of normalcy, Kashmir’s tourism industry is in shambles.

Apart from the United States and the United Kingdom, foreign tourists from top European countries such as France, Germany, Italy, the Netherlands and Spain visit Kashmir during summers as well as winters. Besides, foreign nationals from southeast Asian countries like Malaysia, Singapore, Indonesia, Thailand and Vietnam also throng the region’s tourist resorts in decent numbers.

Documents from the Jammu and Kashmir Tourism Department reveal that from January till April this year, only 17,682 tourists have visited the Valley. Last year, during the same period, Kashmir witnessed the arrival of 1,24,050 tourists. And, in 2018, 1,65,248 tourists had come in the first four months of the year.

In the words of a senior official of tourist department, “This steep decline in Kashmir’s tourist arrival has devastated the tourism sector.”

Faiz Bakshi, one of Kashmir’s leading businessmen, owns a hotel that has about 80 rooms. During the peak tourism season in Kashmir, his hotel ‘Shangrila’ in Srinagar’s Sonwar has full occupancy. Bakshi says that for last 11 months, since last August, when the region lost its semi-autonomous status and statehood, not a single room of his hotel has been booked.

“All the rooms are lying empty. Every single room is staring at me,” Bakshi told The Federal, adding, “I do not see things returning to some sort of normality anytime soon.”

The tourism industry stands crushed. “All tourism players are traumatised. And businesses are devastated,” said Bakshi, who served as the Secretary General with the influential trade body, Kashmir Chamber of Commerce and Industries (KCCI).

He is not alone in lament.

Related news: In Kashmir, ‘democracy and morality can wait’: Echoes of betrayal

Sheikh Ashiq, president of the KCCI, said that Kashmir has sadly moved from one lockdown to another. “Kashmir was shut from August till December due to August 5 (decision). Some sectors did open up briefly in wintry January till early March, but then we were hit by the COVID-19 pandemic,” he told The Federal.

In its preliminary report, the KCCI had estimated economic loss worth ₹18,000 crore between August and November in 2019. Going by the same approximation, Kashmir’s economy would have suffered over ₹55,000 crore from January till June this year.

“Honestly speaking, from being a ‘dream destination’, Kashmir’s tourism has now become a ‘first victim’ of the situation since August last year,” Ashiq said.

According to him, he personally toured many countries, including Malaysia, to persuade foreign nationals to visit Kashmir. “Initially, the tour operators there were super excited and diverted a lot of traffic to Kashmir, but after what happened since August 5, they have lost interest,” he said.

Houseboat owners also have similar stories to share. Some of them had to earn their living by briefly switching to other professions to put food on the table for their families.

Related news: One cannot ask Why, What, Where, When, Who and How in Kashmir

Gulzar A. Malik, a driver hailing from the outskirts of Srinagar, had bought two comfort cars on bank loan to ferry tourists from one destination to another. As a taxi driver, he would earn a decent living to feed his family comprising his wife and three children. “I was out of work for eight months since August last year. First, I sold one of the cars. Then, I temporarily became a labourer at construction sites to provide food for the family,” he said.

Before the writing down of Articles 370 and 35 (A) in early August last year, the J&K administration, in a series of advisories, had asked both foreign and domestic tourists, Amarnath pilgrims and migrant workers to leave Kashmir and return to their homes with immediate effect. This, according to the KCCI, devastated Kashmir’s tourism industry.

In similar advisories issued in mid-March this year, the J&K administration banned entry of foreign tourists in the region as a “precautionary measure in view of the coronavirus outbreak around the world.” Baseer Ahmad Khan, one of the advisors to the Lieutenant Governor had issued orders in this regard. Secretary Tourism, Director Tourism, Kashmir and Jammu, and all the Deputy Commissioners were directed to “ensure implementation of the order with immediate effect.”

Tourism contributes roughly five to six per cent of the region’s Gross Domestic Product (GDP). However, at least 30 per cent of the Kashmiri population directly or indirectly earn their livelihood from the tourism sector.

Related news: Being a Kashmiri outside Kashmir, inside India

Each year, over half-a-million tourists visit Kashmir. Foreign tourists are considered high-end tourists who spend a lot of money on five-star hotels or lavishly designed houseboats in the Dal Lake, which is almost in the lap of the Zabarwan mountain range. Besides this, between three to four lakh pilgrims visit the holy Amarnath cave in south Kashmir’s Pahalgam area.

A large section of the Kashmiri population depends on sectors like horticulture (cultivation of apple and almond crop), handicrafts, saffron crop, paper mache and shawl industry. Of about 80 lakh inhabitants in the Kashmir Valley, over four lakh work in the government sector.

The economy of Kashmir has hit the rock bottom as tens of thousands have lost jobs, especially those working in the tourism, hospitality and IT sectors, according to the KCCI report.

Given the continued tensions at the Line of Actual Control (LAC) in eastern Ladakh, there are little signs of things improving. “Sadly, we will be facing huge losses in coming times,” the KCCI president concluded.