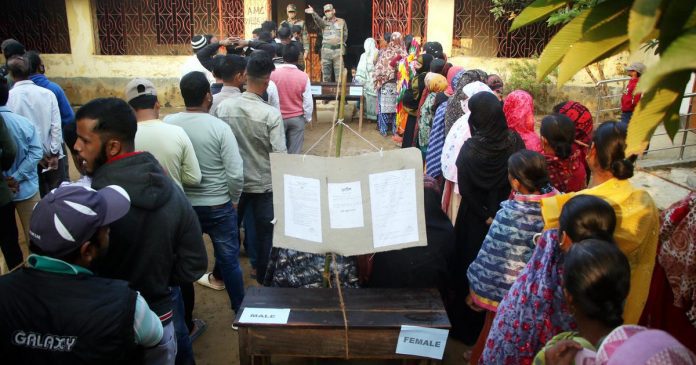 Never in the recent past has any local body election assumed as much political importance as the one in Tripura held on Thursday (November 25) amidst allegations of rigging and violence despite the Supreme Court’s directive to the state government to ensure peaceful polling.

A day after the contentious polling, the Trinamool Congress moved the Supreme Court on Friday seeking a probe by a court-monitored panel into the alleged large-scale violence during the polls.

The CPI(M) too decided to move the apex court for the state government’s alleged failure to adhere to the court’s earlier directive as there had been reports of rigging, attacks on candidates and intimidation of voters.

The TMC in its petition sought postponement of counting of votes and announcement of results, and a probe by a court-monitored panel into the incidents of violence.

Two party candidates Shymal Paul and Tapan Kumar Biswas and the son of another candidate contesting in Agartala Municipal Corporation (AMC) were among those injured in poll-related violence.

Tripura TMC convenor Subimal Bhoumik said that the majority of the electorate could not exercise their franchise free and fairly due to the “violence perpetrated by the BJP”.

Also read: SC asks Tripura govt what they are doing to ensure free and fair elections?

The CPI(M) Tripura general secretary Jiten Chowdhury claimed that the BJP restricted his party workers from functioning smoothly and in the process more than 30 people were injured, some of them critically.

Incidentally, even the rebel BJP MLA Sudip Roy Barman accepted that “untoward incidents” did take place during the polling.

The state election commission, police and the ruling BJP however claimed that the polling was held peacefully in the 222 wards of the AMC and 13 other urban local bodies of the state.

The election to the ULBs conducted in 644 booths across the state was by and large peaceful, except for some stray incidents in Agartala and Melaghar, said a press release issued by the Tripura Police.

BJP Tripura spokesperson Nabendu Bhattacharjee, refuting the allegations of violence and rigging, said sensing defeat, the opposition parties are trying to malign the image of his party.Amidst these claims and counter-claims, what has become prominent is the sharp rise in political violence and overzealous police action against critics and political opponents that Tripura has been witnessing since September.

The string of violence in the run up to the urban body elections saw attacks on media outlets, the CPI(M) offices, motorcades of TMC MPs, houses of opposition party leaders and workers among others.

Ghosh was brought to the police station as a complaint was lodged by a BJP worker against her for shouting “Khela hobe” (the game is on) and claiming in a mocking tone that there were not even 50 people in the gathering when her convoy was passing by the venue where Chief Minister Biplab Deb was addressing a public meeting.

For the “felony”, she was booked by the police on charges of attempt to murder and promoting disharmony between two groups, clearly slapping stringent laws against a venial offence.

The high drama inside the police station unfolded close on the heels of the Supreme Court’s directions to the Tripura police to ensure that no political party is prevented from exercising their rights in accordance with the law for campaigning in a peaceful manner.

After the police-station incident, TMC leader Abhishek Banerjee, whose motorcade was also once attacked by the alleged BJP workers, accused the Tripura government of disregarding Supreme Court orders on the rights of political parties to hold peaceful programmes.

On the polling day itself, the apex court had directed the Union home ministry to provide two additional companies of the central armed police forces to secure the polling booths following complaints by TMC and the CPI(M) that their candidates and supporters had not been allowed to cast votes and that there was serious breach of law and order.

Bengal model and the catch

Though Tripura was not entirely immune to political violence in the past, the intensity and scale this time has been unprecedented, prompting many to suggest that the north-eastern state seems to be replicating the dubious model of politics prevailing in West Bengal for over five decades now.

West Bengal topped in political murders in 2018 and 2019 as per the latest NCRB reports.

The malpractices during Thursday’s polling, the spate of violence in the run up to it and the BJP winning six municipal bodies uncontested as opposition candidates were allegedly either prevented from filing nomination or intimidated to withdraw candidatures were a throwback to similar situations witnessed during the 2018 panchayat polls in West Bengal.

Violence and uncontested victories in West Bengal’s rural body polls three years ago stood out even amidst the state’s infamous track record of electoral violence, just as Tripura set a new-low in its political culture this time.

The beleaguered BJP in Tripura, which is facing a resurgent opposition as well as rebellion within, would do better if it takes some lesson from the consequence of 2018 violence in Bengal with which the north-eastern state shares ethnic, political and cultural proximity.

The BJP’s phenomenal rise in Bengal in 2019 Lok Sabha elections is largely attributed by many political observers to the venting of pent up anger by a large section of electorates against the TMC for not allowing them to cast votes during panchayat elections.

Many TMC leaders too subsequently accepted the theory and apologised for the excesses committed during the panchayat polls. The party strongman and its Birbhum district chief Anubrata Mondal admitted the mistake in public earlier this month.

Many in Tripura BJP also now feel that the party might have to pay a heavy price in 2023 for “resorting to violence” to guard its turf. Two BJP MLAs Sudip Roy Barman and Ashish Saha publicly condemned the violence, apprehending its adverse impact on the party’s future poll prospects.

“The untoward incidents witnessed during the civic body polls will have its repercussions for the party in the 2023 assembly elections,” Barman said.

The BJP leaders have reason to worry. Congress, which ruled in Tripura in 1991 unleashed widespread violence in the Lok Sabha elections then after the death of Rajiv Gandhi. Late Congress leader Santosh Mohan Dev was held responsible by the opposition parties for the “criminalisation” for which he had earned the infamous sobriquet “Sontrash (terror)” Mohan Dev.

“It’s not a mere coincidence that the Congress lost the subsequent assembly election in 1993, never to return to power in the state again,” says former Congress MLA Tapas Dey.