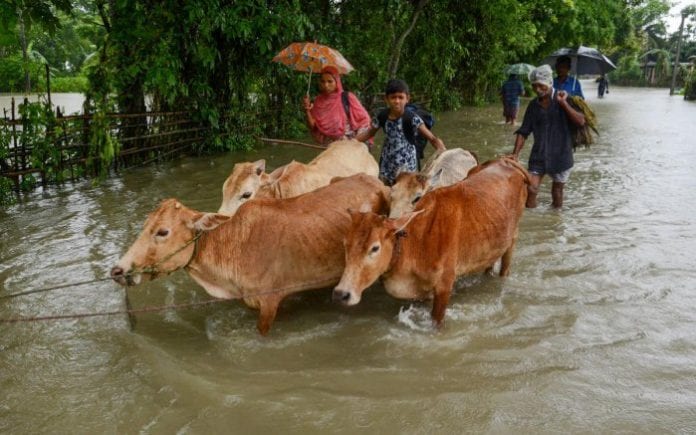 The narrative set up by the Assam government that the Assam Cattle Preservation Bill, 2021 will only regulate the sale of beef products and will help to usher in harmony has been trashed by the opposition parties and legal experts. They say the bill, if passed, could open a Pandora’s Box in terms of law and order and communal harmony.

The legislation proposes to ban the cattle slaughter and sale of beef in areas in the state where Hindus, Jains and Sikhs are in a majority or within a 5-km radius of a temple or satra (Vaishnavite monasteries). It also proposes to allow inter and intra-state transportation of cattle for slaughter only after due paperwork.

Chief Minister Himanta Biswa Sarma, in the ongoing budget session of the Assam Assembly, has said that the Bill will usher in a new era of communal harmony and regulate beef consumption in urban areas.

Referring to the Bill, senior Congress leader and leader of the opposition in the assembly Debabrata Saikia says that the 5 km-rule is ambiguous and can result in communal tension.

“There is a proposal such as a stone can be laid for a temple and a temple built by any individual or organization anytime. This can spark communal tension. There are many such issues in the bill,” said Saikia.

“The bill doesn’t define a ‘temple’ clearly. For instance, one can build a temple anywhere and at any time; that’s very easy to do,” said Pankaj Pratim Dutta, a lawyer of the Gauhati High Court.

“This rule can be exploited by miscreants to disrupt communal harmony at a place. One can set up a temple in the vicinity of a place with sizeable Muslim population overnight, then what will happen?” said Dutta.

He also points out apparent contradictions in various sections of the proposed legislation. “These are contained in sections 4, 5 and 6 of the bill. While section 4 mentions a complete ban on slaughter, section 5 and 6 mention about certificate from a registered veterinary officer,” said Dutta.

“If the bill becomes law in this form, it would be prone to misuse by miscreants,” added Dutta.

Opposition MLAs, too, have expressed displeasure with the provisions of the bill, saying they will bring amendments. “The bill seeks to polarize the society, and is not aimed at respecting or protecting the cow,” said a senior AIUDF MLA.

He also expressed the fear that the proposed legislation could give rise to cow vigilantism. “A question remains as to whether it would trigger mob lynching and cow vigilantism as seen in other states,” said the MLA.

The Opposition is exploring legal options, and Saikia says a team of legal experts is examining the bill which will replace the Assam Cattle Preservation Act, 1950.

The Bill mentions stringent non-bailable punishment, not less than three years in jail and/or a fine that could be between Rs 3 lakh and Rs 5 lakh. For repeated offences, the punishment is proposed to be doubled.

As per the 1950 Act, cattle slaughter is allowed only for cattle “over 14 years of age” or those “unfit for work” in Assam subject to a “fit-for-slaughter certificate” issued by a local veterinary officer after examination. Under the new law, the same approval certificate for all cattle is required. However, it adds that a cow cannot be slaughtered regardless of age.

The ruling BJP government has tried to make it an emotive issue and has consistently brought it up as the symbol of Hindu identity.

Meanwhile, the Assam government is also exploring sex-sorted artificial insemination to ensure production of more cows than bulls to end the cattle slaughter.

The bill is also likely to impact farmers. Cattle are an investment and an asset, which can be converted into hard cash in case of any financial emergency or unforeseen circumstances.

Many organizations working on rural livelihood say the bill will badly affect marginal farmers, especially those living along the border areas.

Citing an example, Luit Goswami of the Rural Volunteers Centre, an organization working on livelihood issues in Assam, said the livestock (cows, buffaloes and goats) and poultry of a marginal farmer is the only disposable asset they hold, and is the first thing to be traded for cash in an emergency.

“There is a whole economy involved in the trade, and the sale-purchase restrictions will lead people to abandon cow rearing,” said Goswami.

“Farmers also sell their cattle to get money to buy new ones, and this is a continuous cycle. Such a bill could severely impact the livelihood of these people,” says Goswami.

The need of the hour is support for farmers. The state government should look at ways to provide insurance for the cattle and also give compensations to farmers and rural households for the cattle lost, Goswami said.