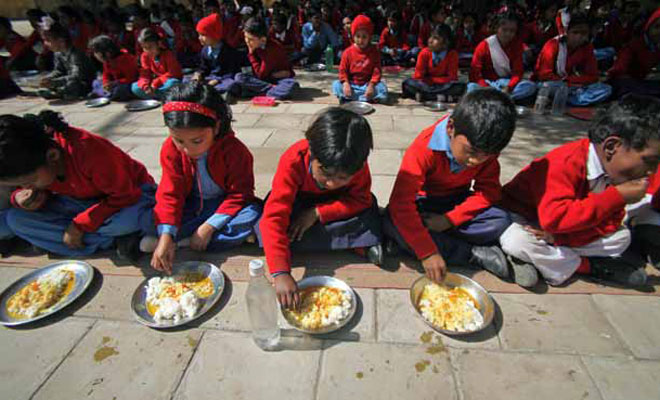 If the plan to hand over the mid-day meal scheme to ‘Akshaya Patra’ goes through, the children of the island will have to go for a complete vegetarian menu even without garlic and onion

The Lakshadweep administration’s move to cut meat from the mid-day meal menu in Lakshadweep is reportedly part of a larger commercial plan – to hand over the entire scheme to Bangalore-based NGO, Akshaya Patra, run by ISKCON (International Society for Krishna Consciousness), an organisation that has already been criticised by food rights activists for the deficiency of nutrition in the meals provided by them.

Akshaya Patra provides a vegetarian menu in their school lunch programme strictly omitting even garlic and onion. The documents accessed by The Federal prove that the Lakshadweep administration is planning to impose a food culture quite unfamiliar to the island’s residents. A meeting of the Union Territory’s monitoring committee and District Task Force for the implementation of the mid-day meal programme was held on January 27, 2021 at the Secretariat conference hall in Kavaratti.

According to the minutes of the meeting, a letter has been sent from the planning and statistics department dated January 8, 2021 that an action plan has been submitted to transfer Lakshadweep’s mid-day meal scheme to Akshaya Patra.

All the District Panchayat members who had participated in the meeting unanimously objected to this proposal which is recorded in the minutes. “Now we are providing a mix of vegetarian and non-vegetarian food to children. There is mutton/chicken, egg, fish, fruits, vegetables, rice and dal in the menu. We were asked to omit meat from the menu, but we objected to it,” said Noorjahan, one of the District Panchayat members of Kavaratti.

Talking to The Federal, Noorjahan expressed deep concern that the administration was trying to impose a completely vegetarian meal upon the children. “We agree if they want to avoid beef, but we insisted that either chicken or mutton should be included as it is very necessary to ensure sufficient protein intake. But they insist we should avoid meat completely. They earlier told us that fish and egg will be included in the menu, but we are very sceptical about that too now,” said Noorjahan.

So far there is no clarity on the changes in the menu of the mid-day meal being provided to the children. If the plan to hand over the mid-day meal scheme to ‘Akshaya Patra’ goes through, the children of the island will have to go for a complete vegetarian menu even without garlic and onion. The Lakshadweep administration has not clearly spelt out their plan in connection with the mid-day meal programme as yet.

In the press conference held in Kochi, Askar Ali, the District Collector of Lakshadweep, told the media that the intention of excluding meat from the menu is to ‘help the fishermen by including more quantity of fish’.

When The Federal contacted Askar Ali over the phone, he refused to confirm what the new proposed menu would be. While quizzed about the plan to bring Akshaya Patra on board, the collector said that the administration is exploring all the possible options.

“The menu will be decided by a committee headed by the District Collector, and we have been exploring what would be the best for the children,” he said. Is there any flaw in the existing system and is there anything to be corrected?

“The existing system is good. Children are getting good food, but we want to change the system of teachers directly monitoring the mid-day meal. We want to give it to an external agency to get a better result,” admitted the District Collector. The total number of children accessing the mid-day meal in Lakshadweep is only 12,000 across 62 schools.

According to local body members, they don’t face any difficulty in running the programme with the Central aid and local funds. The people of Lakshadweep fail to understand the rationale behind bringing an external agency which is not capable of meeting the requirements of the children into the island.

The Akshaya Patra’s programme – eliminating class room hunger – has been widely criticised by many food right activists in other states.

“There is a serious crisis of malnutrition among the children accessing the mid-day meal provided by them. A majority of the children studying in government schools are from Dalit, Adivasi and minority communities. The omission of meat, egg, onion and garlic from the menu is only based on their religious reasons. The civil society actors and even the State Food Commission of Karnataka have consistently objected to this programme,” observed Dr Sylvia Karpagam, a public health doctor who is part of the Right to Food campaign in Karnataka.