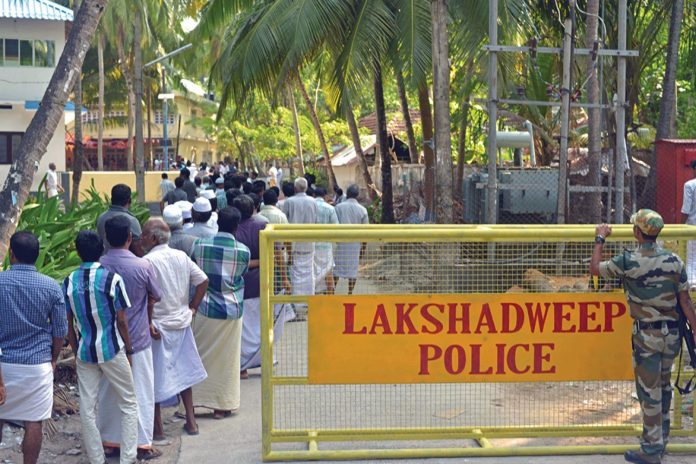 The proposed beef ban and land aquisition in the name of tourism are widely criticized as provocative steps. File Photo

Lakshadweep’s new Administrator Praful Khoda Patel’s draft proposals have drawn huge public outcry with many criticizing them as a product of a communal agenda against the majority Muslim population in the island with an intention to tarnish their culture and tradition. A reading of the proposed laws brings out a larger picture that has multiple objectives aimed at creating polarisation in the guise of development.

Here are the proposed laws in chronological order:

The Goonda Act (January 28, 2021): The draft law named as a The Lakshadweep Prevention of Anti-social Activities Prevention 2021 which is colloquially known as ‘Goonda Act’ provides arbitrary powers to the Administrator of the island. It empowers the police to detain a person for seven days without giving him the opportunity to represent before a court of law.

“It is meant to terrorize people and prevent protests. Goonda Act is the beginning of their saffronisation project in the island,” says Mohammad Faizal, MP from Lakshadweep, while talking to The Federal. He alleged the Administrator was trying to impose authoritarian rule in the island.

Under this law, several offences under IPC which are bailable and those amounting to punishment of less than three years are included. The law empowers the police to keep any person in detention even if there is an apprehension that he may commit an offence causing harm to public interest.

As per this proposed law, a “cruel person” and a “dangerous person” can be taken into custody on the grounds which appear satisfactory to the authority under the Administrator. Section 2 of the draft law defines “cruel person” as one who violates or intends to violate the ‘Prevention of Cruelty to Animals Act of 1960’.

A dangerous person is defined as one who commits a range of offences such as theft, unlawful assembly, mischief, criminal intimidation, breach of trust, criminal trespass and misconduct by a drunken person in public. In addition, the proposed Goonda Act creates a new category of offence as ‘property grabber’. Section 2(O) of the draft law defines ‘property grabber’ as one who illegally takes possession of land belonging to the government or local authorities.

Several of these offences listed in the draft law are bailable; even non-cognizable which attract punishment for less than three years or six months or fine. The offences like ‘unlawful assembly’ are often used against protesters who gather for any social or political cause.

Lakshadweep Town & Country Planning Regulation 2021 (April 28, 2021): The law proposes formation of a development authority which is to be empowered to notify any area of land classifying into any of the four categories as ‘residential, commercial, agricultural and industrial’.

In the guise of development, the authority is empowered to acquire any land notified under the Land Acquisition Act of 2013. Under this law, the government is entitled to declare any land as planning area by notification.

According to Section 35 of the draft law, the people — owners of the notified land — have to seek approval of the town planning authority for any ‘change of use’ of the land. This includes even the alteration of houses in the exterior. The permission is granted only for three years which has to be renewed; failure or delay in renewal will lead to a fine of up to ₹ 2 lakh (section 37). “This literally takes away one’s right over one’s land,” says Advocate Rohit, a lawyer at the Kerala High Court who handles law suits in Lakshadweep as well.

Rohit argues that the new law is brought to overrule the land rights entitled to the tribal community in Lakshadweep by the Land Revenue and Tenancy Regulation Act of 1965 pertaining to Lakshadweep and Minicoy islands. (Only revenue land can be used for any development activity by the government according to this Act).

“Lakshadweep, a tribal majority Union Territory with a 94.8 per cent tribal population should enjoy protection under Article 244 of the Constitution as it is notified as a scheduled area under the Fifth Schedule and PESA Act of 1996,” says C.R. Bijoy, an expert on land rights.

Besides, the authority of town planning is vested in the local bodies according to 73rd Amendment of the Constitution.

Notification for the transfer of powers from the PRIs to the Administrator (May 5, 2021): Many say the notification has close links to the proposed law for creating an authority to have the powers to take over the land. The notification transfers the entire establishments of agriculture, fisheries, animal husbandry, health and education with immediate effect to the hands of the Administrator. The order explains that the transfer of powers to the PRIs in 2012 ‘had overburdened the PRIs which caused an adverse impact upon the efficiency of the execution of schemes’ which is cited as the reason for this current decision.

The proposed beef ban, omission of meat from the noon meal and the lifting of liquor ban in the name of tourism are widely criticized as provocative steps challenging their culture, tradition and religious practices.

The creation of a new category of offence as ‘property grabber’ and bringing the same under Gunda Act, the suppression of fundamental rights, the introduction of a law that empowers the authorities to acquire any land for development and the shifting of powers from the PRIs to the Administrator set the alarm bells ringing for the people of the island.

6:30 AM, 9 December, 2022 0
The dispute over some towns and villages in the Belagavi region has remained unresolved since the reorganisation of states in 1956 on linguistic basis; political parties have, over the years, cashed in on it