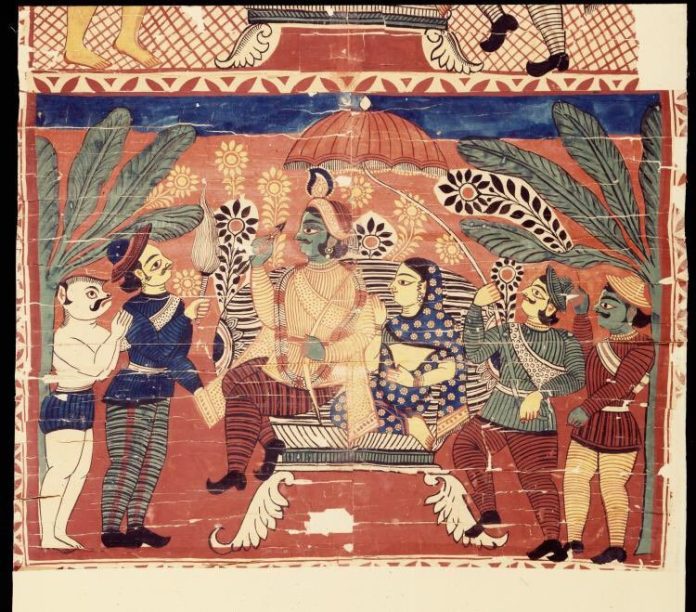 Has Lord Rama been depicted uniformly in the about 300 versions of the epic that exist? Here, Rama and Sita are seen in Ayodhya with a parasol over their heads, painted on a scroll in 1850 in Bishnupur, West Bengal. Image: Twitter

Is there only one version of the Ramayana? Has Rama been depicted uniformly in the about 300 versions of the epic that exist? Is it not true that he has been portrayed as a mortal in some versions, a villain in some and an incarnation of Vishnu in others?

Why did Afghan Muslims collaborate with Rana Pratap in the battle of Haldighati and Rajput king Man Singh side  with Mughal emperor Akbar in the battle? Did Aurangzeb only destroy temples? Was his act guided by religious prejudice? If so, why did he donate the revenues of five villages to the Dauji Maharaj temple in Mathura?

Are Aryans the aborigines of India? If yes, who then built the Harappa and Mohenjo-daro civilisations?

Opinion: Project to ‘rewrite’ Indian history a milestone in 4 decades of RSS efforts

Were Hindus the only victims of Partition? Is it not true that as per the 1951 Census, 72.25 lakh Muslims were displaced by the Partition, as against around 72 lakh Hindus and Sikhs combined?

Does polygamy exist only among Muslims? How many Muslim persons do you know who have more than one wife?

The above and more such probing questions related to Hindu mythology, Indian history and customs have been presented before the public as the CPI(M) has launched a statewide “awareness drive”. The aim is to counter the alleged distortion of history and misinterpretation of religion and customs by the RSS-BJP.

The drive is termed as “People’s history at people’s doorstep – Don’t be a blind believer, ask questions.”

It comes close on the heels of Union Home Minister Amit Shah stressing the need to rewrite history last month while speaking at the 400th birth anniversary celebration of 16th century Ahom army general Lachit Borphukan. In 1671, Borphukan had successfully thwarted Mughal advances in the Battle of Saraighat to defend the Ahom kingdom.

Incidentally, there have been attempts to portray the battle as a fight between Hindus and Muslims despite the fact that the Mughal army in the battle was led by Raja Ram Singh Kachwaha, a Rajput, of Amber.

Ahom’s navy general was Ismail Siddique, popularly known as Bagh Hazarika. The Hindu Jagaran Mancha, a fringe group of the RSS-led Sangh Parivar, even went to the extent of claiming that Siddique was a fictional character.

To prevent what it calls the recasting of history by giving a communal colour by the Sangh Parivar, the Kolkata district unit of the CPI(M) has launched the mass campaign to “ideologically fight” the saffron brigade.

In the first phase of the campaign, it roped in historians, social scientists and thinkers to organise “open-air” history sessions in 25 localities of Kolkata, from December 1 to 5.

“It aimed at exposing the falsehood the Sangh Parivar is spreading to polarise the society for its political benefits,” said Kallol Majumdar, secretary of the CPI(M)’s Kolkata district committee.

“As part of their divisive politics, the RSS and the BJP have been running campaigns against minority communities and democratic forces. Of late, they have also started distorting history to suit their divisive narrative. Our drive is to counter the propaganda by making people aware of the truth,” he added.

Encouraged by the response the drive got in Kolkata, similar history sessions are now being organised in other parts of the state, too.

To take the campaign forward, the party members, accompanied by scholars, will go door to door with “social reality, historical facts and information on mythology” from December 10 to 31, Majumdar told The Federal.

The CPI(M) has also published leaflets for mass distribution to debunk the “divisive” narratives of the BJP and its ideological fountain head, the RSS.

US Senator seeks removal of subsidies on whea...