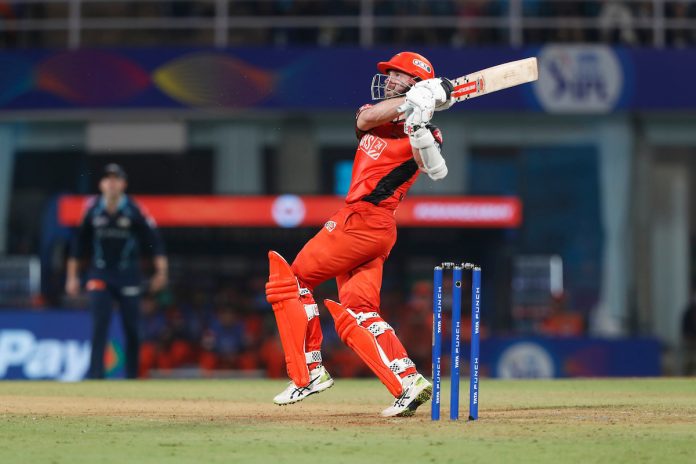 Sunrisers Hyderabad snapped Gujarat Titans three-match winning streak with a eight-wicket win in the Indian Premier League, with captain Kane Williamson leading from the front with a solid 57 while Nicholas Pooran gave the finishing touches with a late flourish here on Monday.

Hardik Pandya’s unbeaten 50 had taken Gujarat Titans to 162 for 7 after being sent in to bat, but that was never going to be enough, as Williamson, who struck his first fifty of the season, anchored the Sunrisers’ chase, as they crossed the line in 19.1 overs.

Sunrisers thus recorded their second consecutive win after defeating Chennai Super Kings on Saturday last, while it was the Titans first defeat after a hat-trick of wins.

Williamson, whose 46-ball knock was studded with two fours and four sixes, first added 64-runs with opener Abhishek Sharma (42 off 32 balls) to lay the foundation of the win.

Williamson then forged a 40-run stand with Rahul Tripathi, who retired hurt on 17, to inch closer to the win.

Pooran (34 not out off 18 balls) sealed the deal with his brutal hitting after Willaimson was out in the 17th over. His innings was studded with two fours and an equal number of sixes. He hit a six to finish the match, taking his side to 168 for 2 in 19.1 overs.

There were two game changing moments. First, in the 13th over, Williamson launched into Hardik Pandya by hitting him for two sixes. Then, in the 16th over bowled by Lockie Ferguson, the Sunrisers’ captain clobbered a six and a boundary, as SRH were cruising towards the target.

Earlier, captain Pandya’s responsible 50 not out off 42 balls helped Gujarat Titans post a competitive 162 for 7 after a top-order failure.

Invited to bat, Hardik first forged a 40-run stand for the fourth wicket with David Miller (12) to rally the innings after the top three batters failed to convert their starts as Gujarat were in a spot of bother at 64/3 after eight overs.

Hardik then added 50 runs with Abhinav Mahonar, who justified his Rs 2.60 crore price tag with his quick fire 35 off 21 balls, to ensure that the Titans crossed the 150-run mark.

Manohar, who got three lives, hit five boundaries and one six in his short stay and particularly launched into T Natarajan (2/34) in the 18th over, where Gujarat amassed 13 runs.

However, it was an unusual Hardik knock, as he mixed caution with aggression to anchor the innings.

The all-rounder announced his arrival with a straight-drive off Natarajan to fetch his first boundary and then was brutal on Umran Malik (1/39), whom he hammered two successive boundaries in the eight over, which fetched nine runs.

In the next over, he clobbered Aiden Markaram for his only maximum over cow-corner but Hardik was devoid of partners, as SRH kept striking at regular intervals.

The SRH attack largely kept Hardik at bay, as they did not allow him to free his arms in the last five overs and as a result it was Hardik slowest fifty in the IPL.

Earlier, opener Matthew Wade earned his first boundary, courtesy a thick outside edge in the first over, where Bhuvneshwar Kumar (2/37) conceded 17 runs, 12 of them extras.

Gill was undone by a stunning one-handed diving catch by Rahul Tripathi at cover, off Bhuvneshwar, in the third over.

Sudarshan, who was looking rusty, became Natarajans first victim, after ballooning to Kane Williamson at mid-off.

Wade, who hammered three boundaries, was trapped in front of the wicket, after he missed a flick, off a fuller delivery by Malik in the eight over.

Then it was Hardik and Manohar show as Gujarat added 82 runs in the final 10 overs.