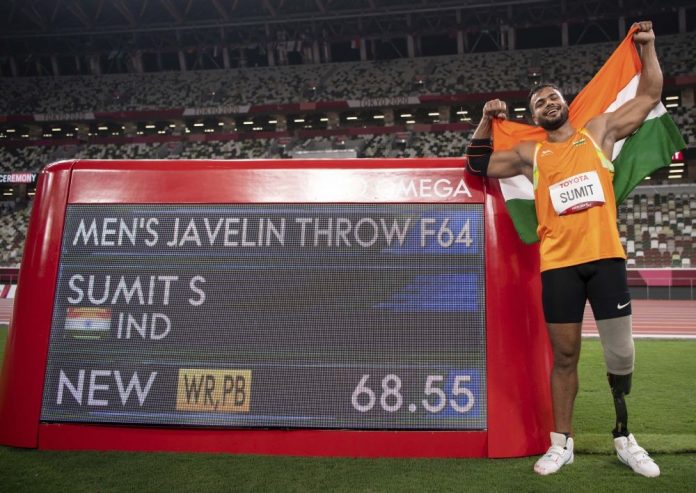 Sumit Antil lay down the marker with his very first throw, which put him in the lead. PTI Photo

It was India’s day at Tokyo Paralympics on August 30 — India’s Sumit Antil won gold in men’s javelin (F64) with a new world record throw of 68.55m. Sumit smashed the world record not once, not twice, but thrice during the final in Tokyo.

Shooter Avani Lekhara earlier made history as she became the first Indian woman to win gold at the Paralympics.

Smit threw 66.95 in his first attempt to set the new world record, before bettering it with his second throw. Then in his fifth attempt, he again set a new world record with a throw of 68.55m. Fellow Indian Sandeep Chaudhary finished fourth in the event, with a best throw of 62.20m.

Sumit Antil lay down the marker with his very first throw, which put him in the lead and also broke the existing world record in the F64 category — also set by him.

He then set the world record again in his second attempt with a throw of 68.08m.

His third and fourth attempts were 65.27 and 66.71 respectively, but he seemed to have already sealed the gold medal, with none of his competitors really threatening his position.

Then, in the fifth attempt, he threw 68.55m to set a world record for the third time in the day and ensure India’s second gold medal at the ongoing Tokyo Paralympics.

It was a good day in javelin throw for India, with Devendra Jhajharia winning silver and Sundar Singh Gurjar bringing home the bronze in the men’s javelin (F46) final earlier on August 30.

With seven medals already, India has already registered its best-ever haul at the Paralympic Games.

German resilience triumphs in high-quality Wo...