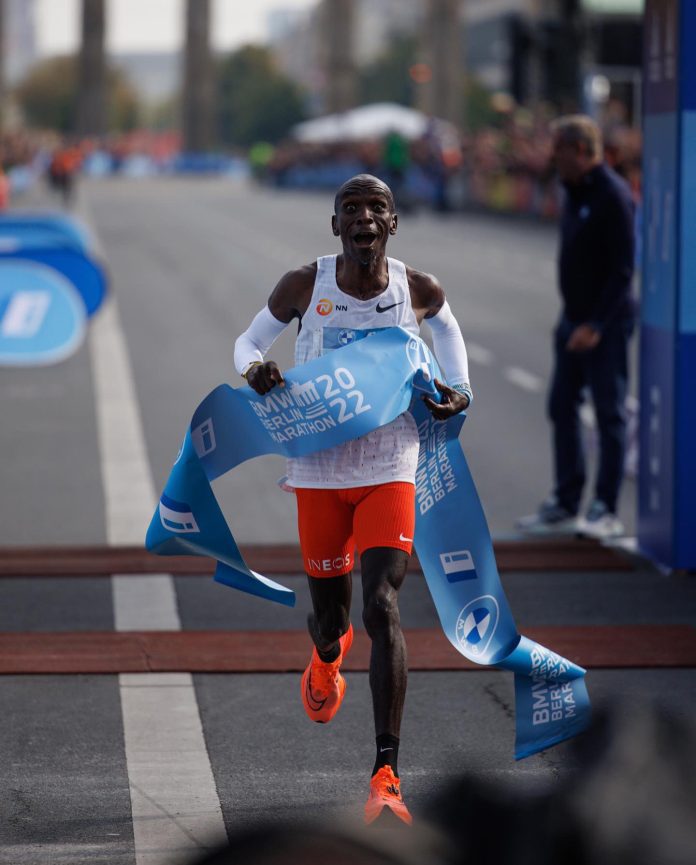 When Kenya’s Eliud Kipchoge won the Berlin Marathon on Sunday (September 25), he was once again challenging the seemingly unsurmountable two-hour time barrier in the long-distance race. Kipchoge finished the 42-km distance on a flat Berlin course, clocking a time of 2:01:09.

The temperature was a cool 11 degrees Celsius in the city when he bettered his own world record of 2018. On that occasion, he had finished at 2:01:39. The great Ethiopian runner, Haile Gebrselassie, also set two world records in the same city, in 2007 and 2008, respectively. Incidentally, Berlin was also the location for the world’s fastest timing in the 100 metres by Usain Bolt.

Kipchoge, at 37, will be eyeing the Tokyo Olympics to cross the two-hour barrier if the conditions are as ideal as those in Berlin. He is most suited to, considering the way he has been shaving off the time to the finishing line, and also because he has been running faster in the first half, intending to tire out his rivals. Fellow Kenyan runner, Mark Korir, finished second five minutes behind him, showing how the Kipchoge tactic worked.

Looking at how he performs, it is natural to ask what material Kipchoge is made of. Coming from Kenya’s famous Rift Valley, which has produced most of the country’s long-distance world champions, he is a manic workhorse who practises every day on mud tracks near his home with fellow runners and eating homemade food, mostly yam.

Many believe black athletes are genetically suited for athletics, considering they dominate all track events, ranging from sprints to middle to long distances. The truth lies elsewhere. Children growing up in many parts of Africa lead highly physically active lives, most of them walking or running to school from a young age. We are talking about children running or walking four to 10 kilometres to school every day, which makes them extremely fit, with strong lungs and heart and a wiry physique, by the time they start serious running.

Also, in places like the Rift Valley, the altitude (2250 ft) helps the lungs grow stronger, especially in children who are always running around. That is why Kenyan and Ethiopian runners dominate the world.

The marathon, though it seems to lack glamour as an event compared to the sprints, has attracted some of the greatest athletes over the past 70 years or so. The time has been slashed by over 30 minutes during this period, posing the question: Are humans becoming fitter, or is it scientific training and protein aids? Marathon runners have little fat in their bodies and the build of birds. Their legs are as thin as our arms.

According to journalist Jere Longman, a marathon of 1.59:59 (which Kipchoge ran under controlled conditions, in the Nike-sponsored Sub 2 project in Italy two years ago) would require a searing pace of four minutes and 35 seconds per mile, seven seconds less than the current world record. It would require 85 to 90 per cent of a runner’s maximum aerobic capacity—twice that of an average man—and a sustained heart rate of about 160 to 170 beats per minute. (The typical resting rate is 60 to 100 beats per minute.) That is surely a sub-human feat, not for the faint-hearted to try.

The heart pounds at 160 beats a minute, and the body works overtime to power the heart, lungs, and legs. The burning and resynthesizing of adenosine triphosphate (ATP) create three times as much heat as it does energy. Lactic acid begins to singe the muscles.

Thus, the marathon is among the most fascinating of sporting events, though it has not got its due yet. In its primitive urge, its utter lack of supporting instruments (“just shoes and socks,” as a marathoner said), and its ability to give us pride in our own species, the marathon is unmatched. Endurance and human ambition are closely linked. To keep running and not to give up is life’s big lesson in every field. Marathon shows us that.

Also read: After two years’ wait, Mumbai Marathon to be held on January 15, 2023

Since 1908, the US, European nations, and Japan dominated the tracks, until Abebe Bikila of Ethiopia ran the marathon in a heart-stopping 2.15:16.2 in 1960. That is India’s top runner’s time today. From then on, we have seen the emergence of runners from Kenya, Ethiopia, and Morocco, who have changed the way we thought of ourselves as an animal species.

In 1996, the marathon took another leap, so to speak, towards the limits of possibilities. Khalid Khannouchi of Morocco recorded 2.5:42 at the Chicago marathon, 1999. In 2002, he bettered it to 2.5:38. After Kenya’s Paul Tergat touched 2.4:55, the thought of a two-hour marathon gripped the imagination of scientists, coaches, and runners worldwide. Kipchoge has now reached within touching distance of that time barrier.

When you run the marathon, you are alone, with lactic acid rushing through your veins and your system about to shut down. You need the courage, the desire, and the thought of what took you there on that beautiful road in a distant land where only a few stragglers trying to egg you on. When your lungs are about to burst, does glory matter? The truth is that it does — to many.

(Binoo John is a senior journalist. He has analysed sporting excellence in his latest book ‘Top Game: Winning, Losing and a new Understanding of Sport’)