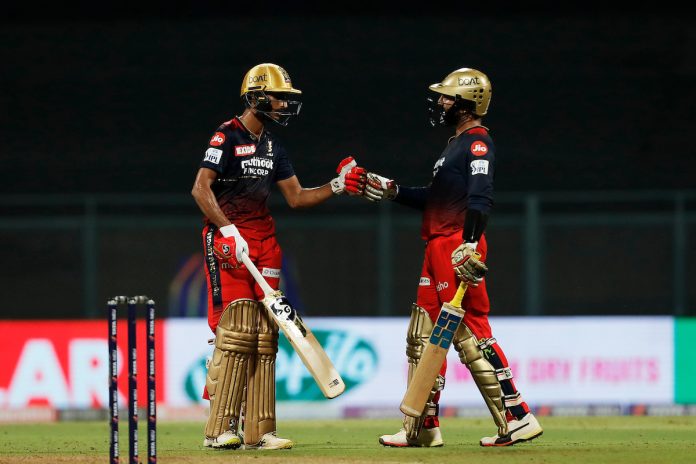 A sensational display of hitting from Dinesh Karthik and Shahbaz Ahmed helped RCB recover from a mini batting collapse and record a four-wicket win over Rajasthan Royals in the IPL on Tuesday.

Jos Buttler hammered half a dozen sixes in his unbeaten 70 off 47 balls, as Rajasthan Royals grafted their way to 169 for three, after RCB opted to bowl.

Losing four wickets in a space off 11 balls, RCB were in all sorts of trouble at 62 for four before Karthik (44 not out off 23 balls) and Ahmed (45 off 26) took the game away from the opposition with a 67-run partnership off just 33 balls.

Karthik eventually got the team home in 19.1 overs. It was RCB’s second win in three games, while it was the first loss of the season for the Royals after consecutive victories.

“DK (Karthik) is playing his best cricket. I think he needs to put his name back into international cricket,” said RCB skipper Faf du Plessis at the post-match presentation. “To pull it out of nowhere you need some good characters, and DK is as big a character as you can get. That calmness towards the end allows others to just come in,” said the former South Africa skipper.

At 55 for no loss in the seventh over, RCB were on course in the run chase before the game turned on its head, with the Royals taking a flurry of wickets.

The wily Yuzvendra Chahal (2/15), playing against a team for which he played for seven seasons, was largely responsible for the RCB collapse. He forced an error from du Plessis (29), who mistimed a leg break to be caught at long-on, before cleaning up left-hander David Willey (0) with a classical leg-break.

Chahal also effected the run out of Virat Kohli (5), after a brilliant take and throw from Royal’s skipper Sanju Samson. Trent Boult then getting rid of Sherfane Rutherford made it 87 for five, leaving RCB in a lot of trouble.

That was when Karthik, who has shown stellar form this season, came into the middle and brought back RCB into the contest with some sensational strokes, including a reverse sweep off Ravichandran Ashwin whose fourth over went for 21 runs.

Karthik did the bulk of the damage batting alongside Ahmed as they brought up their 50-run stand off just 21 balls.

Earlier, Buttler, fresh off a hundred in the previous game, had to work hard in his 47-ball knock on a slow Wankhede pitch. He had the support of Shimron Hetmyer (42 not out off 31) at the other end as the duo shared an unbeaten 83-run stand off 51 balls. Royals did not have the best of times in Powerplay, reaching 35 with the loss of opener Yashasvi Jaiswal (4).

Buttler and Devdutt Padikkal (37 off 29) started playing their strokes after the Powerplay and shared a 70-run stand to give the innings a move on.

After Harshal Patel sent Padikkal back to the dressing room, Samson (8) fell to a soft dismissal off Wanindu Hasaranga. It seemed the ball stopped on Samson, who offered a sitter straight back to Hasaranga, leaving the Royals at 86 for three in the 12th over.

In the slog overs, Royals found it tough to get the big hits, with RCB bowlers using the conditions effectively.

Buttler took a step back and let the hard-hitting Hetmyer go for the boundaries. However, the English wicketkeeper was back to his fluent best, hitting Mohammad Siraj for successive sixes in the 19th over to get to his half-century.

Akash Deep ruined his figures in the 20th over, when he was at the receiving end for a tight no ball call, before Buttler hammered him for couple of maximums over long on. Hetmyer finished the innings in style with a six over deep square leg, as the final over yielded 23 runs. Buttler did not hit a single four in his unbeaten effort.