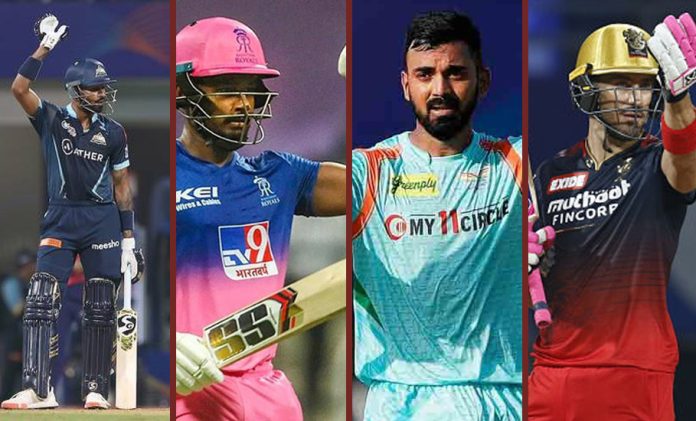 Before the start of IPL 2022, the odds of both Gujarat Titans and Lucknow Super Giants, the two newcomers to the big league, making the playoffs were extremely long. So was the possibility of Chennai Super Kings and Mumbai Indians, between them winners of nine of the 14 titles so far, ending up No. 9 and No. 10 respectively in the 10-team league. And yet here we are, reintroduced to the truism that fact is often stranger than fiction.

After an extended first phase involving 70 games, the Titans, the Super Giants, inaugural edition champions Rajasthan Royals and perennial bridesmaids Royal Challengers Bangalore are the last teams standing. Given the quality and consistency of all sides involved, there is no denying that this quartet deserves its place in the sun; in any case, that’s what the points table asserts and that, of course, is what matters.

The Titans have punched above their weight, of that there is little doubt. Especially when it comes to batting, they have unearthed heroes whenever required, primarily in the middle order where the bruising trio of David Miller, Rahul Tewatia and Rashid Khan has been electric. Hardik Pandya has impressed with his tactical nous and man-management skills, and they possess a pace attack to die for. The Gujarat franchise got off the blocks quickly, winning an unprecedented eight of its first nine matches, which served as insurance against a late meltdown. Despite losing three of their final five games, the Titans had done enough early on to finish on top of the league pile with 20 points, enough to earn themselves two shots at the May 29 final in Ahmedabad.

Also Read: Can Dhoni pull off another miracle for CSK next year?

Up against them in Tuesday’s Qualifier 1 in Kolkata are Sanju Samson’s Royals, man for man the most formidable of the survivors. There is class, quality and firepower in a versatile batting order with an equal mix of left- and right-handers, and even though Jos Buttler has cooled off in the second half, they boast the most destructive opener of the season. The Englishman smacked three 100s in his first seven hits but the last seven have yielded just 138 runs and his last three starts have all produced single-digit scores. While that must be a cause for concern, the Royals will be tempted to look at the glass as half-full. Despite Buttler going off the boil, the depth in their batting has bailed them out repeatedly; the right-hander is too good a player not to rediscover his touch, and what better time to return to prolificity than during the playoffs?

The Royals’ handling of R Ashwin, the batsman, has been exemplary. The ace off-spinner’s batting credentials have never been in doubt – he does have five Test hundreds – but it was clear in the past that he struggled to meet the demands of the 20-over game where there isn’t as much place for placement and timing as for power-hitting. Ashwin has quite clearly worked on his ball-striking skills. Where in the past he primarily targeted the area behind the keeper for his boundaries, he is now biffing the ball and long and deep into the straight field. Relishing his promotions up the batting order, including to No. 3, Ashwin not just brought up his maiden half-century but also cemented Rajasthan’s No. 2 position with a muscular unbeaten 40 in the final clash against Chennai.

Ashwin hasn’t picked up as many wickets as he would have liked, but he and Yuzvendra Chahal form inarguably the best spin duo of all teams and operate in the shadows of a gun pace attack expertly marshalled by Trent Boult and Prasidh Krishna. The Royals have a great chance to replicate their heroics of 2008 and go all the way in the ultimate tribute to their talismanic first captain, the late Shane Warne, because one senses that they haven’t yet played the perfect game, that there is still plenty of gas in the tank.

For large parts of the group phase, the Super Giants seemed set for a top-two finish until they stumbled at the business end. Not for the first time, KL Rahul has led his team’s challenge from the front. In his capacity as captain, he couldn’t inspire Punjab Kings to the playoffs in the last two seasons despite stacking up runs for fun. This time around, the runs have a greater import and meaning, though the Super Giants must think long and hard about how they can maximise the services of their crack Australian all-rounder, Marcus Stoinis.

A powerhouse if ever there is one, Stoinis has batted far too low down the order far too often to make a substantial contribution. Indeed, he has only faced 97 deliveries in ten matches and yet boasts a spectacular strike rate of 151.54; further, he has sent down a mere 42 deliveries. With so much batting reliance on Rahul, Quinton de Kock and Deepak Hooda, the Super Giants will do well to invest more heavily in Stoinis’ explosiveness and experience as they take on the Royal Challengers in the Eliminator which, as the name suggests, will usher the loser out of the competition.

The Bangalore outfit had to wait till the final game of the 70-match league phase to know its fate. Had Delhi Capitals put it past Mumbai, RCB would have endured familiar heartbreak. Instead, with Rishabh Pant’s men looking a gift horse in the mouth, RCB sneaked into the last four despite not having fired as a unit with any degree of consistency.

RCB have the worst batting and bowling Powerplay record of all teams. They have been the most expensive (economy of 8.05) and the slowest with the bat (run rate of 6.40) in the first six overs, the latter having much to do with former skipper Virat Kohli’s awful season that promises to have turned the corner with the match-winning knock against the Titans last week. Having stood steadfastly by Kohli when he was going through a horror patch, Faf du Plessis will be thrilled if this is the start of a purple patch for his predecessor. Were Kohli to hit his straps, RCB will be energised beyond belief, further emboldening an already storied bowling attack with Josh Hazlewood, Wanindu Hasaranga and Harshal Patel in the forefront.

From the same author

Can Thomas Cup coup be the 1983 moment for Indian badminton?

IPL: Where young talents sprout, mushroom and then explode