The controversial Copa America 2021 started in Brazil on Sunday (June 13), with the host country defeating Venezuela 3-0 in the opener. The Seleção played in front of an empty Mané Garrincha stadium in Brasilia as Neymar, Marquinhos and Barbosa scored in Brazil’s first win of the tournament.

In the second match, Colombia beat Ecuador 1-0 as Edwin Cardona scored a goal off a free kick from near the penalty box.

Originally planned to be a 12-membered league, the tournament was rescheduled by the South American Football Confederation (CONMEBOL) after Qatar and Australia withdrew in February because the dates clashed with other tournaments. CONMEBOL also had to shift the venue from Argentina and Colombia to Brazil just two weeks before the tournament began.

The withdrawal of Qatar and Australia leaves Argentina, Chile, Bolivia, Uruguay and Paraguay in Group A and Brazil, Ecuador, Venezuela, Peru and Colombia in Group B. The hosts, led by midfielder Casemiro, look forward to defend their 2019 title with help from key players like Neymar. Led by six-time Ballon d’Or winner Lionel Messi, Argentina would be eager to end its trophy-less run. Meanwhile, Uruguay will depend on its star players, Luiz Suarez and Cavani, to clinch the 16th Copa trophy.

Matches to look out for

The tournament has many high voltage clashes to look out for. On June 14 (Monday), Argentina takes on Chile, which would be an interesting match to watch. Another key encounter would be the one between Brazil and 2019 runner-ups Peru, on June 18. 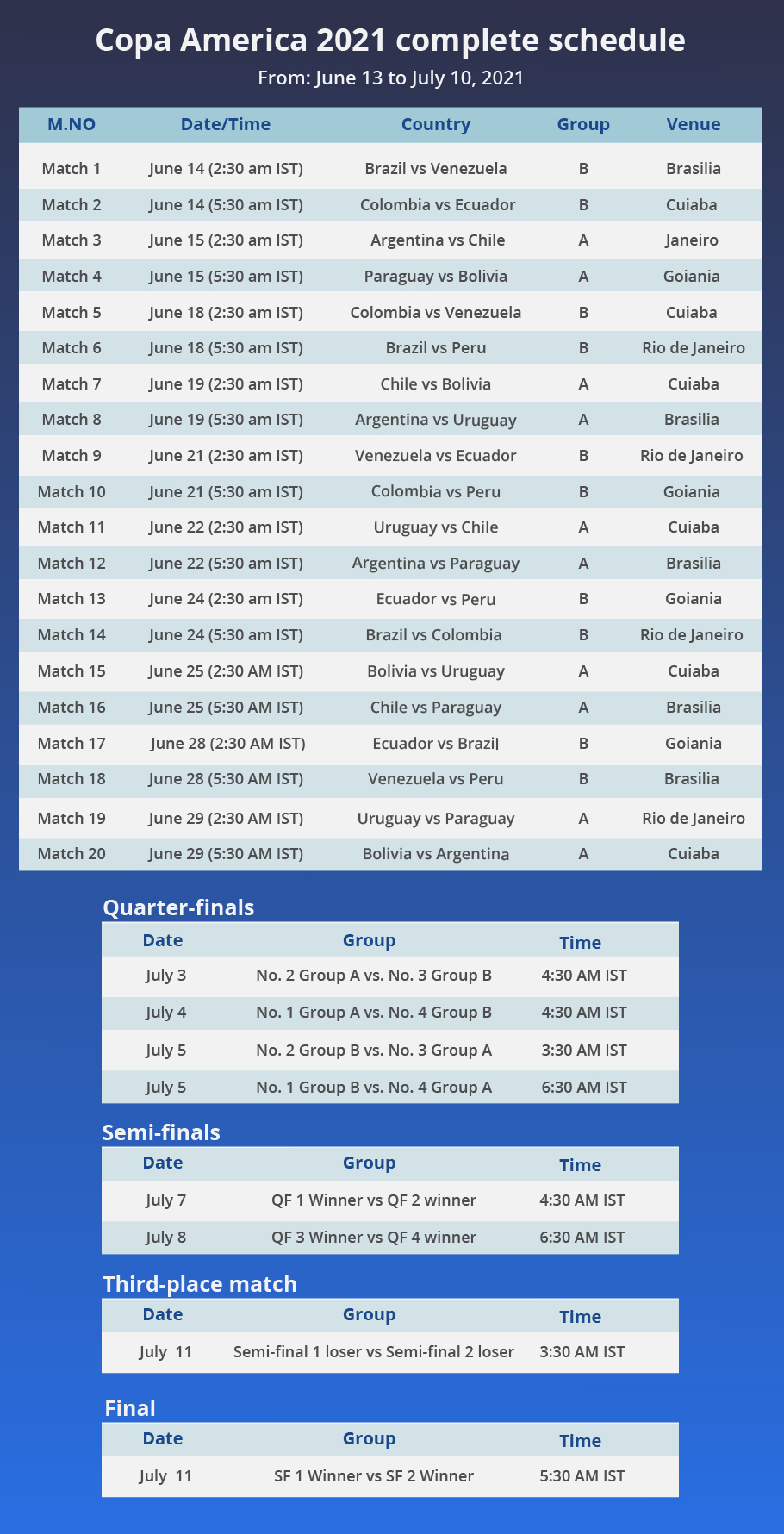 The tournament had to be shifted to Brazil from the original co-host countries, Argentina and Colombia, due to rising COVID-19 cases in Argentina and anti-government protests in Colombia. There were widespread protests against hosting the tournament during a pandemic. More than 4,87,000 deaths have been reported in Brazil due to COVID, and researchers have alerted that the second wave may hit the country by end of June. The Supreme Court of Brazil held an emergency meeting on June 10 to discuss several petitions to stop the tournament, but eventually gave a green signal.

As the opening match was being played in Mané Garrincha, protesters sat outside the stadium with placards demanding the cancellation of the tournament. Eight Venezuelan players, four coaches and three Bolivian players along with a technical staff have tested positive for COVID-19 so far. Many top players, including Messi, have expressed concerns regarding the continuation of the tournament. Even the Brazilian football team published a letter in social media, criticising the organizers for holding the tournament. Some key sponsors also withdrew for the same reason.