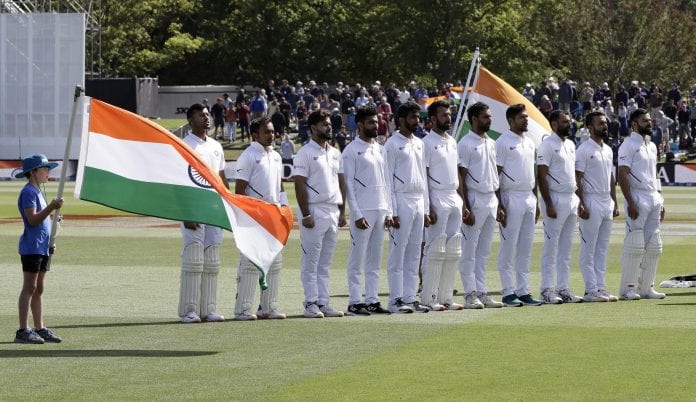 Indian players sing their national anthem ahead of play on Day 1 of the second Test against New Zealand at Hagley Oval in Christchurch last year. The two teams will meet in the inaugural World Test Championship final at The Ageas Bowl in Southampton, England, from June 18 to 22. | Photo: PTI

India remain the top Test side in the world, according to the ICC’s annual team rankings released on Thursday.

They head the table after gaining one rating point for an aggregate of 121, having accumulated 2914 points from 24 matches.

The Men in Blue are followed by their World Test Championship final opponents, New Zealand, with a rating of 120. The Kiwis have 2166 points from 18 Tests; they gained two rating points.

India’s 2-1 win over Australia and 3-1 win over England over the past year and New Zealand’s 2-0 series victories over the West Indies and Pakistan helped them top the list.

According to an ICC statement, the latest annual update eliminates results of 2017-18.

The latest update rates all matches played since May 2020 at 100 per cent and those of the previous two years at 50 per cent.

England (109 rating) have climbed a place to third, pushing down Australia (108) to fourth. England’s jump came after their 0-4 defeat to Australia in 2017-18 was dropped from the rankings.

Pakistan (94) have gained three points but remain at fifth spot, while West Indies (84), who beat Bangladesh 2-0 and drew 0-0 with Sri Lanka this year, have jumped two places to sixth, their best position since 2013.

South Africa (80) and Sri Lanka (78) have dropped a rung each to seventh and eighth positions, respectively, followed by Bangladesh (46), who have lost five points, and Zimbabwe (35), who gained eight points.

India and New Zealand will meet in the inaugural World Test Championship final at The Ageas Bowl in Southampton, England, from June 18 to 22.

– With inputs from PTI