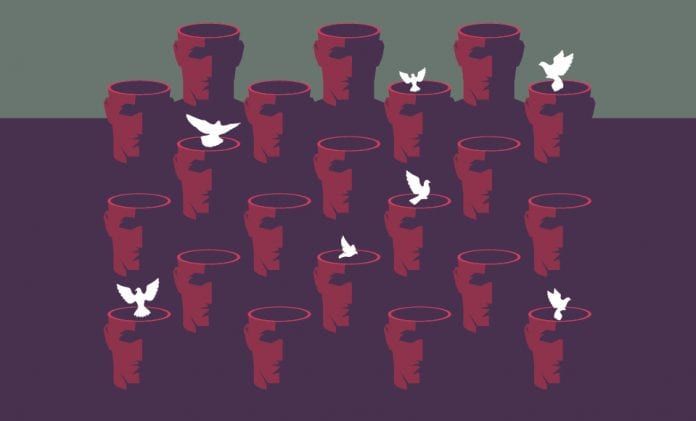 On a grey, rainy Saturday morning in Delhi, a few scattered thoughts.

January 26 is coming up, once again, when India gave itself a Constitution, for the first time in 1950, and became a country ruled by its public through elected representatives.

This is one of those days when patriotism rides high, and one must be careful with the words one chooses to examine what India as a republic means.

Already passions are high with the Narendra Modi government extinguishing  Amar Jawan Jyoti at India Gate and merging it with the flame at the National War Memorial. Though Amar Jyoti means  Eternal Flame, all eternities have a beginning.

Amar Jawan Jyoti was lit at India Gate’s arch on January 26, 1972, by the Indira Gandhi government to honour the soldiers who died in the 1971 war. The National War memorial is dedicated to all soldiers who lost their lives in post-Independence wars and was dedicated to the nation in February 2019.

The torch in memory of those who fought for the country is burning in a good place. Does it matter where exactly? No. Except history, critics point out, is being rewritten. But that is what history is. It tells the story of the winner. The pen is with the man who has the sword. The guys without the sword are busy looking for bread if they are not looking to come by a sword themselves.

What is the point of winning a war, if it does not go down as a good one? At the end of his numerous wars, which at one time made him the emperor of almost all Europe in the first decade of the 19th century, when he was confined—after losing the Battle of Waterloo against Duke Wellington—to a house on a desolate rocky island, St Helena in the South Atlantic, Napoleon Bonaparte, unsure if his feats were going to be read right, began writing/dictating his own version of the battles, though beginning with the Russian invasion in 1812, all his wars were catastrophic for the French.

Also read: Why India should support Russia in its standoff with the West over Ukraine

Back to the Republic that soldiers die for and the citizens debate over with war-like frenzy: why do Indians flee their homeland? Because this is the kind of  Republic that we have awarded ourselves. Ah, and how desperately we want to get out of it.

While the Amar Jyoti flame debate is raging, some tens of thousands of kilometres away across North Dakota, close to the Canadian border from the US, an Indian family of four, father, mother, teenage son, and a baby girl have been walking for close to 11 hours in temperatures below-30 C. They died of the cold, just 10 meters from the Canadian border.

Perhaps they thought the blizzard gave them the cover to slip through the border, and become Canadians. Which is another way of saying they were desperate for a better life than the one that their Indian passport would guarantee them. I imagine their last hours of fear and despair, and cannot find an explanation for what India — in my experience to be Indian is to be in a state of perpetual anxiety— can do to its own people. It’s an idea that can kill.

Last year, in August, when US president Joe Biden pulled back his troops from Afghanistan, thousands of natives wanted to get out of the Taliban regime that replaced the West-backed government.

In their desperation, some hugged the wings of the planes that shrugged them off as they took off from the country. At least two fell to their death. At the time, there was a general gasp of pity and terror in India’s urban circles— the bunch that is the quickest to convince themselves that they are the conscience of the humanity—at the despair of those Afghans who wanted to escape their country no matter what the cost. As ever, a  feeling of superiority was implicit in the pity of the elite.

Let me take you back some quarter of a century ago when some of you may not have been born. An incident that has never ceased to engage my grim fascination. In October 1996, two brothers in their early 20s, Pardeep Sani and Gopal Saini from Punjab, smuggled themselves into the wheelbase of a plane bound for London from Delhi.

The flight lasted over 9 hours, in temperatures around-60 C, at a speed of over 750 kilometres per hour at an altitude of around 40,000 feet. The younger Saini, Gopal, froze to death after a few hours. When the plane opened its wheel bay again over Richmond, near Heathrow, he dropped down dead. Pardeep was luckier. He walked out of the wheel bay in a daze and was arrested. He had no idea who he was. They admitted him to health care.

Then the immigration authorities swung in. The case went on for 18 years before the British government gave Pardeep a UK  passport, in 2014. Pardeep now works as a driver at the Heathrow airport. He is married and has two children.  He never talks about his voyage. It is a safe bet, too, that Pradeep has never made a trip to India since then. Who wants to come back to the country that drove you out of it? The Republic that disowned you as much as you disowned the Republic?

Annually, 2.5 million Indians migrate to the West. And at least a few of them do so, staking their lives on the hope for a better life in an alien country, which for all its faults, must appear to them guided by a fairer ethic.

The Indian family that tried to cross into Canada must have shared that belief. The Saini brothers and the 2.5 million that annually migrate and possibly double that number trying to migrate, too,  raise a question: what is the nature of the Republic that we are lighting eternal flames in gratitude to?

Last week, in the context of the Republic Day celebrations, Prime Minister  Narendra Modi said that for the next 25 years we have a fight on our hands: the fight to make India a good place for its people. Well.

In roughly the same time as the 1940s when India became independent, China has grown to be the No 1 economy in the world. Japan, atom-bombed twice, is one of the wealthiest nations. Russia, after repeated wars and whole-scale dismantling, is stronger and richer than before. Germany has risen to be a welfare paradise from the utter ruins of the First and Second World Wars.

But our Republic is still in rags and tatters and the Ganges and the Yamuna still white with the foam of the sulfates of a development model that distributes poverty and grime across the country.

Surely, the problem lies not with the governments that the Republic so dutifully elects every five years. They are after all the best representatives of ourselves that we can come up with. The problem is with the public; us; the race. How many Canadians, Britishers, or Americans will smuggle themselves into the wheel bay of a plane so they could end up in Mumbai for a better life? Not one. Why? Because this is a republic lit in eternal hellfires.

(CP Surendran’s novel, One Love And Many Lives of Osip B, is available on Amazon, and at all leading bookstores).

Also read, from the same author

The ‘De-coupling’ of free speech from political correctness

The new BJP is the old Congress — with teeth and claw, plus data

‘Jai Bhim’ and the cinema of emotional blackmail