LG Polymers, which gave ‘capital punishment’ to the freshly minted ‘capital of Andhra Pradesh,’ Visakhapatnam, has no valid environmental clearance — either for its establishment or for commencing and enhancing the production of hazardous chemicals. It only has the ‘consent’ of the Andhra Pradesh State Pollution Control Board (APSPCB).

This fact is revealed in a document called ‘Undertaking Affidavit dated 9.5.2019’ filed by LG Polymers’ Director (Operations) P. Chandra Mohan Rao. The ‘affidavit’ agreed that it had expanded the production at the plant ‘beyond the limit of environmental clearance or changed the product mix without obtaining prior environmental clearance as mandated under the EIA notification, 2006.’

In a letter on May 10, 2019 to the Chairman, State-level Environment Impact Assessment Authority (SEIAA), Hyderabad, Mohan Rao filed a request for environmental clearance along with the ‘undertaking affidavit.’ Mohan Rao was proposing expansion of the petrochemical project located at the Venkatapuram- Vepagunta area of Visakhapatnam district, which was submitted on 12.4.2018. In response to this, the SEIAA had raised a query and sought an affidavit in standard format.

Mohan Rao had also paid ₹4.5 lakh through a DD in favour of the Member Secretary, SEIAA. The undertaking included a promise that it would not repeat any violation in future.

Production of hazardous chemicals is regulated by the Manufacture, Storage and Import of Hazardous Chemical Rules 1989, according to which styrene is classified as a ‘hazardous and toxic chemical.’ This being ‘A category’ the competent authority to accord ­­­­­­­Environmental Clearance is the Union Ministry for Environment. LG Polymers admitted that hazardous chemicals would be used for the manufacture of polystyrene and expandable polystyrene, but said that it would not have ‘any significant impact’ on the heath of vulnerable people such as patients, children, and the elderly.

The affidavit says: “All the hazardous materials will be stored in MS (mild steel) drums, in a covered shed and no contamination of soil is expected. Same philosophy will be followed after expansion,” the application stated. It had also said that all the inbuilt safety precautions would be taken during the expansion, and that there ‘will not be any damage’ to environment or human health.”

Mohan Rao claimed that he was aware of the fact that he had to follow all rules and bylaws made there under from time to time, relating to operation of the unit. He claims that they got consent for establishment for this unit from APPCB on 16.11.2001, and consent for operation for manufacture of polystyrene (233.3 tonnes per day) and expandable polystyrene (45 tonnes/day), on 8.5.2002 from APPCB. Similarly, the APPCB gave seven consents from March 2004 to June 2018.

“As on this date, our industry does not have a valid EC substantiating the produced quantity, issued by the competent authority, for continuing operations. However, we are continuing our plant operations with valid consent for operation from the SPCB AP. Further, I submit that the conditions specified in the CFE/CFO have been fulfilled to the satisfaction of APPCEB,” the affidavit said.

Related news | Vizag styrene gas leak and after: The misery continues for some people

In August, 2017, the Supreme Court directed payment of 100% penalty for illegal operations with reference to the relevant statutes like Environment (Protection) Act 1986, Water Prevention and Control of Pollution Act 1974, and the Prevention and Control of Pollution) Act 1981, the Forest (Conversation) Act 1980, and the Mines and Minerals (Development & Regulation) Act, 1957. Agreeing to this condition, the LG Polymers filed the affidavit along with an application seeking clearance to SEIAA, which forwarded it to the Union Ministry of Environment recommending clearance.

All these statutes and regulations are post-Bhopal tragedy legislations and are expected to be strictly implemented to prevent Bhopal kind of calamities. The LG Polymers leak created a mini-Bhopal crisis in Visakhapatanam and it is an example of the state’s negligent attitude in implementing the laws.

The managers of the LG Polymers have been charged under IPC Sections 278, 284, 285, and 337. They should examine why a criminal case is not booked under first part of Section 304 for culpable homicide not amounting to murder.

In 1984, when Bhopal tragedy occurred, there is no environmental law and no international liability principles. India thought it has learnt to make laws and understood the lessons from this tragedy. New chemical emergency preparedness was mandated for companies to develop process safety and risk management. A duty is imposed on managements to report their possible leaks and crisis management systems to government. 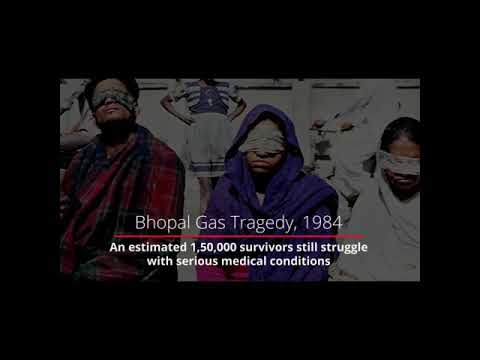 Time has come to implement the principle of Absolute Liability laid down by the Supreme Court after the Bhopal gas tragedy and codified by Parliament in the form of ‘Public Liability Insurance Act, 1991,’ under which the victims are entitled to an immediate compensation of ₹25,000 even without raising questions of proof of liability of culprits in the factory management.

It is the duty of such factories, which deal with poisonous gases, to educate those living in the vicinity of steps to be taken in the event of an accident. There should be proper advance warning systems. In the event of a leak, there should be announcements on the public address system and the people should be advised to move away.

Another major rule laid down was that the measure of compensation must correlate to the magnitude and capacity of the enterprise. The large and more prosperous the enterprise, greater must be the compensation.

In 1991, the Public Liability Insurance Act (PLIA) was brought into force to provide interim compensation to the victims in the event of an industrial disaster without having to prove neglect or wrongful act of any person. PLIA requires industry owners to obtain insurance policies which shall not be less than the paid-up capital of the unit and limited to ₹50 crore.

Though the Pollution Control Boards and Green Tribunal are functional, there are apprehensions that mini-Bhopals could happen. This is because, like many laws, the storage rules or even hazardous waste rules are not followed meticulously.

It is surprising that the APSPCB has granted its consent around nine times, through nine letters, knowing fully well that LG Polymers had no valid Environmental Clearance of any kind from the beginning.

The AP government has to disclose all the documents collected by the APSPCB and explain whether the requisite conditions had been fulfilled by LG Polymers for securing consent to ‘expand’ the production from 415 to 655 tonnes per day using hazardous chemicals at additional cost of ₹168 crore. The company is allowed to do it till December 2021. How could the company get this consent when it did not obtain clearance for the petrochemical-based processing.

It is the duty of the AP government to explain how it was convinced that this was an essential industry that needed to function even during the lockdown days. Also, it is to be made clear whether the inspector of factories had examined the conditions of this factory before permitting it to establish and expand?