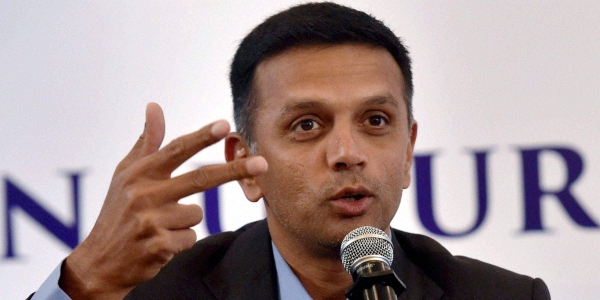 Dravid needs to offer no further evidence of his coaching credentials

It is possible, just possible, that Sunday (July 18) could herald the beginning of the next chapter of Rahul Dravid’s storied cricketing journey.

The former India captain has found it difficult to stay away from the sport since his retirement from competitive cricket in 2013. The following year, he was involved in a mentoring role with the national team ahead of their five-Test series in England and, in 2015, stormed everyone’s imagination further by agreeing to come on board as the coach of India ‘A’ and Under-19 teams.

During his four years with the two developmental squads, Dravid oversaw the blossoming of several exceptional youngsters, many of whom have broken into and/or established themselves as crucial members of Indian squads in various formats. It was believed that taking charge of the senior side at some stage in the future would be a natural progression.

In 2019, Dravid dipped his toes in administrative waters after being named Head of Cricket at the National Cricket Academy, a position he holds to date. One is not sure if, despite the onerous responsibility of charting roadmaps for age-group and senior cricket for both the men’s and women’s set-ups, it’s a role that decidedly enthuses him, because nothing seemed to thrill him more than getting his hands dirty, so to say, on the cricket field.

Also read: Djokovic magic: Sky is the limit as his final tally may remain unsurpassed

Sunday will mark the one-time fulcrum of Indian batting’s maiden foray into senior coaching at the international level. With the Test squad in England for a five-match showdown against the hosts from August 4, Dravid will reprise Ravi Shastri’s role in the second Indian team – and not second-string, as pesky former Sri Lankan skipper Arjuna Ranatunga termed it – during the white-ball tour of the Emerald Isle which encompasses three One-Day Internationals and as many Twenty20 Internationals.

On the face of it, it’s a one-off assignment necessitated by the extraordinary times we live in, where bio-secure bubbles and mandatory quarantines have become as much a part of the sporting lexicon as equipment, training and match-play. That said, it’s also possible that this is a foretaste of things to come, with Dravid being appointed head coach of the senior team on a permanent basis.

While that might appear in the realms of speculation for now, what is a reality is that Shastri’s second term as head coach will end at the conclusion of the Twenty20 World Cup in the UAE this November. Whether Shastri is desirous of continuing his association with the Indian team – he has been actively involved with them, as team director and head coach, for six of the last seven years – is open to question. Even if he is, it’s not fanciful to imagine that the results of the next four months could have a significant say in the final analysis. After all, despite the two rip-roaring Test series wins in Australia and a place in the final of the inaugural World Test Championship, India are still looking for their first global silverware since 2013.

Perhaps the biggest question is whether Dravid believes the time is ripe for him to upgrade the status in his CV from India U-19 and ‘A’ coach to plain and simple India head coach. His contemporaries believe so, but Dravid has seldom pandered to popular opinion. And since he believes in playing his cards close to his chest, only very few are privy to what’s going on in that razor-sharp mind that made him one of India’s most successful but least celebrated skippers.

It might be deemed sacrilegious to suggest that the Sri Lanka tour is Dravid’s audition for the head coach’s position. Dravid needs to offer no further evidence of his coaching credentials. The work he has put in in the ‘lesser’ levels speaks for itself. He has been more than just a cricket coach, though. Dravid has drawn on his immense experience and innate wisdom to offer valuable life lessons that have been lapped up gleefully by starry-eyed youngsters justified in believing they had hit the jackpot.

In Dravid’s favour, if that is even needed, is the fact that many in this white-ball team, like in the Test side, have been under his tutelage at one time or the other. He has played at the franchise level, if not internationally, with a significant portion of the squad. Trust and comfort in the exchanges between the coach and his wards are evident and mutual, even though this will be Dravid’s first tilt at the windmills as coach in the more stressful environs of international cricket.

With India ‘A’ and India Under-19, Dravid’s avowed focus was on nurturing a healthy and productive feeder system to the national team. Yes, results were important, but Dravid took pains to point out at every opportunity that after a while, no one remembered who an Under-19 World Cup winner was, or who set the world afire in ‘A’ cricket. Like most things Dravid, this too was steeped in inarguable logic.

The legend isn’t unaware that on this tour, it is not so much about giving all his 20 charges a run-out as about returning with the right outcomes, especially against a Sri Lankan side just coming off wiping the floor in England and further handicapped by the unavailability of several significant players through injury and indiscipline. This would appear an extension of the ‘A’ concept with only the status of the matches assuming a more significant hue, but Dravid has been around long enough to know not to take anything for granted, to be mindful of the invisible banana skins that might wickedly lie in wait, especially when, sitting on the sidelines, he has no control over the proceedings.

Dravid has already given back more to Indian cricket than any of his peers, especially by training his focus beyond the senior side. Those who administer Indian cricket, among them his former captain Sourav Ganguly, will be desperately hoping that the Dravid cup of sagacity continues to keep giving for the foreseeable future.