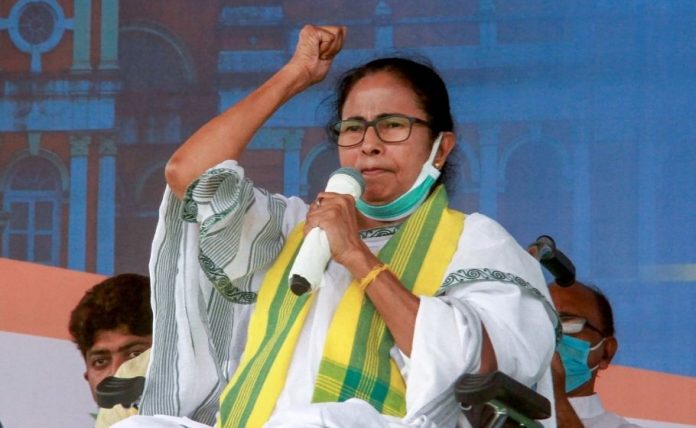 This year’s political landscape is almost entirely dominated by men in India. The exception is Mamata Banerjee. Neither married into a powerful political family nor born in one, Banerjee made her way up armed with inexhaustible energy, especially for a political fight, determination and a capacity to take risks that sent her career through a series of ups and downs.

Mamata Banerjee has written the rules of participation and practice in politics to suit her purpose. To begin with, instead of moderating her appetite for a fight, she has remained a street fighter. Instead of modulating her style and language to conform to the style, language and codes adopted in New Delhi, Banerjee has been faithful to her origins, as the daughter of an ordinary, educated middle class Bengali family. Her language remains colloquial however objectionable it may be for her opponents. She has never stepped back from a fight, nor conceded ground politically.

Up against Mamata Banerjee, the Bharatiya Janata Party as the challenger in the West Bengal assembly elections routinely responds with shudders of disapproval over her language that it insists is disrespectful and not in consonance with Bengali culture. “We will tie a rope around Modi and parade him on the streets,” is what she said in 2009. More recently she described the Narendra Modi-Amit Shah duo as “Hondol Kutkut and Kimbhut Kimakar,” that translates as “Obese, bulging, creepy hulk” and “grotesque monster, oddly shaped strange apparition;” she threatened to slap Modi and jeered at BJP national chief as Nadda, Chadda, Hadda, Gadda. Over the years she has used similarly colourful descriptions about every political party and almost every political opponent, jeering, mocking and taunting to provoke a reaction.

Her weaponisation of words is very quintessential to her style. It is perhaps her defence as well as the only means she has to go on the offensive against the underlying and overarching armour in which her opponents, always men, are protected, by patriarchy, which is a construct of culture and of civilisation itself. Her usual assessments range from the strident shrew, the coarse female, unladylike, shrill and aggressive, sharp tongued and quarrelsome, all of which are female “types” that set a woman apart from the conventional stereotype of a woman as “ever soft… gentle and low, an excellent thing in woman.”

The point to note is that had she been ever soft, gentle and low, she would not have survived in politics. The idea of women as leaders is so alien to deep-rooted and all-pervasive patriarchy that for a woman, without a lineage, to arrive in politics and, that too, at a dizzyingly fast speed would have been impossible. Underlying the idea of Mamata Banerjee’s success and achievement as a politician is the trope of the Jezebel and it pops up in various ways in the clashes between her and the opposition. It reflects the anxiety of patriarchy about its unquestionable dominance and the almost instinctive reaction to turn the uncontrollable female into a doubtful character, a Jezebel of sorts.

As the only woman in politics to have founded her own party, the Trinamool Congress, in 1998, Mamata Banerjee is exceptional. Former President Pranab Mukherjee wrote about her that her success was “the outcome of her own struggles,” even after he admitted to feeling “humiliated and insulted” by her volte face over her decision to demand an election for the position of state Congress president in 1977. In his memoir he wrote: “She has an aura about her which is difficult to explain but impossible to ignore”. As someone with enormous influence and clout, who knew her well and in her career, Mukherjee’s insight is significant.

After two terms as chief minister of West Bengal from 2011, when she decimated the Communist Party of India Marxist-led Left Front government of 34 uninterrupted years in power in the state, she is now fighting to retain power for the third time. From 1984, Mamata Banerjee has been a national-level leader, when she was elected as a Member of Parliament for the first time after defeating CPI-M leader Somnath Chatterjee who was later Speaker of the Lok Sabha. She was also president of the All India Youth Congress. Elected to the Lok Sabha seven times, Mamata Banerjee was India’s first woman as Union minister for railways, twice, Union minister for coal and mines, Union minister of state for human resources development, department of youth affairs and, women and child development.

The list of her successes makes her an exceptional political leader, regardless of gender; and the fact that she had worked to establish her calibre as a politician with unusual promise is what separates her from the rest. Her critics, and there are legions in West Bengal and in politics, and her admirers acknowledge that her career has been extraordinary, but with each iteration there is a tag line which keeps changing depending on what she has done or said or fought over or condoned.

The Trinamool Congress as it is today has one leader, Mamata Banerjee. She appears to run her party in autocratic style, making decisions that are not arrived at through an open process of consultation. Her likes and dislikes have fomented factions, divided the party and nurtured leaders who have now defected to the BJP, delivering shocks to the organisation. To counter the destabilisation that was inevitable with the departure of leaders she groomed like Suvendu Adhikari, Mamata Banerjee decided to contest from his home seat, Nandigram. It is typical of her that she announced her decision in a public meeting, without consulting the leadership.

“She is politically intelligent,” said a distinguished feminist scholar, who requested not to be named, about Mamata Banerjee. She cannot be underestimated is another view. The immediate reaction to her injury or accident of March 10, when she looked visibly distressed because of the pain, produced knee-jerk reactions from the BJP, the Congress and the Left. Collectively the entirely male leadership of these parties described the distress and the hospitalisation as theatrics, questioned the pain and the injury and crudely suggested that she ought to wear Bermudas to show her leg, because hoisting the sari above the ankle is so inappropriate and not a part of Bengali culture.

Also read: Injured Mamata back on her feet, sings national anthem as campaigning ends in Nandigram

The obviously innuendo-laden comments from West Bengal BJP president Dilip Ghosh triggered reactions among a lot of women. Belatedly the Trinamool Congress officially responded to the harassment of its leader by targeting Narendra Modi’s jeering reference to ‘Didi, o Didi’ as inappropriate behaviour. It points to the power of patriarchy that the Trinamool Congress waited almost a month to respond to the harassment directed against Mamata Banerjee, the woman – “faked injury,” “theatrics,” “sympathy seeking,” “attention grabbing” – all of which is par for the course when women complain about pain, as global research has revealed, and which affects the ways in which health care services respond to women in emergency rooms and consultations by medical experts.

The distinctive focus of the Mamata Banerjee government on unrolling development strategies targeting women and the girl child will remain her legacy in West Bengal, regardless of whether she wins in 2021 or loses. The strategy is textbook women’s development policies that change the dynamics of the status of the woman and the girl child within the home, in the community and over time. These policies — Kanyashree, Rupashree, Sabuj Sathi and Sasthya Sathi — entitle women to make choices that have long-term impact on their own lives, in their families and within the community.

Her promise to revive big industry in West Bengal may not have worked. Her promise to create jobs may not have worked either. India’s job growth touched a 45-year low in 2019, indicating that Mamata Banerjee cannot be the only chief minister to fail when others have failed too, including the Modi government. Any successor government will have to decide how to take forward her women-focused policies or if these policies are allowed to die out, the political consequences of tampering with Mamata Banerjee’s legacy.

As a one woman army, Mamata Banerjee is more successful than a cohort of men in politics. Giving her credit is where the problem begins.

Shikha Mukerjee is a political commentator for print, digital and television. She was political editor of The Times of India in Kolkata.

4:20 PM, 1 February, 2023 0
Modi-Sitharaman’s first ‘Amrit-kaal’ budget and the last one before the 2024 General Elections has no big surprises, but several messages aimed at various sections of the society