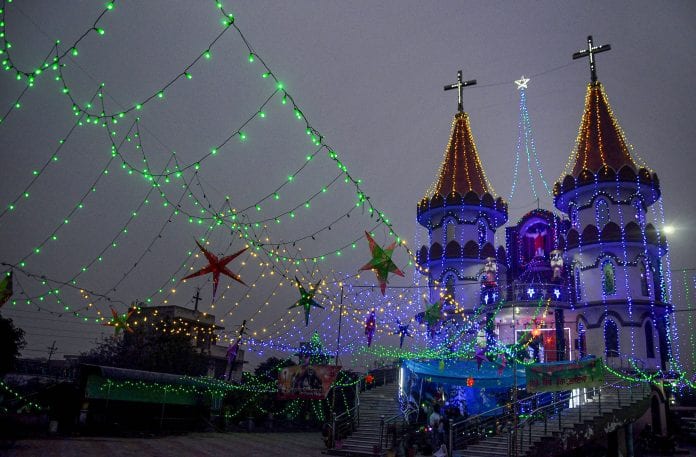 "There is no justification in attributing anti-social behaviour to a religion because the name of the person engaged in anti-social activities is associated with that particular religion or they justify their wrongdoing in the name of religion,” said a joint statement issued by CSI Bishop Sabu Koshy Cherian and Thazhathangadi Juma Masjid Imam Shamsudheen Ilavupalam. Pic: PTI

When you look at Kerala from the broad Indian perspective, this land comes across as God’s own, the sanctum sanctorum of religious and cultural harmony. Indeed, there is a long history of Education, Enlightenment and Socialism. But behind the veils of progressivism, Kerala has always concealed a ghastly reality of hatred among faiths. Sometimes that malice comes out and people from all walks of life would pretend to be shocked.

The latest is the Pala Bishop’s ‘Narcotic Jihad’ statement. While addressing a church ceremony in Kuravilangad (Kottayam district), Fr. Mar Joseph Kallarangatt, the Bishop of Pala Diocese of the Syro-Malabar Church, said: “Wherever arms are not taken out, narcotic drugs are used and Catholic girls turn victims. Some groups are functioning in the state to help them. To understand this, one needs to analyse how women from other religions landed in the Islamic State camps.’’

The Bishop was referring to the news about the visit of 21 people, including five converts to Islam, from north Kerala to Afghanistan in 2016, to reportedly join the Islamic State. He added: “There is an increase in the use of drugs among the youth. People from other religions are being targeted deliberately by a particular group. There are people who are helping them as well. Parents and others should be careful about this.” He also criticised the government and authorities for ignoring such activities.

Even the Centre and courts ruled out that ‘Love Jihad’ ever happened in India. It is now just a term often used by right-wing groups to describe unions between Muslim men and women from other religions. But Church authorities and many senior members of the Christian conglomeration, for long, have used this term to vilify the Muslim faith. One of the oldest newspapers of Kerala, run by Catholic leaders, started a discussion arguing that the state’s fund for the ‘minority ministry’ is used only for Muslim institutions and welfare. Christians are being ignored by politicians since Muslims are a known vote bank, the writers argued.

The immediate reaction came from the BJP, which has been luring the Christian upper class for years to enter Kerala’s power game, played between the CPI(M)-led LDF and the Congress-led UDF. In fact, the Hindutva forces have been trying to enter the Kerala mainstream politics since the 1950s, but Kerala’s demography restricted their presence. Muslims and Christians have always had a significant presence in the state. Like the upper-class Hindus, they always had powerful positions in Kerala’s politics, culture and social dynamics. In the 1930s and 1940s, the Hindu Mahasabha had a significant say in Travancore Hindu dynasty. But after Independence, they lost it since the game was always between the Congress and the Communists. Unlike in other parts of India, Babri Masjid demolition drive or Vajpayee’s India Shining or Modi’s emergence had no effect here.

In the 1950s, the BJP tried to appeal to the Ezhava community of Kerala through Sree Narayana Dharma Paripalana Yogam (SNDP). It was the time of legendary leaders like Sahodaran Ayyappan and C Kesavan. The BJP couldn’t get near that secular fort though. But they were persistent. In the last decade, Hindutva leaders managed to get SNDP Chief Vellappally Natesan’s son Tushar Vellappally to form a party and get into an alliance with the BJP. But that also could not make any impact on Kerala’s electoral politics.

In 2018, a golden opportunity opened up for BJP. The vexed issue of women’s entry in the Sabarimala temple became a hot subject and the RSS, as well as the BJP, took a U-turn to oppose the Supreme Court order to allow young women to enter Sabarimala. The state government favoured the SC order. It was a moment of truth and Kerala’s horrific face of misogyny, patriarchy and religious obduracy lay bare for everyone to see. But BJP could not reap the benefit. In subsequent elections, the BJP’s vote share went down consistently.

The Christian animosity towards Muslim Community did surface at this juncture. Historically, Christianity has played a major role in the progress of the state. The missionary educational institutions took a lead in making this progress happen. Even today, churches are considered public institutions in several villages. A lot of cultural and social institutions are run by the church. In Malayalam, the synonym for school is ‘Pallikkoodam’ (Palli is the Malayalam word for Church).  But there have always been some fundamentalist groups who spread hatred towards other faiths as an expression of love and commitment to their own faith.

The emergence of BJP at the Centre as absolute power and the downfall of the Congress together proved a turning point for many Christian institutions in Kerala. Most of them have been loathing Communists since the infamous ‘Vimochana Samaram’ (Liberation Struggle, 1958-’59) to overthrow the first democratically elected government of United Kerala. The Church and Communists are not always at loggerheads, as they were earlier, but still have problem with each other as institutions.

In two recent incidents, the Left machinery clearly worked against the Church. One was the 2018 case against former Jalandhar Bishop Franco Mulakkal, who is the first bishop in the Indian Catholic history to be arrested for rape. He was charged for raping a nun. The second was the case against Father Robin Vadakkumchery, who was booked under Protection of Children from Sexual Offences Act (POCSO) for allegedly raping and impregnating a 16-year-old girl. In both cases, the Catholic institution stood behind the accused. But there was a huge outcry against the church’s misogynistic approach in Kerala and even some of the nuns and believers hit the street against church authorities.

This is where BJP comes into the picture. They are in power at the Centre and are capable of protecting a few of the Church’s interests. In fact, some BJP leaders have a very cordial relationship with the Kerala Church. Prime Minister Narendra Modi himself showed interest in stepping into the decades-old Orthodox- Jacobite feud. The Congress is nowhere in the scene and the Communists still are against the institution. There were murmurs of ‘love jihad’ and minority funding. Some Church leaders felt it was the perfect time to start discussions with the BJP, which was keen to establish itself in Kerala.

Pala Bishop’s ‘narcotic jihad’ statement did hit the nerves, as expected. The BJP and right-wing leaders stood behind Joseph Kallarangatt, taking up the issues of ‘Islamic terrorism’. They used the opportunity to spread their virulent ideology.

BJP Rajya Sabha MP and actor Suresh Gopi visited Pala Bishop and lent his support. State Party president K Surendran’s press conference was on expected lines. As usual, Surendran was very vocal about terrorism and ‘love jihad’. Leaders from different factions of Kerala Congress, predominantly a Christian Party, hurried towards Bishop’s palace, eager to support him. While Congress leaders, with the initiative of opposition leader VD Satheesan, stepped in to settle the issue, state minister and CPI (M) leader VN Vasavan visited the bishop and made it clear that the State government will not desert the bishop in the face of the controversy.

While other political leaderships were irresolute to take a stand, a lot of Christian leaders and priests came together to uphold secularism and harmony. Metropolitan of Niranam Diocese of Malankara Jacobite Syriac Orthodox Church, Bishop Geevarghese Mor Coorilos wrote on Facebook: ‘Pulpits should not be misused for polemic’. In his interview to ‘The Quint’, Bishop Coorilos asked the Pala Bishop to withdraw the statement. Chaldean Syrian Church chief Mar Aprem told the media that nothing can break the communal harmony of Kerala. While Bishop was getting support and praise from within the community, a bunch of nuns dared to stage a walkout in protest of his hate speech. One of them, Sister Anupama, said: “This is not for the first time the priest is delivering anti-Muslim speeches in churches. On Sunday, it was related to the latest remarks of Bishop Kallarangatt. Christ has taught us to love everyone and not spread communalism.”

As Sister Anupama said, this is not for the first time minor animosities have been debated in favour of larger agendas. But the bigger question is that can this controversy end up benefitting the BJP by spreading vileness in society? The answer to the question lies in the amount of acceptance to the joint press conference of CSI Bishop Sabu Koshy Cherian and Thazhathangadi Juma Masjid Imam Shamsudheen Ilavupalam. As leaders of their individual communities, the two religious leaders sat together and talked about the social evils without directly touching the hate speech. “There is no doubt that we must counter all obsolescence that plagues our society. It is essential that all social evils are opposed and public opinion must be formed against them. But the approach of communalising social obsolescence is not at all good for society. It is illogical to blame a religion for the wrongdoings of a few individuals in that religion. There is no justification in attributing anti-social behaviour to religion because the name of the person engaged in anti-social activities is associated with that particular religion or they justify their wrongdoing in the name of religion,” the joint statement said.

The 13th verse of 1 Corinthian’s is relevant in this context:  ‘Love does not delight in evil but rejoices with the truth.  It always protects, always trusts, always hopes, always perseveres.’

(The writer is a senior journalist based in Kerala)