Israeli filmmaker Nadav Lapid’s criticism of the official mascot Kashmir Files came at the most inopportune moment, during the closing ceremony at the International Film Festival of India (IFFI). Inopportune because that was the high point of the prestigious event when a slew of  government officials and other establishment figures were present in the audience.

If ever there was one section, more shocked than the rest, among the people assembled there that must have been the organisers led by the Information and Broadcasting Minister Anurag Thakur. For, who would have thought, of all people, an Israeli invitee would turn and bluntly criticise the movie  that has been openly promoted by the ruling BJP government of Prime Minister Narendra Modi.

Israel today is among India’s closest allies. Besides economic deals, its biggest customer of weaponry is the Indian military which buys arms worth a massive $4 billion. Along with the United States, the three form a strategic axis in today’s geopolitics. No wonder the Israeli Ambassador and the Consul-General in Mumbai moved fast to pre-empt any damage to their relationship, by coming down heavily on Lapid in the process. 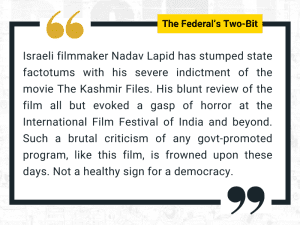 That someone from such an allied nation would turn around and deliver a stinging criticism of the film would have been the last thing in the calculations of New Delhi’s mandarins who invited him. Clearly, whoever offered Lapid the job of heading the IFFI jury did not do his/her homework.

Lapid’s remarks in sync with refuseniks

Lapid’s abrupt comment breaks some standard perceptions about Israeli society. A Jewish state, the country, created under violent and controversial circumstances in 1948, has for long had the reputation of a population solidly backing the government and in helping secure the borders (and expanding it) in the face of hostility from its Arab neighbours.

While the image of a committed Jewish populace is largely true, what has been overlooked is the fact that a section of the Israeli citizenry is severely critical of its government, in the way the Palestinians have been ill-treated, nay abused over the years, and in the manner the state has occupied areas that were meant for an independent Arab state of Palestine under the UN Partition Plan of 1947.

Many Israeli soldiers, over the years, have refused to fire on Palestinian civilians and laid down their arms in defiance of their officers’ orders. Called “conscientious objectors”, they are routinely arrested and thrown in jail. But this has not stopped them from acting as per their conscience, even at the risk of being prosecuted.

The numbers of these objectors, also called “refuseniks” run into the hundreds. Israel mandates compulsory conscription (32 months for men and 24 months for women) and those refusing to serve in the military are sent to jail, ranging from 10 days to a couple of months. They are then released. If they continue with their obduracy to join the military, they are sent back to jail.

In a recent instance, quoted by the media, a 19-year-old refused to join the Israeli Army as he was opposed to the “ethnic cleansing” by his government,  referring to the killing of Palestinians in the continuing conflict. There are hundreds of such refuseniks, though the exact data on their numbers is a closely guarded state secret. Some refuse on the grounds of religion, but the majority express their opposition due to the military’s violence against the Palestinians.

Among the biggest critics of the Jewish state’s human rights abuses in the occupied Palestinian territories is a human rights organisation run by the Israelis themselves. The group, B’Tselem, has over the years meticulously documented the atrocities committed by the Israeli military and government against the Palestinians under occupation. Most recently,  this Monday, the group highlighted the demolition of a Palestinian school by Israeli bulldozers in West Bank’s Massafer Yatta even as children were inside, crying.

B’Tselem, founded in 1989, is funded by a slew of European and North American NGOs and human rights organisations. The B’Tselem has taken the Israeli government to court on several occasions despite holding the view that the country’s Supreme Court is “one of the main mechanisms that permits the ongoing occupation and human rights violations by granting judicial legitimacy to Israel’s policies.”

Though there have been stray cases where the court has intervened in favour of B’Tselem, by dragging the government to court, the group has managed to bring to the notice of the world several controversial issues including alleged war crimes that the Israeli government would have otherwise shoved under the carpet.

The state is avowedly Jewish even as Israel professes to be a parliamentary democracy. The dissident Israeli community uses the democratic space to fight the government legally and oppose the government in public forums.

This may be daunting even in a secular democracy like India where, for example,  anyone seen to be supporting the Kashmiri fight for self-determination will most likely be charged under some draconian law like the UAPA and incarcerated for a long time.

Filmmaker Nadav Lapid, who made the pro-government section in the audience squirm, is considered a non-conformist like many others in Israel. In September this year, Lapid was among 250 Israeli filmmakers who protested against the establishment of the “Shomron Fund” set up by a Jewish hardliner, former culture minister Miri Regev. A statement signed by Lapid, along with the others, said the fund would be used to “whitewash the (Palestinian) Occupation” and called for Israeli filmmakers to boycott it.

His sympathies with the Palestinians was evident in his 2021 film Ahed’s Knee which draws inspiration from a Palestinian teenage girl who slapped an Israeli soldier.

Though Lapid belongs to a section of Israeli dissidents that is in a minority, they are high-profile and their acts of defiance are amplified by a section of the media that identifies with their cause. His act of plain-speaking at the Goa IFFI may have triggered a storm among the makers of The Kashmir Files and their supporters, leave alone the government. What stands out, though, is that dissidents can crop up in the most unexpected places just to make a point.