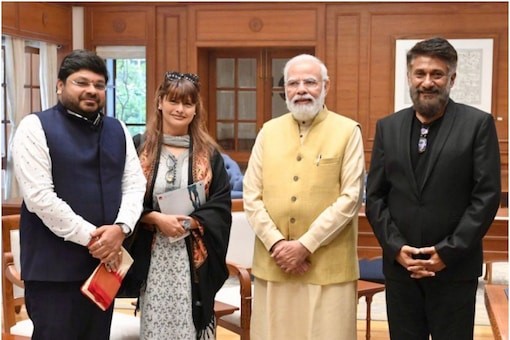 Speaking at the BJP parliamentary party meeting in Delhi, PM Modi (seen in the pic with Bollywood director Vivek Agnihotri (right) and actress Pallavi Joshi) hit out at critics who were against films that “reveal the truth”. Pic: Twitter

Bollywood director Vivek Agnihotri’s movie The Kashmir Files that has whipped up a lot of controversy and heated debate around the county is now backed by none other than Prime Minister Narendra Modi himself.

On Tuesday (March 15) PM Modi, who was speaking at the BJP parliamentary party meeting in Delhi, slammed critics who were against films that “reveal the truth” and claimed that there has been a “conspiracy” to discredit the film.

PM Modi said the people who are against the film are furious because it is highlighting a truth that was deliberately kept hidden.

Further, he hit out at the entire “Jamaat (gang)” that raised the flag of freedom of expression and how they have been furious for 5-6 days. “Instead of reviewing the film on the basis of facts and art, there’s a conspiracy to discredit it,” said Modi.

The movie depicts the exodus of Kashmiri Hindus from the state after they are targeted and killed by Pakistan-backed terrorists. The film stars Anupam Kher, Darshan Kumar, Mithun Chakraborty, and Pallavi Joshi among others.

According to PM Modi, his concern is not just the film but he wanted the truth to be brought out in a proper manner. He believed that it is beneficial for the nation to bring out the truth in the right way. “Some see one thing, others see something else,” he said. 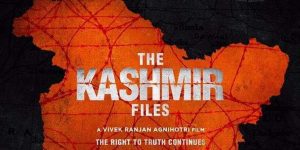 Hitting out at the movie’s critics, Modi alleged that the negative reactions to the films are coming from those who deliberately tried to hide “the truth” for many years. He asked people who do not feel that the film is right to make their own film. “Who’s stopping them? But they are surprised that the truth that they kept hidden for so many years is coming out. Those who live for the truth have a responsibility to stand with the truth at such a time,” PM Modi said.

Meanwhile, several BJP ruled states like Karnataka, Gujarat and Madhya Pradesh have exempted The Kashmir Files from entertainment tax. Tripura and Goa on Monday announced they will follow suit as well, while Assam CM Himanta Biswa Sarma has declared that he and his entire cabinet will watch the film. In Karnataka, assembly Speaker Vishweshwar Hegde Kageri announced that the film will be screened for legislators.

The Madhya Pradesh government has said policemen in the state will be provided leave to watch the film.

Ladakh BJP MP Jamyang Tsering Namgyal demanded in Lok Sabha that the film is exposing a bitter truth and hence, it should be exempted from tax. However, there have been dissenting voices too in this chorus of support for The Kashmir Files.

Bahujan Samaj Party (BSP) member Danish Ali for example pointed out that whether it is “Kashmir Files or Gujarat Files”, films that create feelings of hatred should be banned. Meanwhile, the Kerala Congress unit in its tweets blamed the BJP-supported V P Singh government in the 1990s and also the then governor Jagmohan for the exodus of Kashmiri Pandits from the Valley.

A leading newspaper in the south said that “employing some facts, some half-truths, and plenty of distortions, it propels an alternative view about the Kashmir issue, with the intent to not just provoke… but incite”. And that the Kashmiri Pandit’s pain is real and it required a more nuanced and objective telling.

Though the film is “propagandist”, cementing the current dispensation’s favoured discourse, one reviewer said that it does manage to tap into the grief of the displaced Pandits. Meanwhile, the film is raking in the moolah in the box office and has domestically made nearly 15.05 crores in just four days of release.