Why is the birthday of a nonagenarian politician being widely celebrated by young people in social media and that too cutting across party lines? He has not been in the public domain for the last couple of years, with age finally catching up on him and doctors recommending complete rest. But on his 98th birthday, social media greets him as the ‘revolutionary youth’.

That is the curious case of Comrade VS Achuthanandan, who is often called ‘the Fidel Castro of the Indian Communist movement’.

This communist leader was part of the Nationalist Movement, one of the fearless heroes of Punnapra-Vayalar struggle, jailed and tortured for a long time. He was the member of the CPI(M) politburo from 1985 to 2007. VS was the eldest Chief Minister in Kerala history and probably the most popular leader of Opposition in the history of Indian assemblies. But still, why he is being loved and celebrated even today?

VS was the state secretary of the Kerala unit of CPI(M) from 1980 to 1992. It was just after the Emergency and they were decisive years for the CPI(M) in Kerala. Many communists were being drawn to the extreme but romantic ideology of Naxalites; criticism against trade unions for sabotaging the industrial climate of Kerala was gaining ground in society and media bashing of the student wing for the political fights in college campus were some of the key challenges faced by the party.

Also, one of the most popular leaders of north Kerala, MV Raghavan was thrown out from the party and KR Gouri Amma was facing disciplinary action. The CPI(M) not only successfully overcame these difficult times but went on to become highly popular in the state. But the strong-willed state secretary was always pictured as a villain in the media. The narrative at that time was that he had choreographed the ouster of MVR and Gouriamma from the party.

His crude vocabulary and body language were mimicked and ridiculed. In cartoons, VS has always been drawn as a hooligan thug. In 1992, the popular CPI (M) leader EK Nayanar was elected as the party secretary after three consecutive terms of VS. And, VS took over the seat of the leader of the Opposition. He was 71 years old then, but it was the beginning of a new chapter in VS’s political life.

The incarnation of VS as a popular, mass leader has lots to do with the progress of visual media in Kerala. His much-ridiculed strident and crude vocabulary brought him a lot of attention and turned him into a popular figure in the political landscape of Kerala. He became the champion of women’s rights and the environment as well.

VS intervened in every people’s issue as the leader of the Opposition and as the CM. His highly-publicising visits, when he was in his eighties, to Plachimada (due to the water pollution by Coco-Cola factory), Mathikettan Shola (encroachment by land mafia) and Marayoor (sandalwood looting) were telecast live on prime time television. His vow as CM ‘to capture and punish every criminal who tries to attack modesty and freedom of the womenfolk’ was applauded widely.

VS was considered as the messiah of the downtrodden and subaltern society. When the party denied him a ticket to contest elections, common people hit the road with placards and banners. His rebellious image inside and outside of the party remains imprinted in people’s minds and fired their imagination.

Also read: Why the jihad bogey against Kerala is a disaster in the making

Comrade VS was born on October 20, 1923. His parents were Velikkakathu Sankaran and Akkaamma, who hailed from Punnapra in Ambalappuzha taluk of the then Travancore dynasty. He lost his mother when he was four and father at eleven. His formal education came to a rude end with his father’s death. He was in the seventh class at that time and he started working as a sewing assistant in a cloth shop.

In 1940, at the age of 17, he became a member of the Communist Party. Legendary leader P Krishnapillai spotted the young man and asked him to work among agricultural labours. There he became close with one of the greatest leaders of the communist movement of that time, KV Pathrose, popularly known as Kuthakkaran Pathrose. He was the chairman of Punnapra Vayalar action committee and with his guidance, VS started organising agricultural labours. The rest, as they say, is history. 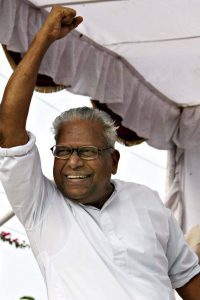 VS, who was a central committee member of CPI (M) since its formation, became the state committee member of the Communist Party in 1954 and a National Council member in ’59. He was an elected member of the Kerala Assembly seven times, the leader of Opposition three times and CM in 2006-2011. The veteran had held every possible post in the party and in the government. But he gained maximum popularity as the leader of Opposition.

If you look at the eight decades of public life of this 98-year-old ‘young’ comrade, you can see that. He is always been a leader of Opposition. That is the curious case of his life. Even in the forties, when the communist party was a small group of devoted, spirited and idealist men and women, VS always had his own different opinion within the party. When he walked out with AKGopalan, Harkishan Singh Surjeet and Jyoti Basu from CPI national council, he was one of the youngest among them.

Even after becoming CM, he didn’t want to lose this opposing mindset. That is his spirit. He fought with age as well. In 2011, at the time of the state Assembly election campaign, Rahul Gandhi mentioned him as an old man. He was very happy to respond to that. He quoted the poem of TS Thirumumbu : ‘My elderliness is not having grey hair,  My youthfulness is not having black hair, my youthfulness is not yielding in front of the arrogant feudal lords.’

He refused to yield. Thus he is young. That’s why VS is still a revolutionary youth.