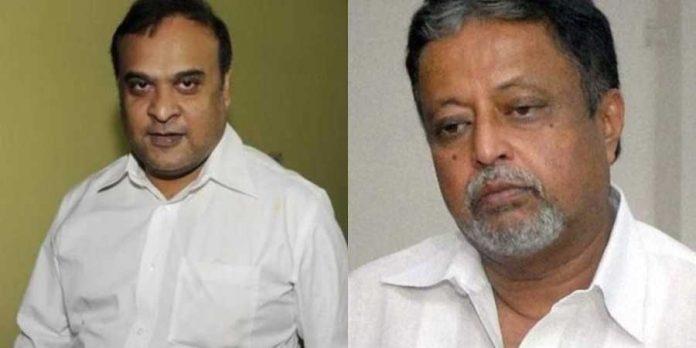 Himanta Biswa Sharma (left) and Mukul Roy had started off widely perceived as the number 2 in their parties – Mukul Roy in Trinamool and Himanta Biswa Sarma in the Congress. Pic: PTI

Both were widely perceived as the number 2 in their parties – Mukul Roy in Trinamool Congress and Himanta Biswa Sarma in Congress. Both were master strategists – during elections or otherwise. There was just one difference – Sarma was keen to be minister, health minister particularly, while Roy loved being the party boss in the best traditions of Bengali party commissars like Atulya Ghosh and Promode Dasgupta.

Then both got upset when their leaders, Tarun Gogoi, the late former Assam Chief Minister and Mamata Banerjee, West Bengal CM had inducted possible political heirs – one his son, the other her nephew. The Sarada scam exploded, before it, the Louis Berger scam in Assam and after it, the Narada scam in Bengal, providing both Roy and Sarma a stronger reason to go saffron.

For the first few years, both leaders did impress their top bosses. Sarma was seen as the architect of the 2016 state poll victory, while Roy was credited for the BJP’s fantastic 18 out of 42 Lok Sabha seats performance in Bengal. Sarma was made convenor of the BJP-led Northeast Democratic Alliance and Roy, the national vice-president of BJP.

The two were very different when it came to contesting elections. While Sarma enjoys playing the trouble shooter in other north-eastern states, even Bengal, Roy was reluctant to play the big foot of Delhi anywhere else other than in Bengal. As BJP hyped the Bengal contest into a 2021 battle royale, central minders like Kailash Vijayvargia, Shiv Prakash or Arvind Menon started to overrule Mukul Roy at what he did best – election management. With the induction of Suvendu Adhikari, Roy suddenly faced competition.

Also read: Mukul Roy is back in Trinamool; party says more leaders on their way

The Delhi commissars had a card now to cut Roy to size, little realising Suvendu was a Midnapore star, not a state-level strategist like Roy. The BJP paid for it in electoral terms – 18 Lok Sabha seats ( equivalent to 121 in state Assembly) in 2019 and 77 seats in 2021 state Assembly polls.

As Roy withdrew into a shell with the polls drawing near, sulking at the demonstrative arrogance of the Delhi commissars, Sarma took charge of the campaign in Assam, ensuring that 70 to 80 per cent of the party nominees were personally loyal to him. Roy also managed to get party tickets for many of his loyalists in BJP. 148 of the 294 BJP candidates in West Bengal were Trinamool or other party defectors, most of them were loyal to Roy.

But partly because Bengal does not like defectors and partly because Roy was sidelined in the campaign (which became a Delhi show), only 6 of the 148 turncoats won. Mukul Roy lost his card and his interest in BJP waned. He set up a covert contact with Mamata much before the results were out on May 2.

Call him the Trojan horse or even “biological refuse” or “corrupt criminal”, Mukul Roy was a trump card BJP did not use properly. They tried to tweak Bengal their way, rather than be a Roman in Rome. You need a Clive to use a Mir Jafar properly, don’t you?

Now on the day Mukul Roy, son Subhrangshu in tow, reached Trinamool office on Kolkata’s Eastern Bypass to seal his return home, Sarma was in a long 75-minute meeting with RSS chief Mohan Bhagwat in Nagpur.

“My association with Bhagwat is very old. It was there even when I was in the Congress. My brother is also associated with ABVP. Before recent elections, he visited my house and had food. He also met my mother and gifted books to my children,” Sarma told a select group of journalists here after meeting Sarsanghchalak Mohan Bhagwat earlier in the day.

There lies the difference between Roy and Sarma. During his four years in BJP, Roy has never rushed to RSS headquarters or kowtowed to the Nagpur commissars to seal his position in BJP.  In fact, he attracted much criticism inducting a controversial Muslim TMC legislator into BJP, which got Dilip Ghosh fuming at the High Command.

Suvendu Adhikari, on the other hand, endeared himself to the saffron biggies with his ‘ mini Pakistan’ remark and similar anti-migrant tirades, conveniently overlooking the memories of men like Abu Sufian and Abu Taher, who had guarded him against the Red Brigade toughies during the Nandigram movement.

Himanta Biswa Sarma had constantly done what Adhikari did after joining the BJP –raise the ‘ Jinnah ‘ bogey to demonise immigrant Muslims and his more recent scare-mongering about even a Muslim takeover of Kamakhya temple. The RSS top brass, initially against giving top jobs like the CM or Leader of Opposition post to turncoats, have been sufficiently convinced of Sarma’s and Adhikari’s Hindutva credentials.

Though this time, the BJP had no choice but to make Sarma the CM. 43 of the 60 BJP lawmakers were his loyalists and he was sure of getting a homecoming welcome in the Congress who had won 29 seats. 72 in a house of 126, not calculating the AGP and the Bodo legislators who would surely support Sarma. That’s like leaving nothing to chance.

For politicians, home is where one gets to exercise power and influence. Peace is also linked to power. Both Roy and Sarma, similar starters, are finally home in their own way. And one cannot rule out they won’t be home in Delhi one day.