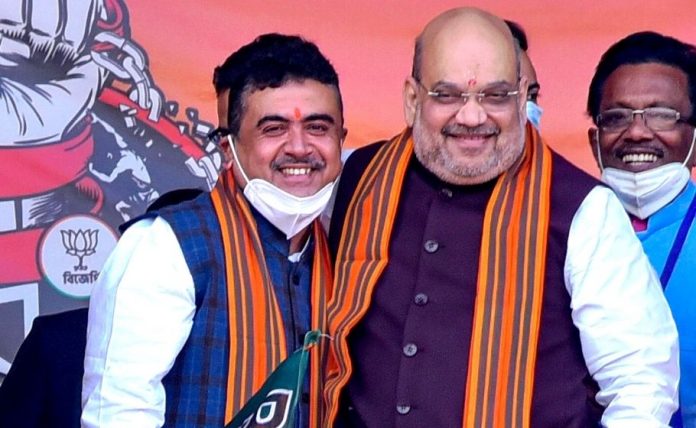 The Bengal BJP leadership was unaware about the visit of Suvendu Adhikari (left) to Delhi recently. File Photo

The growing clout of turncoats in the Bengal BJP at the expense of the old guard replicates the strategy the party’s central leadership has been adopting in the North-East.

Suvendu Adhikari, who had switched to the BJP from the Trinamool Congress in December last year, was called to Delhi earlier this week to brief the Bengal situation to the party’s top leadership comprising Narendra Modi, Amit Shah and JP Nadda.

Party’s state president Dilip Ghosh was in the dark about Adhikari’s trip to Delhi where the latter had a 45-minute discussion with Modi on Wednesday (June 9) on post-poll political violence and other issues concerning the state.

A day earlier the former lieutenant of TMC supremo Mamata Banerjee had a series of meetings with senior BJP leaders such as Shah, Nadda, Dharmendra Pradhan, among others.

Significantly, when Adhikari was briefing the party’s central leadership, the state unit was holding a crucial review meeting in Kolkata for the party’s defeat in the assembly elections.

Apparently upset over the invitation to Adhikari, Ghosh told media persons that he was not aware as to why Adhikari had gone to Delhi. “Only leaders in Delhi can say why he (Adhikari) has gone there,” Ghosh retorted.

Immediately after the review meeting in Kolkata, three more TMC deserters and now BJP MPs Arjun Singh, Soumitra Khan and Nishith Pramanik too suddenly flew to Delhi to have an audience with the BJP’s national leadership.

That the three do not enjoy the best of relations with Ghosh is an open secret in the BJP circle.

Earlier, Adhikari was picked over old-timers like Manoj Tigga, who had held the post since 2016, to be the leader of the BJP legislature party in Bengal, a position that made him leader of the opposition in the state assembly.

Adikhari having the ears of BJP top leadership became evident when Prime Minister Modi invited him at the meeting to review the impact of Cyclone Yaas in the state at Kalaikunda airbase in West Midnapore on May 28.

Chief Minister Mamata Banerjee took serious exception to the BJP MLA’s presence in the “official meeting”, which she had excused herself from attending.

Banerjee was apparently not the only one miffed by the Adhikari’s presence in Kalaikunda. Ghosh’s camp too viewed the invitation a clear undermining of the party state president, according to BJP sources.

They said it all started during the electioneering itself. Adikhari was given equal, if not more, importance as that of party state president in the campaigning. In ticket distributions, the new entrants close to Adhikari were mostly given preference over the traditional party leaders, several of BJP’s old guards were then left grumbling.

BJP veteran Tathagata Roy has openly blamed the party leadership’s decision to give tickets indiscriminately to “garbage from the TMC” for the electoral setback in the state.

“Those who were welcomed by the party with arms wide open ignoring the traditional BJP functionaries are now trying to return to the TMC,” Roy said as many of the turncoats now indicate their willingness to change their colours again.

The party central leadership’s preferential treatment to Suvendu and his coterie to put the BJP house in order at a time when a section of turncoats is expressing their desire to return to the TMC did not go well with many state BJP leaders.

They pointed out that only after Ghosh was made the BJP state president in 2015 that the party came into the reckoning in Bengal. In the 2019 Lok Sabha elections, the party’s vote share had jumped to over 40 per cent. In the assembly elections, it dropped by about 2 per cent.

Ghosh was deputed to the BJP from the Rashtriya Swayamsevak Sangh (RSS), where he served in various capacities, including an assistant to KS Sudarshan, the former chief of the BJP’s ideological fountainhead.

Adhikari, however, tried to downplay his sudden rise in stature. “Dilip-da led the party from the front during the elections. We will continue the fight shoulder-to-shoulder with him,” he told media persons in Delhi.

Those keenly observing the BJP politics in the region see the development as a continuation of the strategy the saffron brigade applied in northeastern states, where, like Bengal, the RSS traditionally did not have much influence.

“To capture power in north-eastern states, the BJP went for a shortcut. It roped in several senior leaders from the Congress and other regional parties and handed over the party reins to them,” pointed out Dipankar Roy, the former editor of the Meghalaya Times.

He said the party had to bank on “hired soldiers” as unlike in the Hindi heartland, the RSS did not have extensive organizational reach to influence election results in north-eastern states or Bengal.

Barring Biplab Kumar Deb in Tripura, not a single BJP government in the North-East is headed by a traditional BJP-RSS functionary.

Almost all BJP MLAs and ministers in Arunachal Pradesh are former Congressmen and party veterans like Tapir Gaon, the East Arunachal MP, has been sidelined.

Similarly in Manipur, the BJP leadership preferred N Biren Singh to lead the party government in the state ignoring old guards such as Th Radheshyam, P Sharatchandra Singh and Kshetrimayum Bhabananda Singh under whose leadership the saffron party tasted its maiden electoral success in the state in 2017.

Biren Singh switched over to the BJP from the Congress ahead of the 2017 assembly elections in Manipur. Prior to joining the BJP, the footballer-turned-journalist-turned politician was an important minister in the Okram Ibobi Singh-led Congress government and was regarded as a right-hand man of the Chief Minister.

Immediately after joining the BJP, Biren Singh became one of the most important leaders of the party in Manipur holding the post of spokesperson and co-convener of the election management committee.

After he was made the chief minister, the BJP central leadership gave him total control, bulldozing all voices of dissents from the party’s old guards. The central leadership did not budge from their position even when his government faced rebellion twice from the MLAs of the BJP and its allies seeking removal of Biren Singh from the CM’s post.

The BJP central leadership, however, had no qualm to change the leadership in Assam recently to placate Himanta Biswa Sarma, who has emerged as the tallest BJP leader in the North-East. Just as Biren Singh, Sarma was number two in Tarun Gogoi-led Congress government in Assam, before he jumped ship in August 2015, just a few months ahead of the 2016 assembly elections.

In 2016, the BJP, however, preferred another imported leader Sarbananda Sonowal over Sarma. Sonowal had migrated to the BJP from the regional outfit Asom gana Parishad in 2011. Even in choosing Sonowal as its chief ministerial face then, the BJP had ignored the legitimate leadership claim of those who had built the party in Assam from scratch.

In this year’s assembly elections, the BJP did not project the sitting chief minister as its face, and in an unprecedented move even replaced him by Sarma despite his government being re-elected.

In the newly formed Sarma-government, many BJP veterans were denied a ministerial berth. The prominent among them are two former state presidents Siddhartha Bhattacharya and Ranjit Dutta.

Earlier, in ticket distribution Sarma loyalists and party hoppers were given preference over core leaders who had helped build the BJP in Assam.

“I could have become a minister in 1985 when AGP came to power, but I chose to stick to my party. It is sad to see how ideology has now disappeared in the party,” senior BJP leader Ramen Deka, who had been with the saffron outfit from the Bharatiya Jana Sangh days, rued recently.

The growing influence of leaders from non-RSS background in the BJP will be disastrous in the long-run as these turncoats will not hesitate to desert the party during its bad time, said former BJP MP from Assam R P Sarma.

But as of now, the party strategy seems to be working at least in the North-East.

Trinamool sets sights on Tripura after victory in West Bengal

‘Don’t insult me like this,’ Mamata tells Modi as row ov...