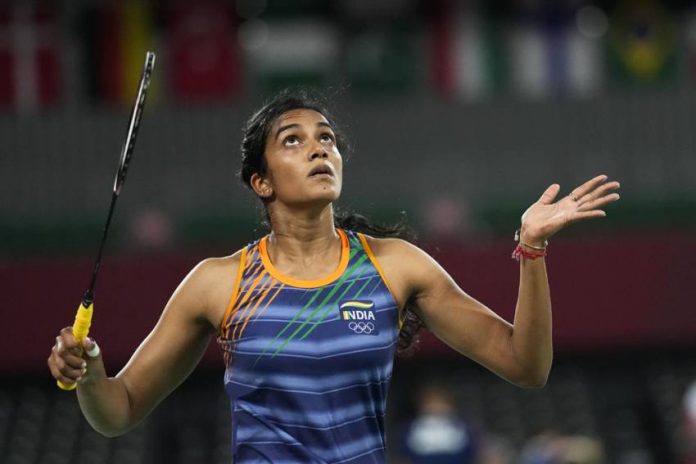 “Even though it was an easy first match I didn’t take it in an easy way. It wasn’t like I wasn’t prepared. Every time, it is very important to be focused and be prepared for every single point in every single match,” Sindhu said after the match.

“It was quite an easy match but I made sure that we had some rallies and I got used to the court.”

Sindhu, who is currently the world number seven will be next seen playing against Hong Kong’s world number 34 Cheung Ngan Yi in the group stage.

Also read: Sindhu one of the favourites to win gold, says Gopichand

Rio Games silver medallist Sindhu started on an attacking note but briefly found herself trailing 3-4. However, she moved ahead quickly with Polikarpova making unforced errors. Sindhu entered the break with 11-5 lead.

Soon, Sindhu was on a roll, grabbing 13 straight points. She used her trademark straight and cross court smashes and drops to trouble the Israeli, who couldn’t utilise the few opportunities that came her way.

Sindhu sealed the first game in her favour when Polikarpova missed a shot.

Polikarpova, who was playing with a strapped knee, continued to struggle with her strokes as Sindhu opened up a 9-3 lead in the second game and then entered the mid-interval with a massive seven-point advantage. It was business as well after the break, with Sindhu riding on the errors of her opponent. Another wide shot from Polikarpova gave Sindhu 13 match points. The Indian squandered three of them before Polikarpova once again sent the shuttle out to end the match.

On her approach to playing a lower-ranked opponent, Sindhu said, “I think it’s important to make sure that you play all of your strokes and get used to them. All of a sudden if you’re playing with a higher-ranked player or a stronger opponent, it’s not that you can just play that type of strokes, it’s important to get used to the situations also.”

‘Working on my aggression’

Speaking about her preparation Sindhu said she has worked on her aggression in the past five years and promised a very “different” version of herself.

Five years back, Sindhu was not considered a medal prospect but she stunned the world with her stellar run which ended with an unprecedented silver medal on her Olympic debut in Rio de Janeiro.

However, this time around, the player from Hyderabad is India’s biggest hope for a gold at Tokyo.

“Mentally, physically and experience-wise, a lot has changed. Coming to (Tokyo) 2020 is completely different; back then there were no expectations,” the reigning world champion said.

“I know that I have worked hard and given all my heart all of these years and I think it’s time to show now. I’ve been working on my aggression and my technique and you will definitely see a different Sindhu.”

The soft-spoken Indian ace was not known for her aggression till five years back and it was chief national coach Pullela Gopichand, who had transformed her into an aggressive player ahead of the Rio Games. It reaped dividends as Sindhu weaved a series of stunning performances to claim the silver.

“It’s always nice to get that medal back then at Rio,” Sindhu, seeded sixth, said. “Tokyo is a fresh start, I would say. It’s always important to just be ready every single day because you can’t expect that you will again be a medallist.

Also read: Pandemic break a blessing in disguise for me, says Sindhu

The Tokyo Olympics is being held without any spectators due to the COVID-19 pandemic and Sindhu said she will miss the crowd support.

“I’m sure I’m going to miss the crowd and spectators but I’m sure everybody (back home) is giving me that support and showing me their love and hoping for the best to happen.”