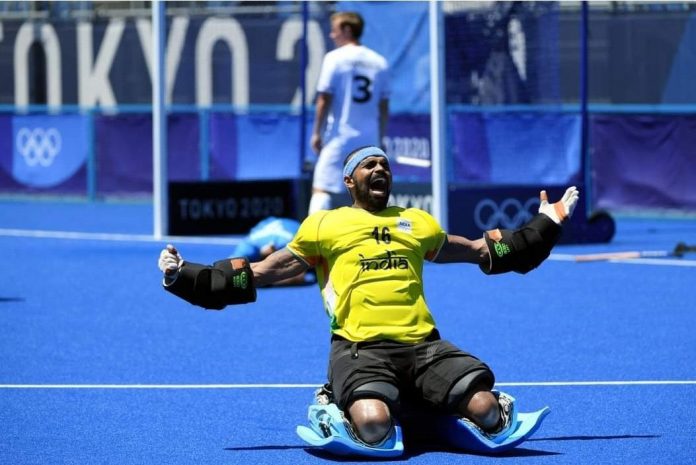 PR Sreejesh’s heroics in front of the goal saved the day for India | Photo: Twitter

The family of India’s hockey goalkeeper PR Sreejesh – whose heroics in front saved the day for the country – were glued to the television and they erupted with joy when the final whistle blew.

A video posted on Twitter showed three generations of the family in Kizakambalam, in Kerala’s Ernakulam district, whooping and clapping as the Indian team won their first hockey medal in Olympics in 41 years.

“It is a proud moment for us. A dream comes true for us. I am really happy my son Sreejesh played a key role in team India’s success,” he said.

The 35-year-old goalie made several saves in the dying minutes of the match, which India won 5-4 against Germany

“We were a bit upset when we lost in the semifinals. But I was sure the team would win a medal,” said Sreejesh’s wife, Annesya.

It wasn’t only family members though who were proud of their son. Kizhakkambalam was buzzing with excitement all day Friday, as journalists and well wishers made their way to the village. All those who came took the ‘Olympian Sreejesh Road’ – in 2014 the Kerala government had named the road in Sreejesh’s honour after the team won gold in Asian Games in Incheon, South Korea. Back then India had beaten arch-rivals Pakistan 4-2, securing a direct entry into the 2016 Rio Olympics.

More accolades await when Sreejesh returns from Tokyo. The Kerala Hockey Federation has already announced a reward of ₹5 lakh for the goalkeeper. The state government has also decided to host a grand reception for him.