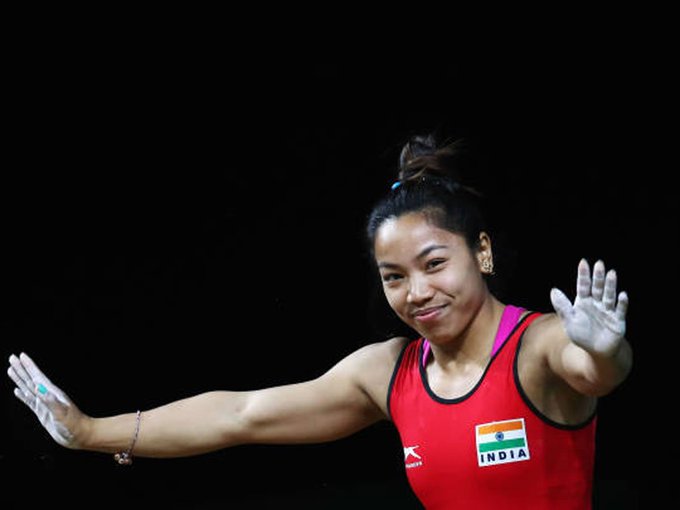 Mirabai and her coaches chose the weights carefully. File Photo

For any weightlifter, not even a loss is as humiliating as the phrase — “No lift’, which signifies a failed attempt. Mirabai Chanu lived with that for five years. Then just 21, Mirabai, competing in the 48 kg (now 49 kg), failed in all three attempts, once at 104 and twice at 106 at Clean and Jerk, in Rio in 2016.

Ironically, she is now the world record holder in Clean and Jerk at 119 kg, but on Saturday she did not need a new world record. She secured the silver with a strategic display and exorcised the ghosts of Rio.

It could not have been easy to live with the failure of 2016. But Mirabai did pick up the pieces with sterling performances, including the gold at the 2017 World Championships in Anaheim, California.

When China returned to the World Championship in 2019, Mirabai finished fourth. The top two spots went to China. The Tokyo gold medallist Hou was the silver medallist behind her own teammate Jiang Huihua.

Interestingly for Tokyo, China entered Hou for 49 kg ahead of Jiang and Zhang Rong, both of whom have better snatch lifts than Chanu.

How vital is strategy in weightlifting?

Strategy has a great role in weightlifting as in all sports. Choosing the right weight to lift in the allotted three attempts is the key. Wasting attempts with lower weight could cost you attempts, while a difficult, unrealistic choice of weight could prove disastrous.

On Saturday, Mirabai and her coaches chose the weights carefully. She succeeded at 84 and 87 in her first attempts at snatch, but failed at 89. Then to ensure that she was in contention for a medal, she went for 110 kg in her first clean and jerk attempt even though it was way below her best of 119 kg. Yet in these circumstances, it was good to be safe.

Back in 2000, Karnam Malleswari could well have had a chance at silver in her 53 kg category. I was in Sydney but I watched that competition on TV from the hockey stadium, where India was playing Poland.

Malleswari and China’s Lei Wiening had snatch lifts of 110 kg each while Hungary’s Erzsebet Markus was 2.5 kg better.

In clean and jerk, the Hungarian and the Indian started successfully at 125 kg and raised it to 130 kg each. Both were successful again. The Chinese for 132.5 kg and a successful lift put her ahead of the Hungarian, who despite an equal total had a higher body weight. Both had totals of 242.5 kg.

Malleswari and Markus had one attempt each left and the Chinese had two. All three went for 137.5 kg and failed. While the Indian and the Hungarian had exhausted all three attempts, the Chinese had one left and called for 145 and again failed, leaving her with a total of 242.5 kg and stayed ahead of Markus in the race for gold despite the same totals.

Malleswari, who had asked for 137.5 after 130, could have finished ahead of Markus by asking for and succeeding at 132.5 kg for a total of 242.5 kg because she was lighter than Markus but heavier than Lei.  Alas, no one worked out that strategy for her.

Mirabai, born in Nongpok Kakching village, 20km from Imphal was just five when the National Games came to Imphal in 1999.

The big idol for women sportspersons from the North East was Kunjarani, a multiple world championship medallist in women’s weightlifting, Her career was at an end by the time women’s weightlifting came onto the Olympic Games. Then came Mary Kom, who continues to defy age even now as she seeks to add a second Olympic medal to the bronze she had in 2012.

Obsessive about cleanliness, Mirabai almost chose archery when she was young. But as the story goes, back in 2008 when she was 13, she went with a cousin to Imphal to enrol herself at the Sports Authority of India (SAI) Centre in Imphal. She did not see any archery training. Instead, she saw pictures of the legendary Manipuri weightlifter Kunjarani. That changed the course of her sporting career.

Mirabai worked hard, travelled long distances of over 20 km, changed buses to reach the training centre each day. Fetching firewood from the forest and lifting pails of water strengthened her.

Steadily, she made her way to the Indian team and won a silver in the 2014 Commonwealth Games; then she endured the pain of Rio. She also had back injuries but overcame that and more. She won the world title in 2017.

The US has always been a favourite for Mirabai — she won the world title in the US in 2017. With the help of the government and SAI, Mirabai, accompanied by coach Vijay Sharma, went to St. Louis in the US to train and work on her recovery under Dr Aaron Horschig, a former weightlifter and a well-known physiotherapist. He helped Mirabai work her way back. The rest is history.

This year Mirabai was back in the US and flew from the US to Tokyo to redeem her career and most importantly put to rest the painful memories of Rio.

The author has covered every Olympic Games from 1992 to 2016