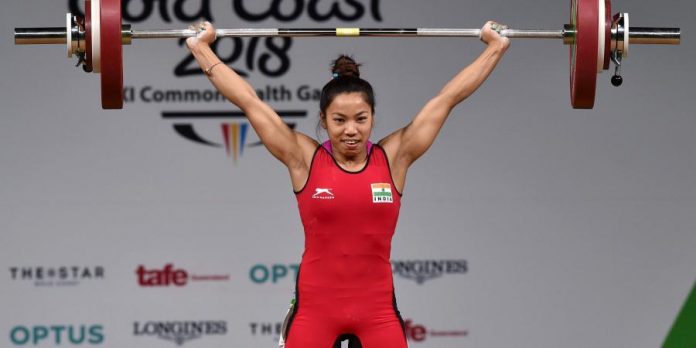 A new Olympic record was registered by Mirabai Chanu with a successful lift of 115kg in clean and jerk. File Photo

“I am very happy, I have been dreaming of this for the last five years. I am very proud of myself right now. I did try for gold but even silver is a great achievement for me.”

That was Manipur’s weightlifting sensation Saikhom Mirabai Chanu after winning India its first medal at the Tokyo Olympics after she won the silver medal in the women’s 49kg category.

“I am very happy to win the first medal for India at these Games. I don’t just belong to Manipur, I belong to the whole country,” Chanu said when asked what it meant for her as a Manipuri.

Chanu also thanked the entire nation through a tweet soon after her feat.

I am really happy on winning silver medal in #Tokyo2020 for my country 🇮🇳 pic.twitter.com/gPtdhpA28z

Considered her weakness in the run-up to the marquee event, Chanu attempted 84kg in her first snatch attempt. The Manipuri took her time and cleanly heaved the barbell. She lifted 87kg in her next attempt and raised the weight to 89kg, which was 1 kg more than her personal best of 88kg that she had lifted at the national championship last year. However, she was unable to better her personal best and settled for 87kg in the snatch event only behind leader Zhihui, who created a new Olympic record with an effort of 94kg.

Chanu said she was a bit nervous, but determined to bring a medal home.

“I’m very happy that I’ve won the medal. The entire country was watching me & they had their expectations. I was a little nervous but I was determined to give my best. I worked really hard for this. I tried my best to win gold medal but I wasn’t able to win gold; but I really tried. After my second lift itself, I understood I’ll bring a medal,” an elated Chanu told News18.

Chanu has a world championship gold medal, two Commonwealth Games medals — silver in 2014 and gold in 2018  — and an Asian Championship bronze in her kitty.

Could not have asked for a happier start to @Tokyo2020! India is elated by @mirabai_chanu’s stupendous performance. Congratulations to her for winning the Silver medal in weightlifting. Her success motivates every Indian. #Cheer4India #Tokyo2020 pic.twitter.com/B6uJtDlaJo

Wishing Mirabai on her success, PM Modi said her feat will inspire future generations. “Could not have asked for a happier start to @Tokyo2020! India is elated by @mirabai_chanus stupendous performance. Congratulations to her for winning the Silver medal in weightlifting. Her success motivates every Indian. #Cheer4India #Tokyo2020,” Modi tweeted.