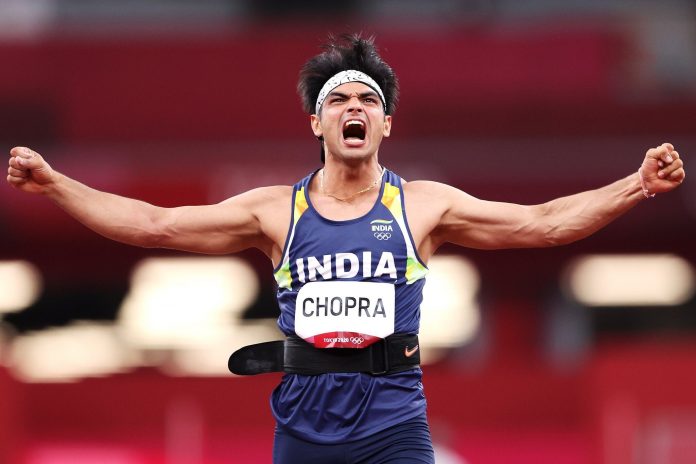 The Board of Control for Cricket in India (BCCI) has announced a cash reward of ₹1 crore for Chopra as well, and another ₹1 crore has been promised by Chennai Super Kings

It’s raining awards for the handsome young jawan from Haryana. After scripting history by clinching the first athletics gold of Independent India at the Tokyo 2020 Olympic Games, 23-year-old javelin thrower, Neeraj Chopra is being showered with cash awards from several state governments and private organisations for his stellar achievement.

Haryana Chief Minister ML Khattar on Saturday (August 7) set the ball rolling by honouring Chopra with a cash reward of ₹6 crore. The CM also made the Olympic gold medal winner the head of the upcoming Centre for Excellence in Athletics in Panchkula.

This is only part of the bonanza earmarked for the champion. Khattar pointed out that as per their sports policy, Neeraj Chopra will get a cash reward of ₹six crore, but also a Class-I job and a piece of plot of land at concessional rates as well, said a Hindustan Times report.

Not to be outdone, the CM of neighbouring Punjab, Captain Amarinder Singh too declared a special cash reward of ₹2 crore for Chopra. The reason that Singh gave for the largesse was that Chopra’s family traces its roots to Punjab and pointed out that “it was a proud moment for India and all Punjabis”. This is besides the ₹75 lakh that is due for a gold medallist from the Indian Olympic Association.

On this historic day where India bagged an Olympic Gold medal in an athletic event after 100 years, the Manipur State Cabinet has decided to honour the Javelin throw Gold medalist @Neeraj_chopra1 by extending a reward of Rs 1 Crore.

Meanwhile, the north-east state of Manipur, which has given world-class sportspersons to the country, has awarded Chopra ₹1 crore, to mark a historic day when India bagged an Olympic gold medal in an athletic event after 100 years. Manipur chief minister N Biren Singh tweeted that this decision was taken at a cabinet meeting.

Yes indeed. It will be my personal privilege & honour to gift our Golden Athlete an XUV 7OO @rajesh664 @vijaynakra Keep one ready for him please. https://t.co/O544iM1KDf

Chopra is indeed flying high, as India Inc are eagerly stepping forward to honour him. Anand Mahindra, chairman of Mahindra and Mahindra, has promised to award a brand new XUV 700 to Chopra when he returns to India. While realty firm Elan group chairman Rakesh Kapoor has announced a ₹25 lakh cash award for Chopra.

Indian airliner IndiGo too will give him unlimited free travel for one year. The offer is applicable from August 8, 2021 till August 7, 2022, said Ronojoy Dutta, Chief Executive Officer, IndiGo in a statement.

In his statement Dutta said they were all overjoyed to hear about his remarkable achievement. “You have made the country proud, and I know all IndiGo employees would be truly honoured to welcome you onboard one of our flights,” he said while making the announcement of the airline’s gift for the national hero.