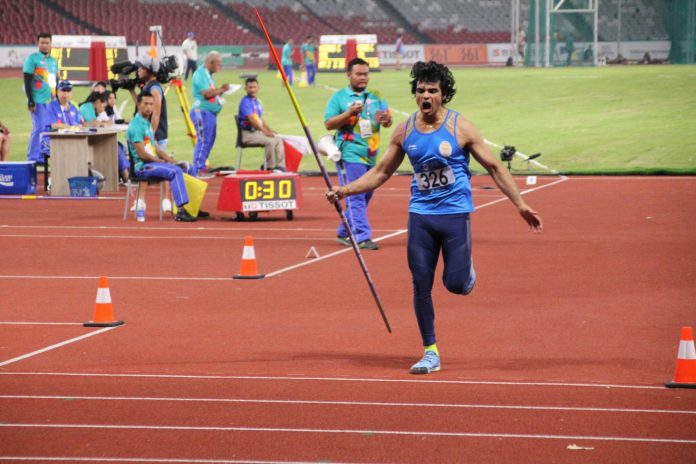 India’s Golden Boy Neeraj Chopra has dedicated his Olympic Gold, the country’s first athletic gold, to legendary athlete Milkha Singh, who died of COVID last June. Chopra also said his next target is to cross the 90-m mark, a feat he has not achieved so far.

Chopra, who took home the javelin Gold said, “I did not know it would be gold, but it’s an unbelievable feeling.”

Chopra had topped the qualification three days ago and did better than that in the finals as he produced a best throw of 87.58m to become only the second Indian to win individual gold in Olympics, and the first Indian track-and-field athlete to do so.

Also read: With 7 medals, Tokyo outing proves to be India’s best show EVER

“I dedicate this medal to Milkha Singh. Hopefully, he’ll be watching this from the heavens. It feels unbelievable. It is the first time India has won gold in athletics, so I feel very good. We have just one gold here in other sports. This is our first Olympic medal for a very long time, and in athletics, it is the first time we have gold, so it’s a proud moment for me and my country,” said Chopra.

Asked if he was surprised to win gold which also featured German great Johannes Vetter, he said, “In the qualification round I threw very well so I knew I could do better in the final. (But) I didn’t know it would be gold, but I am very happy.”

Few would have thought that Chopra would bludgeon his way to gold in such a dominant fashion at the grandest of the stage.

Just like in the qualification round, Chopra began with a bang by sending the spear to a distance of 87.03m and then improved it to 87.58m, his best of the day which none in the field could match.

His third throw was a poor 76.76m, he then fouled his next two attempts before a final effort of 84.24m. By the time the Nordic javelin left his right hand in his second attempt, he knew that it was going the farthest among all and he raised both his arms in jubilation, confident that the job had been done.

Also read: From a farmer’s family, Neeraj’s inspirational rise to the top of the world

Was there any pressure? “Because I had participated in a few international competitions, I didn’t feel any pressure in the final. It also helps when your first throw lands well. I felt confident after that first throw (of 87.03m),” Chopra said in a media interaction.

“After that throw, I knew that the Olympic record is 90.57m while my own personal best is 88.07m. So, I tried to target the Olympic record in subsequent throws. Javelin throw is a technical sport and not just about power, so I couldn’t better the second attempt (which fetched the gold medal),” Chopra added.

Chopra said his next target will be to cross the 90m mark.