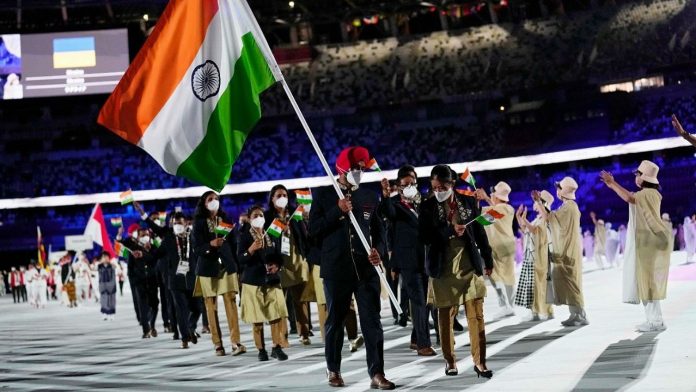 India’s previous best performance was at the London 2012 outing where our athletes won 6 medals.

India concluded its campaign at the Tokyo Olympics 2020 with a best-ever medal haul of 7 on Saturday (August 7) as Neeraj Chopra made history by winning a Gold — India’s only one — in the track and field event.

India’s previous best performance was at the London 2012 outing where our athletes won 6 medals.

Expectations were high this time despite COVID disturbing the Summer Olympic schedule several times because Indian athletes had done exceedingly well in international events in the last 5-6 years.

It was weightlifter Mirabai Chanu from Manipur who gave Indians the first smile by snatching a Silver in the women’s 49 kg category.

Boxers too fancied their chances, but it eventually it took Assam’s Lovlina Borgohain to get India a Bronze in women’s welterweight category.

Meanwhile, PV Sindhu disappointed badminton fans when she failed to win a Gold. She was beaten by World No. 1 Tai Tzu Ying in the semi-final in a spirited match. However, the Rio Olympic Silver medallist overcame the disappointment of a big loss to beat China’s He Bingjiao and snatch a Bronze.

Twenty-three-year-old Neeraj Chopra proved to be India’s ‘gold’en boy on Saturday, the second last day of the Tokyo Olympics. He earned a name for becoming the first Indian to claim a Gold in track and field event after Independence. Neeraj won the top medal in men’s Javelin. The Haryana government announced Rs 6 crore cash award for Neeraj, Class-I government job and a plot anywhere he wants in Haryana at a 50 per cent concession rate.

Wrestler Bajrang Punia lost a chance to win Gold in men’s 65kg freestyle category by a whisker, but ultimately claimed a Bronze, which came as some consolation for the energetic performer.

Ravi Kumar Dahiya from Haryana shed the underdog tag to bag a Silver in the men’s 57kg freestyle event. He became the only second Indian wrestler to reach an Olympic final.

Hockey, India’s national game, has always given hopes of a medal, considering our glorious past record. The men’s and women’s teams tried their best to live up to fans’ expectations and put up a spirited show which has won them a big applause. The women’s team led by Rani Rampal did more than what was expected of them by reaching the semi-final, beating medal favourites Australia in the quarters.

But it was the men’s hockey team which won a medal at Olympics – India’s first in 41 long years! The Men in Blue beat Germany to claim a Bronze.

Shooters and archers were expected to win big, but they failed to live up to fans’ expectations. Shooter Saurabh Chaudhary salvaged some pride as he finished as the finalist at the Tokyo Games.

Golfer Aditi Ashok exceeded expectations by a stellar performance, but lost a Bronze on Saturday by a narrow margin.