A wanderer, drunkard, anarchist and mystic… that’s Tamil poet Vikramadityan (aka Nambirajan) in a nutshell. But the more you enter the layers of his body of poetry, the more you witness the co-existence and ironies of his day-to-day encounters.

With their sharp, conversational idiom, the free-verse poems written by Vikramadityan remain a bridge between traditional and modern Tamil poetry. And that’s not the only reason why he was chosen for this year’s Vishnupuram Award, instituted by a group of readers of veteran bilingual writer B. Jeyamohan.

Formed by the readers of Jeyamohan in the name of his masterpiece novel “Vishnupuram”, the Vishnupuram Elakkiya Vattam (VEV) has been documenting the life of Tamil writers languishing in anonymity since its inception in 2009. Vikramadityan has published more than 16 collections of poems, but he remains an unsung hero, knowing only a few who are closely associated with him.

Even though most of his poems are born between the gulps of liquor that he consumes, it reflects a conscious but plain account of what he encounters in the social fabric of the world that he lives in.

“I don’t care much about any award or recognition. I have been writing poems without any such recognition for more than four decades. I write because I want to write. But this one (Vishnupuram Award) is special because it is given by a group of readers of “Vishnupuram”,” says Vikramadityan, while speaking to The Federal.

Also read: A little-known Tamil epic based on the freedom struggle & Gandhism

Fondly called “Annachi”, he decides what he has to write before he buys a bottle of liquor. If he is in a bar, he writes on empty cigarette packets. “You can compare him with late Malayalam wanderer-poet A Ayyappan. But unlike Ayyappan, he has deep knowledge of ancient Tamil poetry and Saivism. He can be said as a bridge between old traditional poetry and modern poetry. His poems are sharp modern poems, but their diction is very close to Tamil traditional poetry. He has a strong belief in Saivism and has an interest in astrology as well. This combination is very rare in Indian poetry,” says Jeyamohan.

Born in 1947 in Tirunelveli, Vikramadityan holds a significant place in modern Tamil poetry today. “In contrast to some modernist poets who employed sparse imagery and an unemotional tone in their poems, Vikramadityan, when he arrived in the 1970s, wrote poems that flowed, with the immediacy and authority of speech,” says Rajagopalan J, coordinator of the Vishnupuram Elakkiya Vattam.

Vikramadityan has published 16 poetry collections so far, including “Aakaasam Neela Niram” (The sky’s colour is blue), “Ulvaangum Ulagam” (The retreating world) and others. “His poems resound with a colloquial rhythm like the utterances of a village god, and the lines speak directly to the reader. Some of his poems are deeply rooted in Sangam poetry,” he says. 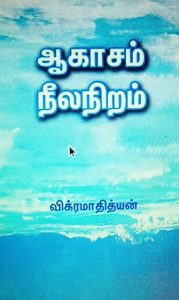 Vikramadityan’s is a kind of plain poetry, according to Jeyamohan. “It’s a kind of flat poetry. It may end up in one line as an anecdote or a statement. But the words attain a sense of meaning and power when they are used conversationally by him. And this makes Vikramadityan different,” says Jeyamohan. “He is an outsider and a traveller. If you try to put him in a format, then you will soon realise that he doesn’t fit there. He travels from one place to the other, with his poetry and gulps of liquor.”

Vikramadityan faced a troubled childhood after his father Azhagiya Sundaram left for Chennai to act in movies in the late 1950s. Even though he appeared in some petty roles in popular movies of those days, it didn’t help the family. Frustrated, Vikramadityan too left for Chennai, following in the footsteps of his father. In Chennai, he watched actors like MGR and Sivaji Ganesan, MR Radha travelling in their cars. It was during this time, he got attracted to songs in films written by poets such as Kannadasan and Pattukkottai Kalyanasundaram.

At the same time, he was influenced by the ideology of the Dravidian movement. Leaders like Anna, Periyar influenced the young Vikramadityan. He did many jobs to meet the two ends. He started selling ‘muruku’ in theatre for a living and then he worked as a helper to the iron merchant in Jafferkhanpet. Despite all the financial mess, he wanted to study. A school dropout, he started learning Tamil by reading the political newspapers and magazines of the Dravidian outfits. He then started working with some Tamil tabloids.

But discipline was a problem and he couldn’t continue his job for long. However, he took reading seriously. In 1984, he published his first collection of poems titled “Aakaasam Neela Niram”. It was a great break for Vikramadityan as a poet in the literary world of Tamil. “The 1970s produced many literary works, novels as well as poetry in Tamil. Those works that I read evoked tremendous response in my literary and creative space,” he says.

However, as a poet, he was in search of traditional Tamil poetry. There was a reason. “I used to hear the Andal Pasuram from the nearby Vishnu temple and Thirunavukkarasar Thevaram from the Siva temple. All these devotional songs entered my mind and then evoked a sense of inner rhythm, which made me study Tamil devotional and Sangam poetry in detail later,” says the 74-year-old poet. The influence of poets like Nakulan, Gnanakoothan and Pramil helped Vikramadityan to look forward to finding his form in poetry.

Although there are people, genres and events that influenced Vikramadityan, he considers those are processes only. “There is an inner rhythm. I don’t know how to explain it. And that makes me write,” he says. 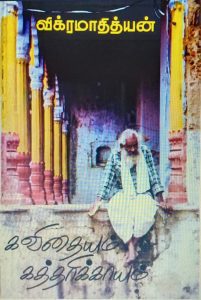 They are well-used
to the smell of the stink-cage/No particular complaints./ Prey, fed on time./
A mate, paired in the right season./ Breeding allowed./ No bar, on long, languorous naps./ If roused to anger, they can always throw themselves against the cage-bars,/ and it is no crime either to go around in compulsive circle-walks./ There is always the right to growl./ Only, without making a face,/ they must show all their tricks/and heed with proper fear,/the whip-cracks, like a good boy./ They say,/one day, in the beginning,/a dense, green forest/these caged-tigers roamed. 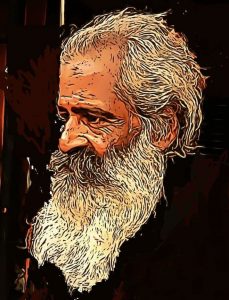 The poet will receive the award at a two-day seminar organised by VEV in the second week of December in Coimbatore. A cash prize of Rs two lakh and a shield will be presented to the winner. Unlike many award ceremonies, the VEV has a three-month preparation drive for the event. Every day, a member of the group will circulate an article about the works of Vikramadityan. “The selected articles will be released in the form of a book with a cover picture of Vikramadityan. Besides, a documentary on the life and works of Vikramadityan will be released at the function,” says Rajagopalan.