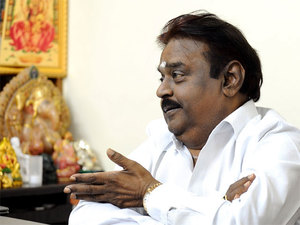 A MIOT spokesperson said that after evaluation, Vijayakanth seems to be normal and tested negative for COVID. He is just undergoing a routine health-check for his kidney issues

Tamil actor-turned-politician, Vijayakanth, has been admitted to a private hospital in Chennai in the wee hours of the morning on Wednesday (May 19).

According to television reports, Vijayakanth reportedly complained of discomfort at around 2 am and was taken to MIOT hospital, where he was admitted in the intensive care unit.

Meanwhile, a MIOT hospital spokesperson confirmed to The Federal that Vijayakanth was admitted because he had felt some “discomfort” last night. “After evaluation, he seems to be normal, he has tested negative for COVID and is just undergoing a routine health-check for his kidney issues,” he added.

The political party that Vijayakanth had founded, the 20-year-old Desiya Murpokku Dravida Kazhagam (DMDK) denied that their leader’s health is in a serious condition. Their statement said that DMDK chief ‘Captain’ Vijayakant is admitted to a private hospital in Chennai for undergoing routine medical checks and that the hospital had informed them that their leader was in good health.

“They have also said that Vijayakant will be discharged and he will return home within a day or two,” the statement added, reported News Minute.

This is the second time Vijayakanth has been admitted to the hospital during the pandemic.

He had contracted the COVID-19 virus last year, which he had found out by accident during a routine visit to MIOT hospitals. Though, the actor has some serious health conditions like kidney and liver ailments, his symptoms were mild and he recovered. It was suspected that he had got the infection while participating in the DMDK party’s 16th annual celebration.

Vijayakanth has been suffering from ill-health and has been staying away from the spotlight for that reason. In fact, the former leader of Opposition in the TN Legislative Assembly did not contest the 2021 Assembly elections. Instead, his wife, Premalatha Vijayakanth stood from Virduhachalam and lost managing to muster up 13.7 per cent vote share.

DMDK party, which had tied up with TTV Dhinakaran’s Amma Makkal Munnetra Kazhagam, drew a blank in the 60 seats they had contested. Probably, the captain’s absence had an impact on their performance. Vijayakanth, also known as Karuppu MGR because of his huge popularity with the masses in the state, was last seen in a cop film titled Virudhagiri a decade ago. In this film, he even leaves Scotland Yard gobsmacked with his death defying stunts.

In this film, which he also wrote and directed, Vijayakanth was reportedly inspired by Hollywood hit movie, Taken. Later, he made a cameo appearance in the 2015 film Sagaptham, which marked the acting debut of his son Shanmuga Pandian.