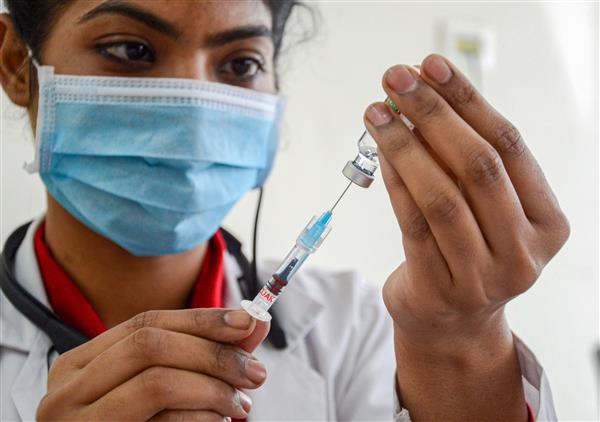 Once opened, a vial, stored at a temperature of 2 to 8 degree C, must be used within four hours. PTI File Photo

With the number of COVID cases increasing and vaccine supply dwindling in Tamil Nadu, the state has finally cut down on the wastage of vials. For several weeks, the state topped the wastage chart with 8.33 per cent of jabs going down the drain. However, the data released on May 8 showed the wastage in the state has come down to 3.94 per cent.

Among all states and Union Territories, Lakshadweep has the maximum wastage of vaccines at 22.74 per cent. Among states, Haryana is on top with 6.65 per cent, followed by Assam (6%)

Once opened, a vial, stored at a temperature of 2 to 8 degrees Celsius, must be used within four hours. Nurses return unused doses to pharmacists the same day, and these unused vials are considered wastage.

“Following our advice to all hospitals to minimise wastage, the percentage in Tamil Nadu has come down to 3.94%. Vaccination is being provided in more than 4,000 centres across the state. At many centres, many still open the vial and wait for patients, leading to wastage,” said a senior official in the state health department.

Also read: Why people are getting COVID-19 even after getting vaccinated

Earlier, many were reluctant to take vaccines  for fear of adverse reactions.

“Many refused to take the jab when vaccines were opened for people aged 45+. Though in urban areas, many were ready, but in rural areas, the awareness is less. This is the main reason for the wastage,” added the official.

The Centre has released 74.03 lakh doses of Covaxin and Covishield, to Tamil Nadu, which has a population of around 7.62 crore. Of this, 66.74 lakh doses, including wastages, have been used and as of now and 3.05 lakh doses are in stock. Arrangements are being made to supply 1.78 lakh doses, according to the Union Ministry.

Fewer than 1 crore doses (84.98 lakh) are still available with the states/UTs to be administered and 53.25 lakh doses will be supplied to states/UTs in the next few days, the ministry said.