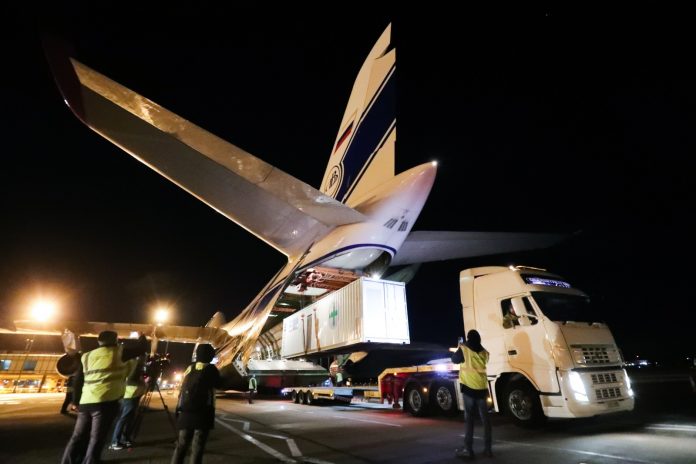 Posting pictures of the aircraft filled with life-saving equipment at Belfast readying to take off for India, UK Foreign Minister Dominic Raab tweeted that we will only beat this pandemic if we work together

The world’s largest cargo plane carrying three 18-tonne oxygen generators and 1,000 ventilators from Belfast in Northern Ireland, is expected to arrive at the Delhi airport on Sunday (May 9) morning at 8 am. This is part of UK’s ongoing support to India plagued by a virulent second wave of the pandemic.

According to the UK Foreign, Commonwealth & Development Office (FCDO), which has funded the supplies, the airport staff had worked through the night to load all these kits aboard the humungous Antonov 124 aircraft. Northern Ireland Health Minister Robin Swann had overseen the loading of the surplus oxygen generators into the giant cargo plane at Belfast International Airport, PTI reported.

The report stated that Swann said that the scenes coming out of India were a “vivid reminder” of the devastation this virus could cause as it showed no sign of abating. After this cargo plane landed at the Delhi airport, the Indian Red Cross will help transfer them to the hospitals.

According to the agency report, each oxygen generation unit is akin to a 40-foot freight container and can generate 500 litres of oxygen per minute. This will mean that 50 patients can use one oxygen generation unit at a time. Swaan said that since oxygen supply is under severe stress, he hoped these life-saving equipments would ease the “pressure and pain” the country was currently experiencing.

These oxygen generators are surplus ones from Northern Ireland that are being sent to India, said UK Foreign Secretary Dominic Raab, adding that they would help hospitals in India to care for COVID patients. “The UK and India are working together to tackle this pandemic. No-one is safe until we are all safe,” he said.

Meanwhile, the UK Health Secretary too said that the situation in India is “heartbreaking”. And, that they would do all that they can to help the Indian authorities to “turn the tide on this dreadful virus”.

Earlier, UK had sent 200 ventilators and 495 oxygen concentrators to India last month, also funded by the FCDO. India is grappling with a severe shortage of vital medical equipment and supplies, and UK is among several countries that are offering their surplus stocks during the crisis.

Israeli Foreign Minister Gabi Ashkenazi while confirming the dispatch had told the media that they stand by India the way India stood by them in the first week of the corona crisis, when they facilitated the arrival of vital medical equipment to Israel. “In the coming days, further plane loads of aid are expected to take off from Israel to our friends in #India,” Ashkenazi had tweeted.

“Cooperation with US continues! Another flight from USA arrives carrying over 1000 oxygen cylinders, regulators & other medical equipment. Third shipment in a period of 2 days adding to our oxygen capacities. Grateful to US for its support,” tweeted Arindam Bagchi, official spokesperson, Ministry of External Affairs.

USA is expected to send supplies worth more than US $100 million to India, including 1,000 refillable oxygen cylinders, 15 million N95 masks, and one million rapid diagnostic tests. The Biden administration has also redirected its own order of AstraZeneca manufacturing supplies to India, which will allow it to make over 20 million doses of the COVID-19 vaccine.he world’s largest cargo plane carrying three 18-tonne oxygen generators and 1,000 ventilators from Belfast in Northern Ireland, is expected to arrive at the Delhi airport on Sunday (May 9) morning at 8 am. This is part of UK’s ongoing support to India plagued by a virulent second wave of the pandemic.

UP govt gives 42 ventilators to 2 hospitals, 28 found to be defectiv...