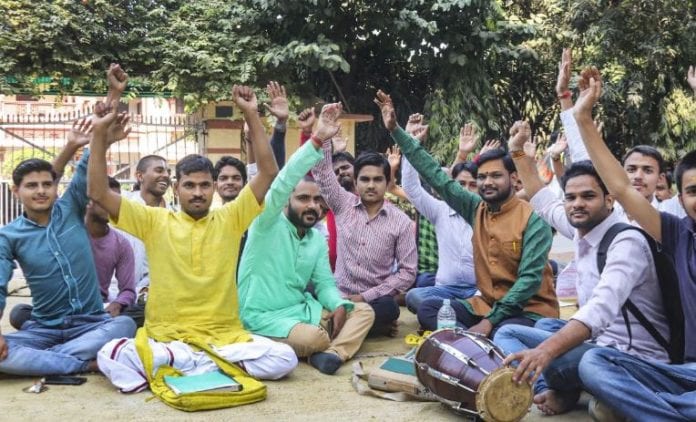 A group of Banaras Hindu University (BHU) students protesting against the appointment of a Muslim professor at the Sanskirt department ended their dharna on Friday (November 22).

The university had announced on Thursday (November 21) that classes at the department would resume, indicating that the stir against the appointment of assistant professor Feroze Khan had ended.

“The Faculty of Sanskrit Vidya Dharma Vigyan (SVDV), Banaras Hindu University, has reopened,” the BHU tweeted on Thursday. But the protest by the small group continued for some hours on Friday, till an announcement by the agitating students themselves.

The protesters, mostly from the RSS-affiliated students union ABVP, have been demonstrating against Feroze Khan’s appointment, saying only a Hindu can teach Sanskrit at the university in Uttar Pradesh’s Varanasi.

However, a student leader, Chakrapani Ojha, said they were not against Khan, but were continuing their dharna against the “irregularities” in the appointment process of the varsity and also for the “violation” of BHU Act, 1915, that states a non-Hindu cannot teach in the SVDV.

According Ojha, the dean of the Sanskrit literature department met the students on Friday and assured them of an inquiry. The student leader said that they would again resume their protest if no action was taken within 10 days into the irregularity in the appointment process of the assistant Sanskrit professor in the SVDV.

Later on Friday, the RSS said it did not agree with the students. In a statement, RSS leader Jai Prakash Lal said a meeting was held with organisation leaders in Varanasi, in which they held that the opposition by a section of BHU students was wrong. Lal added that they do not support the students staging dharna in the campus on this issue.

Although the university has backed him, Khan has been unable to take classes.