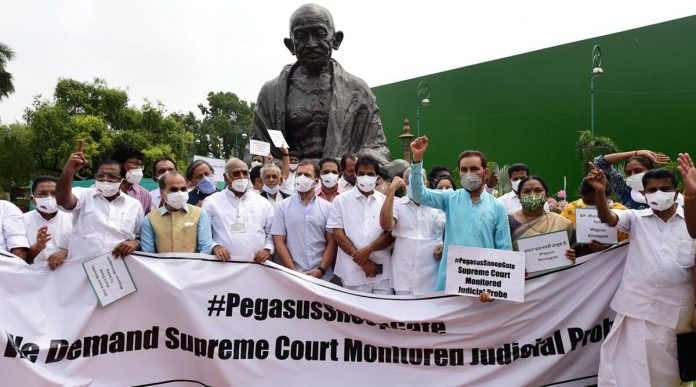 The Congress leader said he is not a ‘potential target,’ yet his phone is 'clearly tapped'. PTI Photo

Congress leader Rahul Gandhi has demanded the resignation of Home Minister Amit Shah and a thorough investigation into the Pegasus revelations, saying the spyware “is a weapon classified by Israeli states to use against terrorists”.

“The PM and Home Minister have used Pegasus against us. This has to be investigated and the home minister must resign,” he said.

The Congress leader on Friday (July 23) alleged that all his phones were tapped and that his security men had been asked to report on everything. He also demanded a court-monitored inquiry, which was rejected by the government.

“I am not a ‘potential target’. My phone is tapped, it is clearly tapped. Not only this phone, but all my phones are also tapped,” the Congress leader told the media at Parliament. The Congress and other opposition parties have raised loud protests on the snooping scandal.

A leaked database of Israeli company NSO’s spyware Pegasus has alleged that Rahul has been on the list of potential targets for snooping. The spyware is sold only to governments. Opposition leaders, two Union ministers, businessman Anil Ambani, a former CBI chief, a virologist and 40 journalists are on the list of 300 phones from India. It is not established, however, that all the phones were hacked.

“I get calls from Intelligence Bureau people who tap my phone. They say your phone is being tapped. My security people tell me they have to debrief what I say. I am in no pretensions that I am tapped,” said Rahul, adding that even his friends received calls informing them that phones were tapped.

“I am not afraid. I don’t get intimidated. In this country, if you are corrupt and a thief, you will be afraid. If you are neither of those, you have nothing to be afraid of,” he said.

The government has denied opposition allegations of snooping and has denied any role amid daily revelations of potential targets.