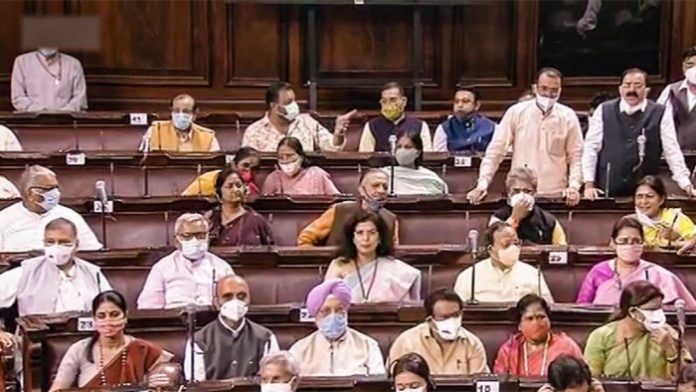 The Rajya Sabha witnessed stormy scenes as Opposition members charged to the well of the house raising slogans. Pic: PTI

The monsoon session continued to be rocky, as the Upper House witnessed stormy scenes on Thursday (July 22) as TMC leaders and other Opposition party members rushed to the well, tore papers and flung them in the air, even as the IT Minister Ashwini Vaishnaw was reading out a statement on the alleged snooping by the Centre using an Israeli company spyware Pegasus.

According to media reports, the Centre is planning to move a suspension motion in the Rajya Sabha on Friday against TMC MP Shantanu Sen seeking his immediate suspension from the house for his “intimidating” behaviour towards another member of Parliament.

A News18 report said that a major commotion had reportedly broken out in the Upper House, after Sen snatched the papers from the hands of the Communications and Information Technology Minister Ashwini Vaishnaw and tore them. This forced the minister to stop reading the statement and he laid the copy of the statement on the table of the House.

The chair can decide to suspend the MP for one day, one week or the remaining part of the session. The government is also considering to move a breach of privilege motion against Sen, which can be a long drawn process and the complaint can be sent to the privilege committee, said the News18 report.

Unparliamentary behaviour at the RS

With the Opposition members shouting slogans, Deputy Chairman Harivansh tried to request the members to stop indulging in “unparliamentary behaviour”, adding that the report had been laid on the table of the house and it can be discussed. However, the Opposition members continued to raise slogans and soon after the deputy chairman Harivansh adjourned the proceedings of the day.

Also read: Not sure about my position after July 26, says Yediyurappa

However, media reports said that the statement the IT minister was reading out was similar to what he had said on July 19. On that day, the IT minister had said that the reports in the media about journalists, political rivals and critics of the government being targeted through surveillance using Israeli company NSO Group’s Pegasus spyware was an “attempt to malign the Indian democracy and its well-established institutions”

The Opposition MPs had disrupted the proceedings in the Upper House earlier in the day as well, which had led to two adjournments and officially listed papers were not allowed to be laid.

Prompting Rajya Sabha chairman M Venkaiah Naidu to observe that members seem to be not interested in discussing people’s issues.

Pandemonium breaks out in Lok Sabha

The situation was no better in the Lower House, as proceedings were repeatedly adjourned amid sloganeering by Opposition members against the three contentious farm laws, Pegasus snooping scandal and other issues. When the House re-assembled at 4 pm after the repeated adjournments, the uproarious scenes continued even as Bhartruhari Mahtab, who was in the Chair, asked the protesting members to go back to their seats.

The protests continued despite the Parliamentary Affairs Minister Prahlad Joshi saying that the government was ready to discuss any topic. “Rajya Sabha had a discussion on Covid…We are ready for discussion on whatever topic you want…Question Hour is a right of every member,” Joshi said according to a PTI report.

However, the Opposition members did not back down, forcing the Chair to adjourn the proceedings for the day. The Lower House was adjourned soon after the Inland Vessel Bill and the Essential Defence Services Bill were introduced, said an Indian Express report.

The Lok Sabha will meet at 11 am on Friday.

Meanwhile, Congress MPs staged protests outside the Parliament demanding repeal of the “anti-farmers laws”, chanting slogans like “do justice to farmers” and “Modi is anti-farmers”.