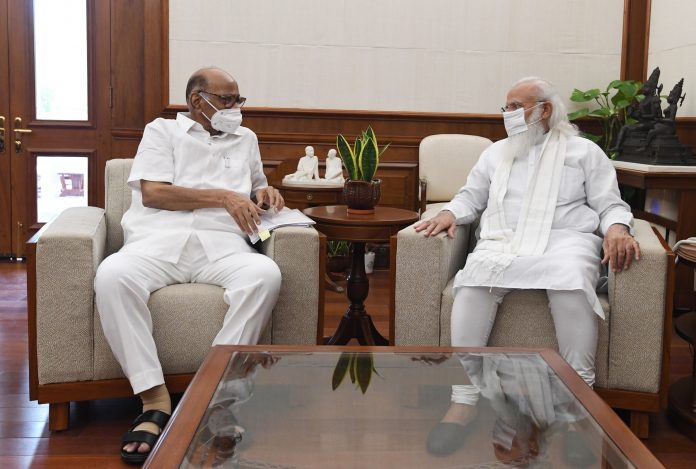 The Pawar-PM Modi meeting lasted more than an hour on Saturday. Photo: Twitter

The one-on-one is said to be the first since 2019 in the run-up to the Maharashtra government formation following Shiv Sena’s parting of ways with the BJP.

Media reports pointed to the unease in the Maha Vikas Aghadi (MVA) government – a three-party alliance dispensation that includes Shiv Sena, NCP and the Congress. On July 15, Maharashtra Congress chief Nana Patole had said cryptically that Pawar held the remote-control of the state government.

The BJP has in recent days amplified differences in the alliance government. There are reports that the MVA was planning to change rules to adopt open voting for the state Assembly Speaker’s election. BJP leader Devendra Fadnavis on Thursday (July 15) asked why the state government was scared despite having a majority in the House.

Fadnavis said the move showed that the MVA allies lacked trust in one another. Fadnavis said the MVA government would collapse under its own weight, and asserted that once that happens, his party would provide an alternative government in the state.

The Assembly speaker’s post has been lying vacant since February after Patole resigned to take charge as the state Congress chief. As per tradition, the speaker is elected unopposed.

However, after the meeting with PM Modi, Pawar said no politics was discussed.

During his interaction with PM Modi, Pawar said he had sought time over the letter about cooperative banks that are now being monitored by the Reserve Bank of India.

Banking Regulation Rules were cleared by Parliament in September 2020. Pawar reportedly told the PM that this is intruding into the state’s rights as cooperative banks are under the ambit of the state government.

Over the last couple of days, Pawar has had meetings with Piyush Goyal, the newly-appointed Leader of the House in Rajya Sabha, and Defence Minister Rajnath Singh.

Pawar is also considered the main architect of the opposition unity against the BJP. The veteran politician is known for his goodwill across party affiliations.

As Kishor meets Gandhis, buzz grows about over his ‘larger role’ in ...