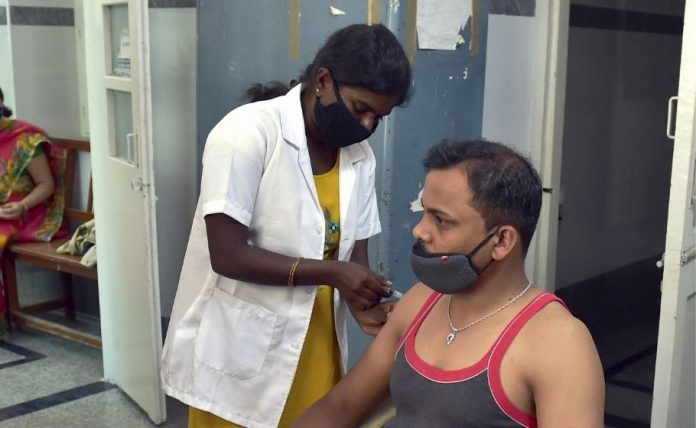 India’s COVID tally of over 1.45 lakh cases has set a dubious record among worst-hit countries, and has triggered a war of sorts between the BJP-ruled Centre and the non-BJP-ruled states over the vaccine shortage.

On Saturday (April 10), Punjab Chief Minister Capt Amarinder Singh joined his Rajasthan counterpart Ashok Gehlot in warning the Centre of limited stocks of vaccines that could last not more than a week. Singh has gone to the extent of blaming the “massive anger among the people of the state” over the new farm laws for a slow rate of vaccination.

“Punjab has only five days of supply (5.7 lakh vaccine doses) left at the current levels of vaccination — between 85,000 and 90,000 people per day. Hoping the Centre will send fresh batches of vaccine supply soon. If the state is able to meet its current target — around two lakh shots per day — then existing supplies last only three days,” Singh said in a statement.

Gehlot talked about a worse condition: he said vaccine stocks would run out in 48 hours or less, urging the Centre to send 30 lakh doses immediately.

Amid all this came a statement from Adar Poonawalla, the CEO of the Serum Institute — the Pune-based firm which is the world’s largest vaccine maker by volume, and which supplies around 65 million doses of Covishield per month. Poonawalla has said the existing production capacities were “very stressed.” He said the SII needed ₹ 3,000 crore and three months to increase production. This has drawn a sharp reaction from AIIMS chief Dr Randeep Guleria who said it was not “rocket science” to expect high demand and that SII should have been better prepared, media reports said.

On the other hand, Union Health Minister Harsh Vardhan on Friday (April 9) said there was no vaccine shortage in the country. “All the claims of states are baseless. The centre is supplying vaccines to all states equitably irrespective of the ruling party. The Centre is working very hard in controlling the pandemic and speeding up the nationwide vaccination programme. States should support it instead of playing politics,” Vardhan said.

“The states reporting to us about shortage are getting the adequate vaccines without delay,” Vardhan said.

On Saturday AAP’s Delhi Chief Minister Arvind Kejriwal also took up the vaccine shortage, saying the national capital had only a week’s stock. Delhi reported over 8,500 new cases on Friday (April 9), making it the biggest single-day spike this year.

Earlier this week the JMM-Congress alliance government in Jharkhand said the state had in only two days of vaccine supplies left and demanded around 10 lakh doses on urgent basis.