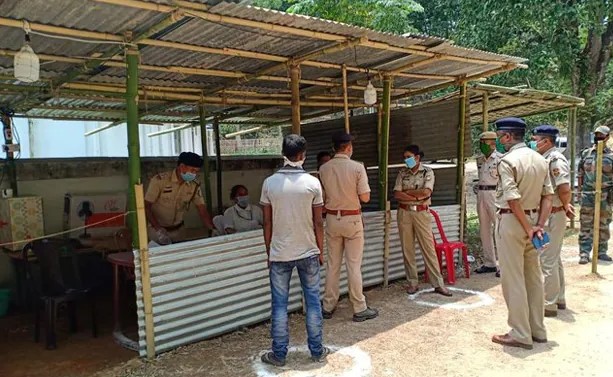 The Tripura Police have assured that the situation is under control.

A mosque was vandalised and two shops set ablaze in north Tripura on Tuesday evening during a Vishwa Hindu Parishad (VHP) rally taken out in protest against the recent violence against Hindus in neighbouring Bangladesh, district superintendent of police Bhanupada Chakraborty was reported as saying in the media.

The state police have provided protection to mosques in sensitive areas, and warned against sending of provocative messages on social media.

“Three houses and a few shops, reportedly owned by members of the minority community, were also ransacked in nearby Rowa Bazar,” Chakraborty reportedly said, assuring that the situation is under control.

“North Tripura District Police is taking lawful action in c/w incident happened today. Situation is under control. Some people are spreading rumours and circulating provocative messages on social media. it is appeal to all not to believe such messages and maintain peace,” tweeted the Tripura Police.

“Action will be initiated against those who are circulating rumours on social media platforms and are trying to disturb peaceful environment,” the police said.

The opposition CPI(M) condemned the incident, saying miscreants were trying to disrupt communal harmony in the state.

On Friday, the Tripura Jamiat Ulema-e-Hind had alleged that some mosques and minority habitations in parts of the state had come under attack after the violence in Bangladesh and asked the state government to act against the miscreants.

The Wire reported that more than 12 people including three police officers were injured in a clash between police and right-wing groups last Thursday in the Maharani area under Udaipur sub-division of Tripura’s Gomati district. The police had denied the right-wing groups permission to hold a protest rally against alleged attacks on minorities in Bangladesh.

On Thursday, around 13 organisations had held a large protest rally in Agartala and submitted a deputation to the Bangladesh assistant high commissioner’s office demanding that the authorities identify and act against people involved in the attacks on minorities in Bangladesh.

SRK thanks Paulo Coelho for ‘legendR...