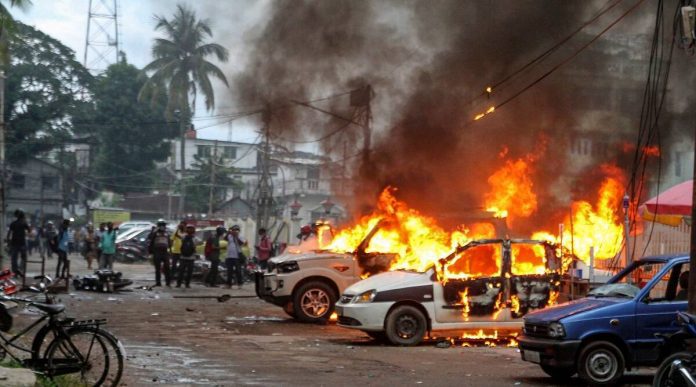 Having completed exactly three and half years in power in Tripura, the ruling BJP is being forced to confront the growing challenge of an anti-incumbency wave sweeping across the the state. It is largely due to the outcome of the unabashed political violence the party has unleashed on the state and also due to its main rival the CPI (M), and the fringe player Trinamool Congress.

The realisation that the party’s base or whatever is left of it is rapidly eroding, the BJP, mainly comprising the deserters from the Congress seems to be pursuing a policy of simply clubbing the Opposition, including the media into silence. What has probably pushed the BJP to embark on this suicidal course is the recent debacle they faced in the elections to the tribal autonomous district council (ADC) in April this year.

The party is also worried about the upcoming state-wide civic polls slated to be held in December this year.

The writing is on the wall that the BJP will lose most of the seats in the twenty civic bodies in the state, including the 49-ward Agartala Municipal Corporation (AMC) since it will not be feasible to manipulate the polls in urban areas.  To worsen matters for the BJP, the media is up in arms over the murderous attacks on 28 media persons over the past one year and the victimisation of the independent media that refuses to toe the official line.

The nature of political violence that the BJP launched within days of coming to power has also bordered on the bizarre: for inexplicable reasons, Tripura Chief Minister Biplab Deb had ordered the demolition of all the offices of the Opposition parties, including those located on ‘Jote’ land.

Also, in an outburst of iconoclastic exuberance the statues of Lenin and other Marxist stalwarts were uprooted. Moreover, a new record was set with attacks on Opposition party workers and their houses were set on fire leading to destruction of properties.

Veteran CPI (M) MLAs Sudhan Das, Badal Chowdhury (who was also a minister for two decades) were assaulted and injured. The leader of the Opposition Manik Sarkar was attacked in July in south Tripura, while the president of IPFT, BJP’s partner in the state’s coalition government, and revenue minister Narendra Chandra Debbarma also came under attack in Sipahijala district. What is worse is that the police took no action in any of these cases.

The latest round of attacks on CPI (M)’s two key offices, as well as on the office of a media house in the heart of Agartala town on September 8, have also rattled the entire state.

Besides, the BJP party itself is riven with factional dissent from the day the new government took oath of office on March 9, 2018 . Before the Assembly polls, the party’s prospects were greatly bolstered by the defection of six influential Congress MLAs to the BJP. But once the BJP came to power, only Sudip Roy Barman, a five-time MLA and the most educated leader as a B-Tech and LLB, was allotted the ministry of health. Though, he had aspired for the post of the CM.

The situation took a turn for the worse, the Tripura CM Biplab Kumar Deb, a political greenhorn and first-time MLA, had formed a cabinet of only nine ministers, despite being constitutionally empowered to constitute a 12-member Council of Ministers.

Sudip Roy Barman’s was the lone voice of dissent on relevant issues in successive cabinet meetings, even though Deb tried to assert control according to his whims and fancies. Finally, Barman was dropped from the ministry despite his sterling work in May 2019, sowing the seeds of a larger dissension which continues to grow by leaps and bounds.

After many dissident MLAs and party’s neglected old-timers complained, the BJP high command deputed a team of three observers headed by B L Santosh to take a stock of the situation in Tripura. During their two day visit to the state, the team recorded the views of 23 out of the 36 BJP MLAs against Deb’s continuance as CM. The report was allegedly considered by the Central leadership to the extent they were taking steps seeking a replacement.

But the Union home minister Amit Shah reportedly turned out to be Deb’s saviour for extraneous reasons.

All that happened was a ministry reshuffle on August 31 with the induction of three new ministers. But the exercise left more MLAs disgruntled because Deb had promised many MLAs that they would be inducted in the ministry. Sudip Roy Barman, despite being offered to be reinducted in the cabinet, flatly refused on the ground that he would not again become a minister under Deb.

Similarly, confusion and dissent prevails within the local BJP unit now headed by Deb’s hand-picked man Dr Manik Saha, a reputed dental surgeon with no political experience. The BJP leadership had transferred RSS ‘Pracharak’ Kishore Barman from north Bengal to strengthen the party in Tripura but his role has yet to be defined, as Deb is opposed to changing the party president to be able to retain his overall supremacy.

Apart from all this, the BJP government has failed to deliver on its tall pre-election promises listed out in the so-called ‘Vision Document’, released exactly a week ahead of the 2018 Assembly polls by none other than the late BJP leader, Arun Jaitley. Out of 299 commitments the BJP had made, only one promise has been fulfilled and that too partially. This pertains to upgradation of pay and allowances of employees.

Meanwhile, the remaining 298 promises seem to have sunk into oblivion.

In this bleak scenario, made bleaker by lack of employment opportunities, serious law and order problem, rural distress and acute poverty in the hilly interiors dominated by tribals, the only course left open for the BJP to curb the growing anti-incumbency and challenge from the Opposition parties, which includes the Trinamool Congress, is to perhaps opt for the recourse easily available to them – political violence.

The CPI (M) which is the primary Opposition in the state still has its 40 per cent committed voter base intact, while the frequent forays of Trinamool leaders and ministers from West Bengal have become a new headache for the ruling party in Tripura. Political violence which is endemic in Tripura has therefore raised its ugly head and is likely to continue till the next Assembly polls.

What has been happening since September 6 is by now known across the country. But what is not publicised is that Tripura is the only state where the leader of the Opposition, a former chief minister at that, Manik Sarkar was forcibly prevented from visiting his own constituency.

Already, several CPI (M) MLAs like Sudhan Das, Badal Chowdhury , Ratan Bhowmik as well as Manik Sarkar and a significant number of party workers have come under attack in order to deter them from political activism.

Having failed on all fronts, the BJP government and party have chosen the time-tested, well-worn path of political violence to cling to power as well as to retain it in the next Assembly polls in February 2023. But, that may well turn out to be a mirage considering the government’s disastrous performance over the past three and half years.