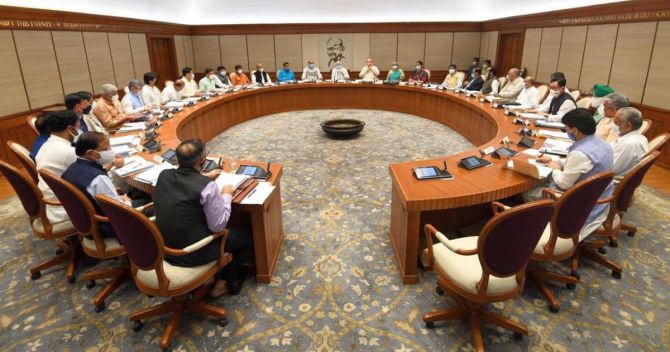 The meeting comes two days after the Cabinet Committees were reconstituted by the Union Government on Monday.

Prime Minister Narendra Modi on Wednesday (July 14) called the first in-person meeting of the Union Cabinet in more than a year. The meeting, which was called at the PM’s official residence, assumes importance mainly because it was called ahead of the Monsoon Session of Parliament that starts on July 19.

This is the second cabinet meeting after the Union Cabinet reshuffle that happened on July 7.

In the Wednesday meeting, PM Modi told his cabinet colleagues to ensure the nation’s fight against COVID-19 stays on course and no complacency seeps in. He was speaking in the backdrop of photos and videos of crowded tourist places, people abandoning masks and least concern shown for social distancing norms. Modi reportedly said that countrymen disrespecting COVID-19 protocols was not a “pleasant sight”.

The meeting comes two days after the Cabinet Committees were reconstituted by the Union Government on Monday.

The CCPA is a powerful committee which takes decisions on political strategy.

The Monsoon session of Parliament will be held between July 19 and August 13.