Despite India being the largest migrant-sending and remittance-receiving country in the world, deliberations on the rights of Indian migrant workers abroad are missing from the ongoing three-day-long 17th Pravasi Bharatiya Divas (PBD) meeting in Madhya Pradesh.

When some nine million Indian migrants are working in the Arab Gulf under the exploitative Kafala system facing challenges on different fronts, the plutocratic PBD meeting has ignored that.

In the three-day agenda, Indian diasporic migrant workers’ issues have not been listed.

Talking to The Federal, Swadesh Parkipandla, from Pravasi Mitra Labour Union in Telangana, said that “there was no platform to discuss migrant workers’ issues in the three-day PBD.” Swadesh had travelled to Madhya Pradesh from Telangana to attend the three-day Pravasi Bharatiya Divas.

On January 10th evening, talking to The Federal from Indore, Swadesh said that “I raised migrant workers’ woes on 9th and 10th in the forum where the ministers and other higher officials were present. But didn’t provide us an answer.” 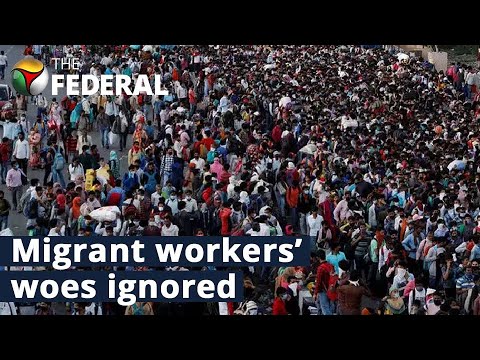 Also watch: The migrant labourers behind the FIFA World Cup at Qatar

Unfortunately, still, Indian migrants are duped by crook agents denying them a Surakshit and Prashikshit migration.

And when the digital PBD exhibition on ‘Azadi Ka Amrit Mahotsav – Contribution of Diaspora in Indian Freedom Struggle’ was opened by the Indian government, unfortunately, failed to see the struggle of Indian migrants’ who are subjected to wage theft.

Among the many vital issues faced by Indian migrants abroad, debates on lack of an updated Emigration Bill, wage theft and student migration are missing in the three-day PBD.

Unfortunately, India is still managing migration with an Emigration Act brought in 1983 by replacing the existing 1922 Emigration Act despite the entire migration flow has changed globally.

After the merger, diplomacy and trade ties were prioritised, and Indian migrant woes are forgotten.

Out of the nine million migrants abroad, some eight million Indian workers earn only a monthly salary between ₹15,000 and ₹30,000 under harsh working conditions. They face modern-day slavery and other rights violations.

“The 1983 Emigration Act doesn’t provide many workable solutions for the Indian migrant workers who face rights violations at workplaces in a foreign country. Additionally, the Act doesn’t address the trafficking of potential migrants by rook agents and fails in rehabilitating returnee migrants,” Sr Josephine Valarmathy, a migrant rights activist with National Domestic Workers Movement in Chennai, told The Federal over phone.

Twice, the Indian government sought suggestions from the public and civil society organisations to update the Act but hasn’t placed it in the parliament yet.

Thousands of Indian migrant workers in the Arab Gulf were robbed of their salaries following the outbreak of Covid-19 when they were repatriated in a hurry from their workplaces to India.

Wage theft is the non-payment for overtime; denying workers their last paycheck after they leave a job; not paying for all of the hours worked; not paying minimum wages; not paying a worker at all, and not adhering to the terms of the contract.

Wage theft was in the pre-Covid-19 time too, however, it wasn’t visible like it is following the Covid-19 outbreak. Workers even who have worked for 30 years in the Arab Gulf were forced to return without their end-of-service benefits and pending salaries.

“Unfortunately, the Indian government failed to record the wage theft from returning Indian migrants and eventually lost an opportunity to fight for justice. Interestingly, even the Philippines recorded their migrant workers’ wage theft and are fighting for justice,” Bheem Reddy from Andhra-based Emigrants Welfare Forum, told The Federal over phone.

Recently, even the United Nations (UN) has recognised wage theft as a rights violation. However, India has ignored the issue despite being the largest remittance-receiving country forgetting that inward remittances play a vital role in the economy and in achieving sustainable development goals.

A recent survey done by INTO, a global higher education agency, revealed that almost 8 in 10 Indian Gen Z students (76%) looking to study abroad plan to work and settle overseas after completing their international degree.

The survey also showed that a significant proportion of Indian students (41%) would still prefer studying overseas even if the same quality of education was offered by Indian universities.

India is the world’s second-largest student-sending country after China with the number of Indian students abroad having increased four times in the last 14 years. According to MEA data, 1.3 million Indian students are studying all over the world.

Students’ migration of such magnitude has become a major source of capital and brain drain for India while hugely benefitting the economies of the advanced countries.

Ninety per cent of student movement from India is concentrated in five countries of which the United States is by far the largest recipient, receiving more than half of the expatriate Indian students, followed by Australia and the United Kingdom.

Talking to The Federal, Mini Mohan, a migrant rights activist, said that “lack of a student migration policy in place was exposed during the Russia-Ukraine war. The repatriation of the Indian students was delayed, and complicated, and the returned students are still struggling to continue the rest of their studies in India due to norms set by Indian universities.”

She was involved with the Indian government and other organisations in coordinating the rescue of Indian students from Ukraine during the war.

Addressing the gathering, Modi remarked that the Pravasi Bharatiya Divas is taking place in all its glory after a gap of four years and highlighted the significance and joy of personal interaction.

However, the PBD agenda reveals the woes faced by Indian migrants during Covid-19, lessons learned from the same, and ways forward weren’t discussed, unfortunately.

Britcoin? UK gets closer to launching a digit...